Mario's still got it.

It's amazing how after decades of living in the gaming world, Mario constantly manages to amaze and impress. He revolutionized with Super Mario Bros. and Super Mario 64, he revitalized with Super Mario Galaxy and its sequel, and now he's returned once again with his latest installment in the main Mario branch, Super Mario 3D World. Does it manage to live up to the Mario name? Oh absolutely.

The story is, as you would expect from a Mario game, pretty simple and barebones. Trouble starts brewing once again in the Mushroom Kingdom when Mario, Luigi, Peach, and Toad happen across a slanted clear pipe during a fireworks showing at Peach's castle. After Mario and Luigi fix it up (they actually do some plumbing for once!), the pipe begins to eject several different items and a fairy-like creature called a Sprixie. The creature claims to be a princess of her people, and tells Mario and co. about how Bowser has kidnapped six other Sprixie princesses. After asking for Mario's help, she too is captured when Bowser suddenly shows up from out of the pipe and traps her in a bottle. Mario and his friends follow Bowser down the pipe, and their adventure begins. 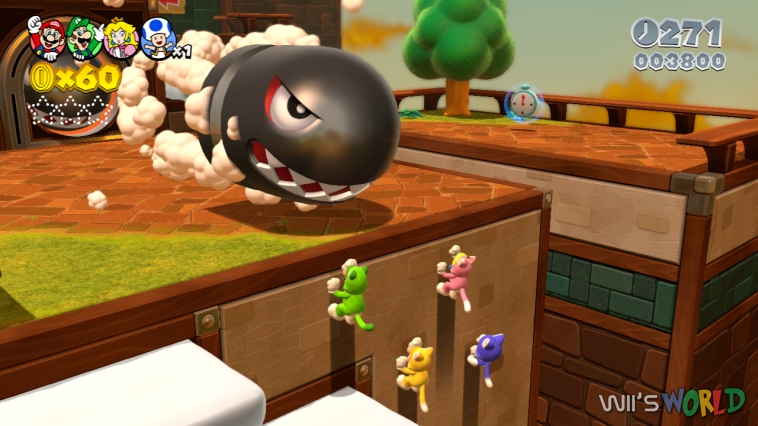 The main new feature here is of course the new 4-player co-op mode, with playable characters including Mario, Luigi, Peach, Toad, and another unlockable character that will remain unspoiled in this review. This mode has 2-4 players traversing through any of the levels in the game they so choose to partake in. The neat thing about this feature is that, like with New Super Mario Bros. U, the co-op can either be cooperative or competitive - depending on how the players choose to play. Care more about getting the most coins and getting to the flagpole first? Not a problem! You can happily screw over other players by throwing them down pits or constantly jumping on their heads and focus on being the best if that's your desire. Or maybe you just want to help other players beat a level they're stuck on? Go right ahead! Using teamwork, players can do things such as reach a high platform that one player couldn't previously reach before alone, allowing access to unexplored parts of a level. To sum it up, the co-op works great, and is tons of fun.

But what about the levels themselves? Do they meet the high standards set by previous titles in the franchise? While they may not be the absolute best selection of levels in a Mario game ever, they are still cleverly designed and insanely fun to play through, regardless of whether or not you're playing alone. From jumping across platforms that flip with every jump you take to riding Plessie down a level similar to that of a Mario-themed water-slide, the levels also have a good bit of variety to them that helps keep the game fresh and alive. 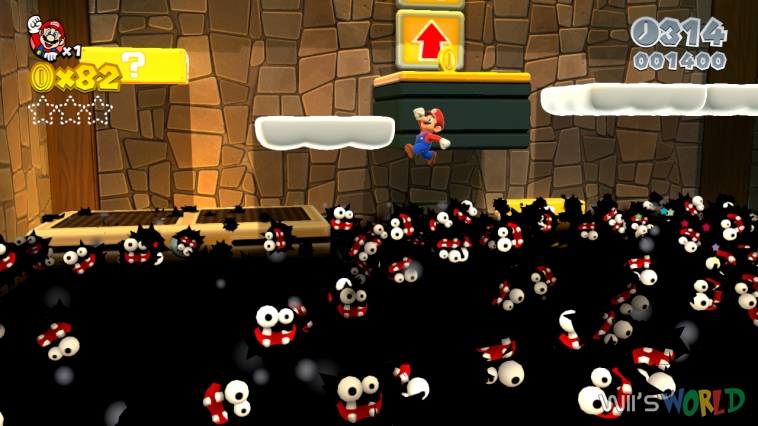 Difficulty-wise, the game is pretty easy throughout its main quest, though maybe a bit harder than Super Mario Galaxy. You will notice a steady increase of difficulty as the game progresses, with the later levels proving to be the harder ones as most would expect. However, those who crave a good challenge aren't necessarily left out of the picture. After you beat the main quest, players are treated to a bonus world filled with more challenging levels, and if that's not enough for you, there are three more bonus worlds you can unlock with even more challenging levels to discover.

Super Mario 3D World offers up a few new power-ups as well. The most prominent one is the cat suit, which is obtained by acquiring a Super Bell. The cat suit allows players to run up walls for a short period of time and features its own unique, cat-like attacks. It doesn't change up the gameplay a significant amount, but it's still enjoyable to use. Another new power-up, the Double Cherry, allows players to form duplicates of themselves that move exactly like the main character who acquired it. The more you get, the more duplicates there will be. It can get confusing when you're trying to pinpoint the real Mario amongst a bunch of duplicates, but the power-up does succeed in spicing things up a little bit.

Musically, the game's not bad at all, although the soundtrack is overall not up to par with Super Mario Galaxy's OST. The music found here is sort of a jazz-meets-Mario kind of mix-up, and it does work, just not as good as past Mario games' soundtracks did. Regardless, the soundtrack fits the overall mood of the game, and helps the levels feel more energetic and alive. 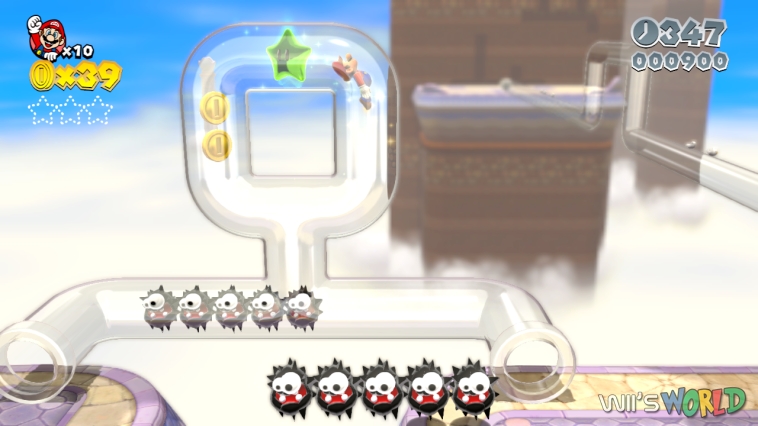 From a visual standpoint, the game looks beautiful. Environments feel vibrant and colorful, the character models look great, and the overall interface of the game is smooth and easy to navigate. Without a doubt, Super Mario 3D World is one of the best looking Wii U games to date.

If you're hoping the game keeps you coming back for more, this shouldn't be too much of a problem. Along with the previously mentioned bonus worlds and secret unlockable character, Super Mario 3D World also has plenty of Green Stars and Stamps scattered throughout each level in the game that players can collect if they want to squeeze some more replay value out of the game. Plus, the co-op might just be too fun for your friends to pass up whenever they pay a visit.

Super Mario 3D World is all-in-all an outstanding game. While it may not be all that innovative for the Mario franchise outside of its co-op mode, it still manages to succeed at just about everything that makes a Mario game so great. If you're a die-hard Mario fan, I urge you to not miss this. If you've never played a Mario game in your life (all those two people), then I highly recommend you play this game anyway just so you can experience fun at its purest form.