And Yet It Moves

And Yet It Moves review

And Yet It Moves is another example of a PC game turned console release, like Cave Story and Super Meat Boy. The makers of AYIM hope to recoup some of their development costs by releasing the game on the WiiWare platform. Will players want it though?

And Yet It Moves can be best described as a combination of 2D platformer and puzzle game. There's no story whatsoever, save that you must guide your character to the end of a level. This character has the ability to run and jump, but it is ultimately you the player who is the most important aspect of the game. 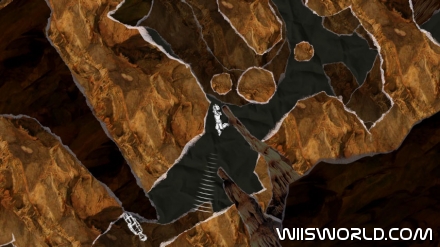 As the player you have the ability to literally control the world itself by repositioning it to any angle in 2D, i.e. the character may start on the floor of an area, but can end up on the ceiling or either the right or left sides; This is the game's hook. Only those who play the Wii version are able to rotate to any angle, making this the definitive version of the game. As if that wasn't nice enough, a variety of control schemes are supported - with the Wii remote, a remote/nunchuk combo and even the classic controller. Sorry Gamecube controller fans, you're out of luck. Because the game's central mechanic involves movement, it could be considered a tailor made Wii title and it shows.

The tilting mechanic also demonstrates just how fragile the player character is and that while the game is fairly short, it certainly isn't easy. Tilting the character a certain distance builds up velocity and momentum not unlike Valve's Portal. Unlike Portal however, if the character isn't significantly slowed before he lands, he literally bursts into pieces. Constant rotation is key to keeping your character alive, but thankfully numerous checkpoints which bring a player back from death in seconds ensure that players won't become overly frustrated. Truly skilled gamers however will be able to make the character fall from the starting point all the way to the very end of the stage.

In early areas you familiarize yourself with the controls by simply guiding the character through narrow passages, overcoming barriers and avoiding obstacles. Eventually however, the developers serve up extremely creative ways of utilizing the tilting mechanic and as a result, nearly every level has something new. In the later stages you'll use the mechanic to move a Gorilla, spread a fire, and break a rock wall to name but a few. Some stages do repeat certain ideas, but for the most part the game remains varied throughout. 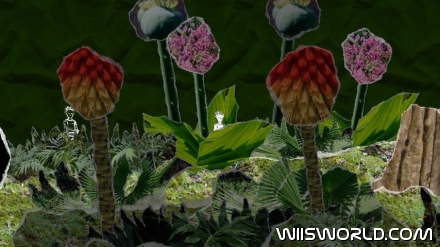 For those who have seen the music video "Take on Me" by A'Ha!, And Yet It Moves has a familiar graphic style. The game world resembles a menagerie of notebook paper and colored cutouts; checkpoints are chalk drawings of the player's character, cut out pieces of paper become the archetypal bottomless pits, and end doors are ink finishes. The look is unique and stylish for a game and it fits the gameplay quite well, making one think that the entire game is nothing more than a person playing with a scene on paper. AYIM is quite colorful, yet some players may get hints of claustrophobia from a world that refuses to go above ground.

AYIM's soundtrack is appropriately esoteric, moody and ambient, yet rather short in scope. At most the game has only seven musical tracks, with some repeating in every stage per game chapter and even in more than one chapter! The same lack of variety can be felt in the sound effects, of which there are few. This combines to an overall lack of sound quantity which ultimately hurts the experience.

Though few, there are some new additions to the WiiWare version of the game to speak of. As mentioned before, the Wii version is the only one which gives full 360 degree rotation, as opposed to the 90-180 degree movement in the PC and Mac versions. Also worth noting are four additional bonus levels with a brand new aesthetic and a great degree of challenge. The game also comes with an achievement system to encourage replaying, a time trial mode and a marathon mode which bunches level chapters together for large sessions. The game is fairly short, but it's the kind of game in which this is upsetting because you want to play more, and not because the developer cut corners.

And Yet It Moves is priced at 1000 Wii points, which is in fact the same price as its PC and Mac counterparts. If you wish for a game which miraculously breathes new life into an already 25 year old genre and proves itself to be immensely creative and fun, look no further.