Dive: The Medes Island Secret could be seen as a natural extension of Nintendo's own Endless Ocean series for Wii. Dive moves the concept of being a deep sea diver to the 2D plane with only one key goal: find as much treasure as possible in the effort to unlock the titular Medes Island secret.

The player controls a diver who is equipped with a diving suit, a pair of diving fins, an oxygen tank, a flashlight for dark areas and a tranquilizer gun to subdue any dangerous sea life. Swimming is accomplished by simply pointing a reticule and holding the B button; double tapping the button gives your diver a brief speed boost but at the expense of his oxygen. Pointing the reticule onto an enemy and holding the A button fires one of the limited tranquilizer darts the gun is equipped with, usually subduing the enemy. The flashlight is turned on by pressing the D-pad to the left and a map appears showing treasure locations if the D-pad is pressed right. At any time, the player can go back to their boat by pausing and selecting to do so. Overall, the control is very precise and well done. 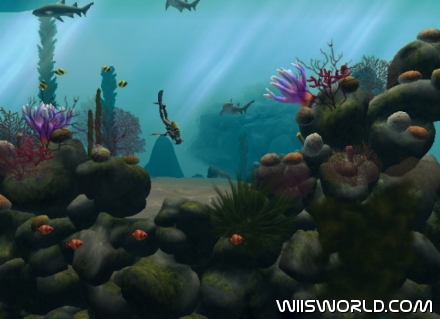 The gameplay is both simple and complex at the same time. Exploration across and below the ocean is the focus of the game. A small radar is provided which shows the player the locations of items such as tranquilizer darts and extra oxygen, nearby small treasures and the general direction of the treasure needed to move on to the next level. While the player searches the ocean floor, numerous hazards and marine life abound, not to mention the near total lack of light on the lower levels of the ocean. Unlike games such as Metroid or Cave Story however, most players will wish to try and avoid combat, as simply touching anything save the ocean or a rock wall will cause a loss of oxygen. If the player loses too much oxygen, they die and start back either from the beginning or at the last checkpoint found. Thankfully, checkpoints are fairly plentiful in Dive and not only can they be seen easily on the map, but also completely refill the player's oxygen. The game can feel somewhat stressful at times before getting used to the various enemy behaviors, yet is hardly ever frustrating and it feels rewarding when enemies can be completely evaded.

While one might think that focusing on big treasures should be the focus of Dive, the smaller treasures are nearly essential if you wish to get to the game's end. Every time you gain a treasure, you gain money. With money comes upgrades to all of your equipment. Most important is the dive suit, upgrades to which eventually allow it to dive at any depth. Also noteworthy are upgrades which allow you to hold more oxygen and darts, flippers which will let you swim faster and a flashlight which literally never runs out of power!

The overall presentation of Dive is outstanding, especially for a WiiWare title. The ocean looks bright and colorful at one moment yet dark and forbidding at others, much like the real ocean we know. The animations, marine life and frame-rate are all terrific. The sound effects are very appropriate, especially the constant breathing which indicates usage of the player's oxygen tank. The music is fantastic, and features light, airy instruments like harps in all of its tracks. 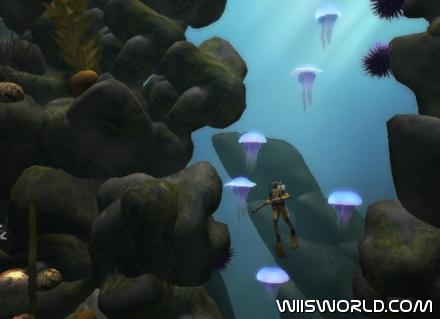 While Dive initially starts on Medes Island, you soon learn that it won't be quite so easy as to just dive to the bottom of the island's ocean and pick up the treasure. The player must trek among many of the world's most infamous oceans and islands including the Bermuda Triangle, the Galapagos and the wreck of Blackbeard the pirate's vessel the Queen Anne's Revenge. There are 9 total areas to explore, each featuring two big treasures, two to three chests of gold and several dozen smaller treasures. Only after gaining nine special dolphin statues will the player be able to open the special door on Medes Island and uncover a secret as old as the Knights Templar themselves.

Dive is an excellent title, but not without its flaws. The biggest occurs when being hit by a hostile bit of marine life; while in most 2D games such as Super Metroid, Cave Story and others a player is allowed at least a few seconds of invincibility or 'flashing time' after being hit, Dive is not so kind. Instead, a player's oxygen constantly drains whenever near the enemies and dangers, with no respite save running. Also frustrating for completionists are glitches which frequently either point one in the wrong direction towards smaller treasures, or blocked passages towards said treasures with no visible method of getting to them. Finally, the game features little to no real story, save some text between levels. It would have been nice to see what the diver which the player controls (the game doesn't actually give him a name) does with the 'wealth and knowledge' he claims to have found.

Dive will last most gamers around five to six hours in order to find the island's secret. Patient completionists will likely spend at least another two to three hours finding all the ocean's treasures. If you enjoy Metroid style exploration mixed with the soothing solitude of the ocean blue, you'll love Dive: The Medes Island Secret.