Heavy Fire: Special Operations incorporates a setting rarely used in video games, namely that of the current conflict in the Middle East. However, the game shies away from the politics of it all to deliver a fairly standard light gun game.

The premise is that the player is a military private in a special forces operation in Somalia. Apparently, the Somalian government wasn't able to keep their terrorist problem contained, and have called in your squad to help. By help, they naturally mean shoot anyone not decked out in special forces gear. 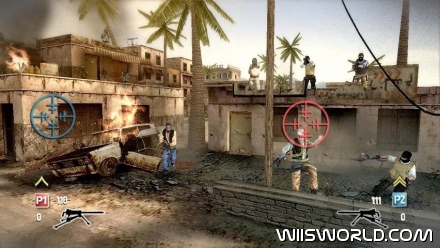 The graphics in Heavy Fire are surprisingly good for a budget game, and come close to Dead Space: Extraction in quality. Animations and the frame-rate are solid, though the colors are fairly muted, making it difficult to spot enemies at certain points.

This is a light gun game, and as such is fairly straightforward. Use the Wii remote to aim a pair of cross-hairs and shoot at enemies, and if the enemies shoot you three times, you're dead - it's as simple as that. Like in traditional light gun arcade games, players are awarded points every time they kill an enemy. Bonus points can be obtained for killing a certain number of enemies in a row without stopping, scoring headshots, taking out enemy leaders and destroying cars and barrels. After collecting a number of points, newer and more improved guns are awarded.

Rather than getting new weapons by shooting part of the scenery, the player instead upgrades to a new gun with unlimited ammunition, usually after a mission. Considering that the standard pistol can take out enemies with one shot, the gun upgrades generally just increase clip size so players don't have to reload as often as with their previous gun. Every gun requires reloading, with the possible exception of the mini-gun used at the beginning of stages 1 and 3 while riding vehicles. There are no stage bosses to mention and the game suffers in this respect when compared to titles such as Dead Space: Extraction and Zombie Panic in Wonderland. 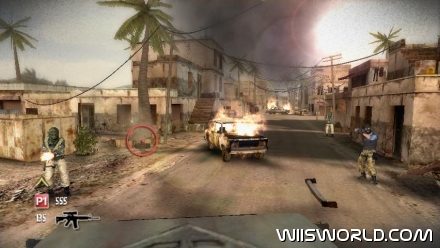 In theory, the player is alerted to enemies attempting to shoot them by a red exclamation point above the enemy heads. For the most part, this works well and rewards the sharp eyed. However, certain enemies will shoot without warning and in the later stages the game feels less like it rewards skill than being cheap and unfair. Buildings and their dark spaces can also obstruct view of enemies and warnings. There are no health power-ups and with only two continues the game can be a bit unforgiving despite its short length. A two player mode is featured, which makes things slightly easier, but this is counterbalanced by both players getting fewer points and less powerful guns.

With the exception of the bland patriotic theme at the title screen, there is literally no background music in the game whatsoever. Perhaps they were trying for a more 'realistic' feel, but even just a stock background tune would have helped the proceedings feel more interesting. The sound effects consist of the same gunfire noises continuously from enemies and allies, and a few miscellaneous sounds for your new guns. Voice samples are also small and simple; there's no chatter whatsoever from your comrades save orders, and the enemy speech largely all sounds like Middle Eastern gibberish.

Like most light gun games, Heavy Fire is fairly short and only about six stages long. Depending on how well the player did, they may gain a position on the leaderboards, again like something you'd find in an old arcade title. The Wii Zapper is frequently emphasized as the accessory of choice for use in the game, though the regular remote remains the most accurate and comfortable controller.

Ultimately, Heavy Fire: Special Forces can be a short, fun time for its low price of 500 Wii points. However, if you can dip just a bit further into your wallet, there are other light gun titles available on both Virtual Console and WiiWare.

Bleh, I don't think we need anymore rail shooters. The work that was done with Onslaught kind of shows that WiiWare titles can be capable of more than a genre that's been way overdone on the system. Still, this is a cheap game that's fun for a little while. By the way I think that it's kind of ironic how you play as a PRIVATE in the freakin' Special Forces lol. What has the military come to?

Sounds good. I really should download this. I always underestimate Wiiware games.

This is great budget game, and fun to play. I recommend it.

You can play heavy fire series with friends- gets even better, but singleplayer is awesome and very hard to play itself.