An impressive game.. for WiiWare.

Jett Rocket is a game that while on one hand could have been a great retail game, would also likely have died in the retail sphere. Available on WiiWare for 1000 Wii points, Jett Rocket can be fun but players may find this difficult to believe due to the game's flaws.

The premise of the game is simple, yet strangely unique. Jett Rocket, while using a Rocket Pack and looking like a Star Wars X-Wing pilot reject, is apparently an environmental inspector. Jett learns from a dolphin friend of his that the Power Plant Posse has set up resource siphoning generators across the landscape and Jett's job is to stop them and ensure that no more damage can be done to the environment. However, it's hard to sympathize with Jett's character or be motivated by the 'evil' of the Power Plant Posse as there is virtually zero plot save the environmentalist message. 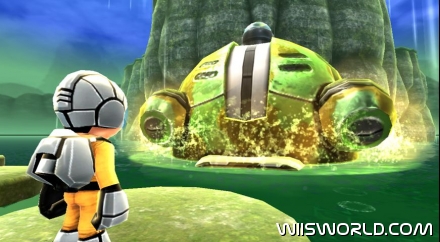 At it's most basic, Jett Rocket is a 3D platformer. In fact, it most closely resembles the infamous 3D platform games of the Nintendo 64/Playstation era such as Mario 64 and Banjo-Kazooie. This means that a good deal of the game is spent less on simply going through the level and getting to the end than on collecting miscellaneous doodads. In this case, Jett collects solar panels. While most of these panels can be obtained simply by going through the level and exploring, others are placed in areas that are needlessly difficult to get to. Thankfully, while the player is required to get more than half of the total solar panels in order to finish the game, most can again simply be acquired by going through the level. Completionists however, will likely be frustrated more than once at the strange locations of the last remaining solar panels, which include pirate treasure-like black letter X's, which can be hard to spot unless paying close attention. Especially frustrating is the fact that there are no level checkpoints, presumably due to memory constraints. Players will get frustrated more than once however, as not only do they go back to the very beginning of the stage when they die, but they also lose every single solar panel they've obtained. There are warps that can be activated which allow players to go back to earlier in the level, but they aren't level checkpoints so they don't have much purpose.

For the most part, the controls are quite good. Jett jumps with the A button and can do a rocket boost in the air after finding rocket fuel. Spread throughout the levels are pads which restore Jett's fuel. The camera can be changed with the D-Pad on the Wiimote, which you'll often find necessary due to the flighty nature of the camera. Finally, Jett attacks on the ground and in the air by shaking the Wiimote. Both ways involve him charging into enemies or slamming into the ground like.. a guided missile (or a rocket!). Occasionally, Jett is given a parachute in order to travel to a new location, which thankfully is controlled not with the Wiimote (like the flight stages in Super Mario Galaxy 2) but with the nunchuck analog stick.

Jett Rocket contains three worlds, which are fairly bland in platformer archetypes. There's a tropical island, a snowy mountain and a swampy jungle. Each has three main stages and a boss stage, all of which involve collecting solar panels. The graphics are extremely impressive for a WiiWare title, and are near Super Mario Galaxy quality in textures, engine and color. Animations are good and the frame-rate is almost always consistent. The music is good and orchestrated to boot, but most of the tracks in the game are simple and fairly bland with no particularly standout numbers. Sound effects are fun and the game includes a small amount of voice acting, but what little there is is terrible and can be compared to a Japanese B-movie or a 4kids anime dub. 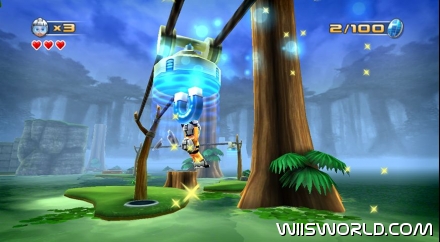 What's especially frustrating about Jett Rocket is that there are signs that if the developers had been given more time and resources, this could have been an amazing retail game. Certain gameplay devices are introduced only once, such as a giant magnet pulley in one level, a rocket guided platform, a slippery hover board and a Jet Ski time trial race. If the game had been released on XBLA or PSN, it is likely that it would have been at least a little longer. Jett Rocket only lasts about four to five hours at most and ends rather abruptly, though the developers at least tried to extend the game's length by including 'awards' i.e. achievements/trophies and unlockable character art; considering though that most of these are unlocked simply by playing through the game, the attempt is somewhat lame at best. The game ends promising a sequel or 'episode 2' but only if the first sells a certain amount. Again, one wonders what the game would be like as a retail release.

Jett Rocket is impressive for a WiiWare game, especially one developed by only about 5 people. If you're looking for a good 3D platform game.. I'd recommend Super Mario Galaxy 2. However, if that simply isn't enough, Jett Rocket is a decent value for only 1000 Wii points. Jett Rocket isn't terrible, but it has a lot of wasted potential on WiiWare.

You're damn right it isn't 'terrible' and based on price alone there really should be no comparisons to Mario Galaxy. The fact that people ARE comparing it to MG is one hell of a compliment to the developers of Jett Rocket. Considering this is only 40mb, it's a great achievement and hopefully provides a kick up the ass to the rest of these 'so-called' developers who think 8-bit games are all we need on WiiWare. You can keep Megaman 10, or better still, send it back to the time it belongs. I'll stick with Jett Rocket, a game that looks great, plays great and for a WiiWare title IS GREAT.