Max and the Magic Marker

Max and the Magic Marker review

Draw your own conclusions (a-haaa).

Press Play's Max and the Magic Marker is a game many of us have been excited about ever since the first trailer and screenshots burst onto the WiiWare scene. Now it's been released in PAL regions, and the Danish developers have kindly gifted me a copy for this review.

The premise is pretty simple. Max is a red headed kid with a vivid imagination, he does a drawing of some freakish purple monster which becomes his antagonist. The story is kept light, the fun here is in the gameplay. The orange marker pen plays a key role in this, you use it to sketch lines on the screen, which then become physical entities in the game world (e.g. you can draw bridges for Max to run across and all manner of other things). A cool concept, and one that Press Play has executed well. 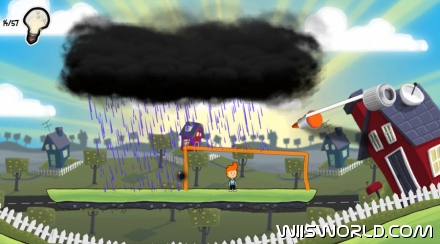 Being a left hander I was immediately presented with a slight dilemma. The game's controls call for you to handle Max's movement with the Nunchuk's thumbstick and use the Wiimote to draw on-screen with the marker pen. To me, both of these tasks feel more natural with the left hand. I switched back and forth a few times, but ultimately decided that accurate pen control was most important.

The overall feel of the pen and ink mechanic is great, it works as you would expect it to. Max's running and jumping moves are a little less satisfying, he builds up speed very quickly and using the Z button to jump is awkward, making the many platforming sections a bit fidgety. To counteract this, you have the ability to freeze time whenever you like so you can draw something in to save Max's skin. Play is spread across three worlds, each one having five levels. Numerous pickups are scattered through the levels, like glowing orbs (used as a 'score'), ink to fill up the marker and secret blobs, which are usually in hard to reach places or obtained by doing some special action.

The levels are generally quite long, but they're broken up by checkpoints, at which the purple grinch steals all your ink. Emphasis is placed on both platforming and puzzle solving. Hazards include purple minions (which can be killed by dropping ink on them from a height), spikes, water, electric rays, pressers, and simply falling down pits. In addition to all the things you can draw yourself, constructs like gushing geysers, see-saws and conveyor belts must be mastered to let Max progress onward. In later levels, ink is often used to press down multiple switches and open chains of doors. There are also a few sections where Max has to run at speed while being chased by giant cogs (Indiana Jones stylee), these are fun and don't use the marker pen at all. In all I'd say there's ample variety in the play to keep you entertained, culminating in a boss fight with the purple grinch himself. 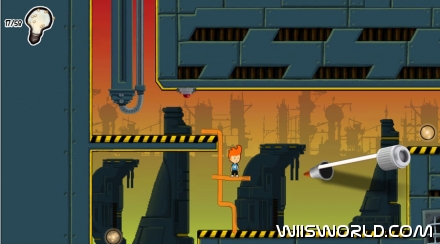 The graphics are very much 2D - flat and cartoony. They suit the game well. The environments are colorful and fun to look at, particularly the first world "Sweet Home". Max himself seems well animated, as do the purple enemies and various contraptions in the game world.

If there's one area I'm disappointed with Max, it would have to be the music. The tunes used feel lackluster to me, in some ways dreary, and fail to really give the game the full impact it deserves. After completion, you're given a secret code to download the soundtrack in mp3 format from the official website. I guess the tracks could be described as some kind of Jazz, there's a lot of horn used anyway.

In terms of difficulty curve, the developers have done a good job. I imagine most casual players would be able to finish the game after putting in some effort, but collecting all of the optional orbs and secret blobs will provide a challenge for core gamers too.

In all, you can expect around 5 hours of gameplay. That doesn't seem like a lot, but the experience is at least fun. Max and the Magic Marker is an ambitious game, one I wouldn't feel bad about recommending.