Dive into the world of shadows. But only some of you.

Puzzle games have swarmed the WiiWare platform as developers find that after inventing a unique and innovative formula to base a game around, the rest of the work is methodical and fast. Ordinary puzzle games offer little in story, setting, and usually music as well, but what they lack in these areas they attempt to make up for with a play style that remains addictive even after hours of play.

ShadowPlay fits an interesting area in the puzzle genre, one that tests the player's imaginative resourcefulness. The challenge level of this game varies between people that have good amounts of creativity and those who have a difficult time deciphering images and shapes. I certainly discovered that I'm the former after ShadowPlay was graciously gifted to me by DeepFried Entertainment (along with a spiffy hat). As previously mentioned, it is very important for a puzzle game to have an attention-grabbing concept, and while ShadowPlay certainly has a unique one, an extended amount of enjoyment is dubious. 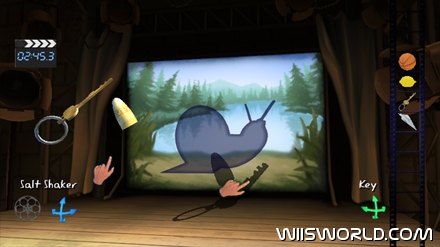 Anyone who has ever made shadow puppets knows the concept. Use an object (or multiple objects) to project the shadow of an altogether different object. This is the gimmick of ShadowPlay, the function, purpose, and goal. Using a preset list of everyday items, the player must match their combined shadow to the shadow of some other object. Each level has a different goal shape and list of usable objects. Depending on how closely the player can match the object, he or she will be able to end the round with a bronze, silver, or gold film reel (basically this game's medal reward). There's no time limit, but you are at least encouraged by a stopwatch to complete the shadow in as little time as possible. A strong concept, but there's not much beyond that. Levels simply get more difficult as they go on, increasing the complexity of the goal shape and the objects used to fill it in.

Control-wise, the experience is a bit of a mixed bag. For one, it fully utilizes Wii MotionPlus as a means of rotating the objects. This works well for the most part as the object moves one-to-one with the Wiimote. However, the object will not match the exact angle of the Wiimote unless the rotation mode is turned on exactly when the player tries to match the two up. It would have been nice if the objects were to snap to the angle of the remote automatically. 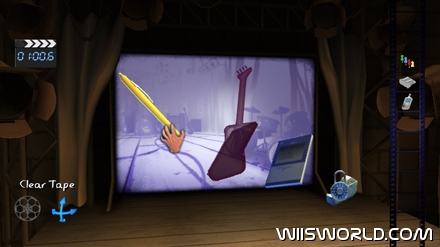 Other minor control issues aside, ShadowPlay was enjoyable for a time. It has a unique premise, but individuality and quirkiness don't automatically translate to an addictive experience. And in the field of addictiveness, ShadowPlay doesn't pass with flying colors. It's certainly a challenge to get through the whole game, but it has an interesting ability to make the player angry at him or herself instead of at the game when items placed just don't fit the shape. It's the kind of thing where the person who designed the stages won't always think the same way as the person who ends up playing it.

Transitioning straight from the last point, ShadowPlay simply doesn't have enough legs to carry on for a long time. The concept is one that should be experienced for what it is, but a long involvement has little to offer. After just an hour of play, I was at a point where I simply felt no urge to go on. I got the point. What next? More of the same puzzles. 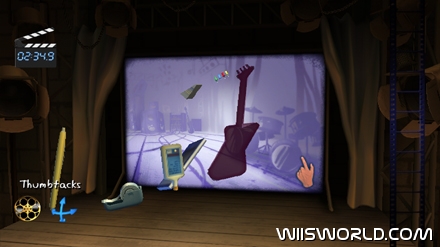 That being said, the game does have a decent amount of content. 100 puzzles in all, with the amount of time spent in each varying from one to six minutes. There's also a good variety of objects to be used and a level of excitement in seeing what objects will come next and how they'll be used. And while I got tired after an hour, that doesn't mean it wouldn't be enjoyable some other time. This is a game that doesn't scream marathon, but spread out over time someone could certainly absorb a good amount of enjoyment.

The visuals leave little to complain about. The game has a pretty look with 420p support and full widescreen. Objects have at least a good amount of polygon complexity and there has been definite effort put into making the game look good from a technical standpoint. 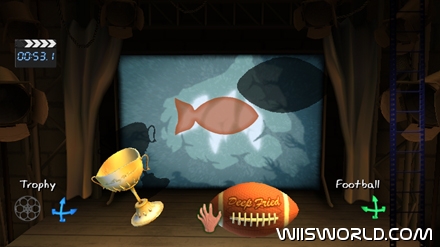 ShadowPlay's atmosphere is one of a slight vaudeville, early cinema era, which is cool to say the least. The objects are clean and colorful, a good bonus in the game's favor.

The only improvement that could have been made in the graphical area lies with the interface and menus. The default font used can be hard to read on smaller, standard-def televisions and the menu is a bit sloppy in its simplistic style. 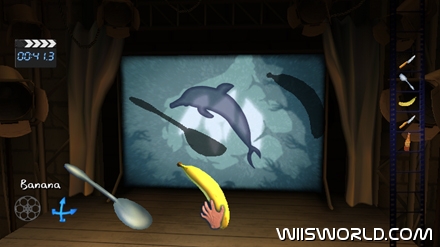 Perhaps the lowest aspect of ShadowPlay, the audio is barely even passable. The music, while fitting, I suppose, has a spastic level of quirkiness that gets rather old rather fast.

Sound effects aren't any better either, they show a lack of concern about them. Clicks, bumps, and bangs are simple and uninteresting. The sound effects used at the end of every puzzle are generic and often sound like they're being played out of a cone.

Sound isn't the most important thing in a puzzle game, but poor choices in both sound effects and music have made the overall experience that much less enjoyable. 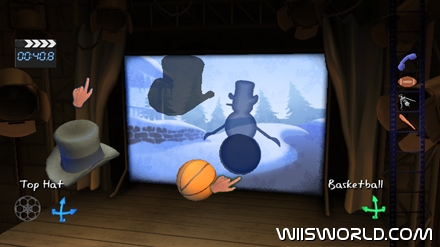 ShadowPlay's prominent weakness lays in the narrow scope of the puzzle gimmick. That's not to say the game is bad however, as a good amount of the package works, looks, and plays just as it's supposed to. The satisfaction you're likely to get out of a title like this is directly proportional to how fun you find mixing and matching geometric shapes and objects. Find yourself to be particularly skilled in such and ShadowPlay will be a fun, interesting experience with plenty to love. Don't find that kind of gameplay compelling or exciting? Then perhaps the 800 points are better spent elsewhere.

While it is good that a certain demographic can enjoy the game, what I consider an exceptional game is one that is able to strike at the interest and liking of a large group of people. ShadowPlay won't grab enough people's addictive tendencies as it will only be found addictive by a relatively low amount of players.

Great review. Is the hat zany?

Hi Nova, thanks for the review. One small correction- would you kindly correct the price? It's actually 800 points. Re-gift your hat.

I've fixed up that little error, thanks for pointing it out Brenda.