A journey through Hyrule... and the ages 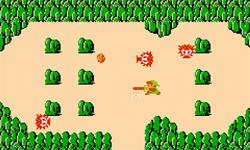 I somehow got the crazy idea that I wanted to beat all the Legend of Zelda games. I don't know why I even got myself so worked up about this, I am terrible at finishing games because I am easily distracted.

So, ignoring my common sense, I started to play the first The Legend of Zelda... and 30 minutes later I am already feeling utterly defeated. Not that it's a bad game, it's actually quite fun, I just can't deal with going back to the starting part ever time I die (which is more than I care to admit).

Part of me just wants to move on and begin with Ocarina of Time. I'm spoiled to the 3D worlds after all, but the other part of me thinks I would feel super accomplished and connected to the series if I played through all of them. Oh, the struggles of being a gamer. I will blog my progress through each game if I manage to keep this up!

Have any of you guys played through the entire series? Any advice?

Hey Kacy, I actually had the same problem when trying to go back to the older Zelda games. OoT was my first 'real' Zelda game too. So what did I do? I wasn't afraid to get a little help.

Zelda 1 for example is a lot more non-linear than any other game in the series. If you want to have a real chance of finishing, I'd suggest getting a map showing the locations of heart containers. Not only does this give you more life, but they are necessary for the better swords. Once I knew where extra rupees, hearts etc. were, the game became much more like the later Zelda titles.

Zelda 2, the adventure of Link is a different story. If you are not good at 2D action games, you'll die a lot. There's a reason why it is considered the 'Dark Horse' of the series.

The best 'past' Zelda game to start is probably 'A Link to The Past'. Though ALttP is not quite as expansive as OoT, gameplay, story, music and sense of exploration are extremely similar. There's a reason why many consider it a favorite SNES game. That, and it is nowhere near as hard as Zelda I. Plus, warp points like in OoT!

If you'd like any other info, feel free to ask.

I have to hold my hand up and admit the only Zelda game I've finished to date is "Four Swords" (single player version). I made it pretty far into several others, but for one reason or another got interrupted. My backlog grows ever longer.

I personally think Ocarina of Time is one of the worse Zelda games; a lot of the hype comes from those who played it when they were younger. I'd skip OoC, Majora, Adventure of Link, and Skyward Sword (DEFINITELY Skyward Sword). Everything else is fantastic, I'd start with either Link to the Past or Wind Waker. Good Luck!

I second Andrew's comment; a map is a must have! I remember the first time I played LoZ, my father and I bought a stack of paper an pencils and drew our own map as we played through. We would compare maps as we each explored in different directions (we would play on separate files), and we would seek out every heart we could find. Once we got that magic sword, the game became a breeze to finish... And then there was Second Quest.

If you still aren't sure about playing LoZ first, then why not try playing the games in Chronological order? The Hyrule Historia lays it out for you pretty well. Good Luck!

I played all of them up until Majora's Mask, which was fun but an ordeal. I have played others after Ocarina, but those first five were the ones I knew very well.

Ocarina of Time, as a person who didn't play the game properly until 2011, is my favorite game of all time. It was playing in this huge world that after transversing for hours upon hours, got to me emotionally. Now going back to that game is like going back to an old house you used to live in. I have many memories in that world and have played through the game countless times, I guess that's why I love that one so much.

The original Zelda is definitely my second favorite. It's that world with no restrictions, the way you can go into any dungeon you want at any time and travel the whole world without someone telling you where to go.

I would definitely advise playing through them all, those first five are absolutely fantastic... even, dare I say it, Zelda II.

Thanks guys! I know I have been away for months and just saw this but reading all of these helpful comments kinda of resparked my interest :) though...I haven't made much progress but I definitely plan to at least finally make it to the End of my modern Zelda games that have been left unfinished!