The last few years have seen a miraculous revival of the long thought dead platform genre. With Super Meat Boy, New Super Mario Bros. Wii, Kirby's Epic Yarn and Cave Story, the Wii has surprisingly proven to be the best place for these retro throwbacks. With Donkey Kong Country Returns, 2010 ends with yet another amazing 2D style platformer, possibly the best of the year.

Because the Kremling Crew of Crocodiles are property of the now Microsoft owned company Rareware, DK and Diddy face new enemies known as the Tiki Tak Tribe. Once again, Donkey Kong's banana hoard has been stolen, though the Tikis have an actual reason for stealing the bananas. The story is basic, but since when have platformers other than Cave Story needed good stories? 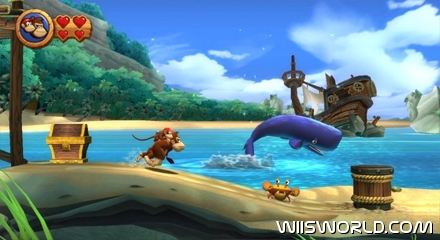 The last time most players visited Kong Country was in the third DKC for SNES in '96. For the most part, the overall game hasn't changed much, but there are enough subtle tweaks to improve the experience dramatically. Gameplay largely still consists of players scrolling left to right in order to get to the end of a stage. Jumping, rolling, vine swinging, climbing and dodging are all present, but surprisingly, there are no swimming sections whatsoever. The team-up move introduced in the Rareware titles is also absent, and rather than having players 'tag in' Diddy Kong like in the SNES titles, Diddy instead acts like a power-up. The smaller Kong rides on DK's back, enabling a rocket hover ability and a few extra hits, yet is only playable in a two player game and even then it only makes the game more difficult. Other than DK and Diddy, the only returning Kong is Cranky, who unfortunately has lost most of his funny/annoying personality. However, Cranky is far more useful than he was in the SNES titles as not only does he sell you extra lives and special items, but you need his special keys to open every stage in the game. In addition, most of DK's animal friends are absent, with the only returning one being Rambi the Rhino and technically Squawks the parrot, though Squawks only points out hidden items, nothing else.

New to the series are several additional moves for DK. The walls are frequently covered with growth that can be climbed, usually on the ceiling in fun to traverse sections. Retro also has given DK a ground pound maneuver taken straight from Smash Bros. and also the ability to blow a jet of air out of his mouth. The motion required for both moves and DK's rolls both require shaking the Wii remote. While these moves thankfully aren't necessary for most of the main game, you'll need them to uncover every secret and they soon become slightly irritating and repetitive.

What makes and breaks games like this is the level design, and for the most part, it's stellar. While most of the themes for the worlds are taken directly from the first DKC (Jungle, Forest, Factory, Caves, etc.), nearly every level has a different 'hook' to distinguish it from the others. Retro wisely takes advantage of the rarely used foreground in 2D games to create dynamic set pieces; in one level you might be outrunning an ever encroaching swarm of deadly bugs. In another, an Octopus will attempt to swat you with its tentacles for the entire level. Racing through an erupting volcano, dodging a giant bat while riding a rocket powered barrel and traversing prehistoric tar pits are just some of the awesome adventures you'll have while on DK island. Nearly every level has something dynamic occurring in it, resulting in one of the first games that feels alive. 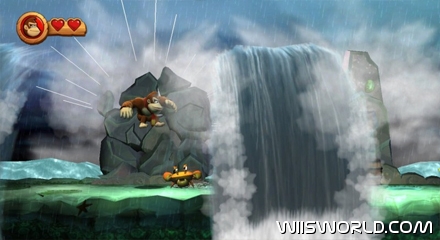 However, it must be said that this game does not seem intended for a casual audience, period. DKC Returns is incredibly difficult, matched possibly by only Super Meat Boy for most difficult platform game of this generation. Players will lose dozens, if not hundreds of lives on certain stages, especially the numerous mine cart and rocket barrel sections, not to mention the very difficult secret stages. Like in New Super Mario Bros. Wii, a Super Guide has been included that will play the game for the player if they so choose after losing eight lives. Though this reviewer personally never used the Super Guide, it's not shameful to need it and the impression is that it was included to give players a break, not make them feel less skilled. However, the levels themselves flow extremely well, you always want to see what comes next.

The sound effects are largely lifted straight from the SNES games, likewise the music. Nearly every musical track in the game is simply a remixed version of one from the original DKC, though that's not necessarily a bad thing. There are a few new tracks, but only the Tiki Tak Tribe's main theme impresses, and even then it can't compare to the still incredible soundtrack by David Wise and Grant Kirkhope. Adding instruments to the tracks makes them sound even richer and the game is better for it. It would have been nice if Retro had taken tracks from some of the other DKC games to pad out sections in which tracks are repeated, but that will likely have to wait until the next title.

DKC Returns will last most decent platform players about six to ten hours depending on their skill level. However, even after finishing the game, there is still much more to do. Each level contains two sets of collectibles, each unlocking something different. If a player collects the letters 'K-O-N-G' on each level, new secret temple stages unlock on every world. These are actually more difficult than the main stages, and at the end of each stage is a giant pearl. Collect all eight and the special 'Golden Temple' stage is unlocked. 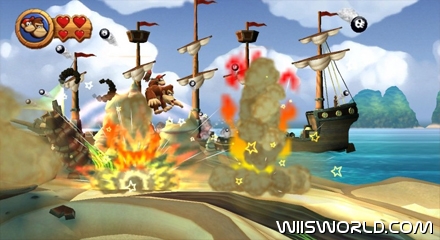 Also, each level contains a number of puzzle pieces which are very well hidden. Collecting a complete set of puzzle pieces unlocks additional content from the developers including art, dioramas, storyboards and more. Also, players have the option of replaying stages in a Time Trial mode. Players can race to the end in order to try and beat the game's best time and obtain the coveted golden medals. Only the best speed runners will be able to obtain these prizes.

As if these weren't enough, there is one additional piece of content that effectively doubles the game. When finishing the Golden Temple stage, players are awarded the golden mirror, which enables Mirror Mode. Not only does this change each stage in the game to left scrolling rather than right, but it also eliminates Diddy Kong entirely, eliminates the inventory entirely and only allows DK one hit before death. Effectively, it's the game's hard mode.

After more than eleven years, DK has returned in splendid fashion and Retro Studios has proven that they have the magic touch when it comes to reviving Nintendo franchises. Whether their next game will be a Diddy's Kong Quest style sequel or something else entirely, let's all hope that Retro's next game comes sooner rather than later.

Retro can do no wrong.

I would definitely give Retro an A+ for making a phenomenal side-scrolling platformer for the Wii - a game that's possibly even more fun than NSMB, topping the list as one of the Wii's best overall. I'd even give Retro an A+ for their attention to detail in restoring a franchise last seen 14 years ago and actually making it feel pretty authentic. I don't think that we could have expected any better. The music, the graphics, and the gameplay are all top-notch. However, if I were to take Retro and the gap in time out of the equation, I'd probably only give DKCR a B+ because it lacks several elements that made the originals so fun. For example, Donkey and Diddy can no longer swim, the duo can no longer throw each other, roll moves require much more thought and effort, and I'm only into the third world, but I still haven't seen any rope vines to swing on. Furthermore, the inclusion of animal buddies and transformations, a trademark of the SNES versions, seems to be an afterthought at best. The enemies are fine - the frogs and crabs and various other bad guys look pretty cool, and I don't hold it against Retro for adding new ones; after all, Rare always added new baddies to each installment in the classic series, anyone remember the cat-o-nine-tails? However, I am disappointed that none of the Rare baddies were allowed back into the game. Even just a few buzzing bees, altered to avoid copyright infringement, would have made me smile. Those bees were the cause of hours of trial and error, yet they haven't been replaced by a comparable foe in DKCR. And I can't imagine that a few newly designed crocodiles, paying tribute to the Kremlings, would have caused any major lawsuits. If Cranky Kong, an indisputable Rare creation, was allowed into the game, then I have no idea why Retro didn't try to get the rights to a few of Rare's baddies. I'm not saying that we needed to see King. K. Rool again (though I wouldn't have minded), but the new game seems to lose a bit of its old feel without any of Rare's enemy creativity. Beyond the enemies, I have a very minor gripe about the characters included in the newest installment. Multiplayer is great, but Retro could have included Dixie and Kiddy Kong to allow for 4-player support, ala NSMB. I understand that DK and Diddy were the classic duo, and perhaps the others will return in future installments, but the inclusion of all four characters for multiplayer use seems like common sense. Others of the Kong gang were excluded as well. I'll allow Wrinkly Kong's omission, after all, Rare did kill her off in DK64. And Swanky did distract from gameplay sometimes, so his vacation isn't as troublesome. But Funky, a staple since 1994, would have been an easy character to add for the same old job - world hopping. Don't get me wrong, Donkey Kong Country Returns is an amazing platformer on the Wii; it's perhaps my favorite Wii title to date, and it more directly mirrors the original saga than I ever would have hoped, especially given the change to Retro and the lengthy span of time. It is amazing in all that it does and I should count myself blessed. But I do think that if Rare and Nintendo hadn't fallen out, that perhaps there'd be Zinger or even an old Klaptrap hidden somewhere in a few levels, ready to take a few more beatings.

Only got NSMB-Wii a few weeks back and goldeneye and black-ops this will be for christmas or next year at my yard.

Oblivion709: Donkey Kong Country Returns, can basically be described as more of Nintendo's pure quality. If you've ever... read more