Klonoa hey. It's available in stores near you at a price that seems attractive. Is it all it's cracked up to be?

In some respects Klonoa feels like a throwback to the 16-bit age, you don't get many of these linear platform games any more. The environments are in 3D, but the movement plane is 2D, so the world sort of wraps itself around as you walk along your merry way. This can be a little disorientating at first, not being sure if things are platforms or merely part of the background scenery. Visually the game is great though, characters and levels are colorful and sharp looking and the whole thing has a feel-good vibe going on. 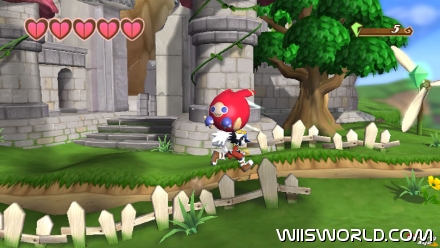 The gameplay mechanics are very simple. Klonoa, the main character, only has a couple of basic moves at his disposal. He can jump, and he can grab enemies. That's really it. With an enemy in hand, you can either throw it or perform a double-jump. Throwing enemies can be used either to kill others, collect items or hit switches. While you can only walk left or right, you can perform throws toward the background or foreground. This is used in many of the puzzles you encounter and adds some.. depth to the play.

The developers couldn't have been any more generous with the control schemes supported. Short of the Balance Board (which would be ridiculous), they're all in there - Wiimote alone, Nunchuk+Wiimote, Classic Controller and GameCube pad. I found myself using the Nunchuk combo, but the others work equally as well.

Right off the bat, the storyline made me feel it was probably aimed at a younger audience. It's a lot like something out of a Sonic the Hedgehog game. Klonoa doesn't speak much himself, except to enthusiastically shout generic phrases like "alright!" and "wahoo!". Most of the dialog is spoken by his blue accomplice Hewpoe and other characters that crop up in the cut-scenes throughout. These scenes can easily be skipped over if you're not in the mood for them. While I wouldn't say the general story is engaging, the ending is much better and actually worth watching. 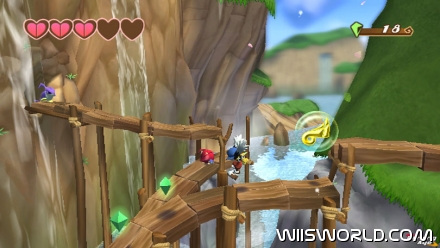 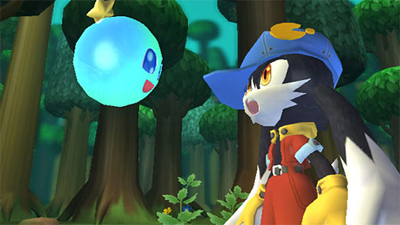 If you're an experienced gamer of any description, Klonoa is on the short side and definitely doesn't outstay its welcome. Even on the first run through you'll probably clear it in around 5 hours of play, maybe even less. Some of the platforming action in the later stages is a little tricky, but nothing that you can't pass after an attempt or two. The game makes use of lives, where if you lose them all you'll have to start from your previous save state. The save system is fair, you get to use it at the end of every level.

While Klonoa is undoubtedly a breeze, for the most part I found it an enjoyable breeze. Both the platforming sections and the boss battles are fun to take part in. Considering it's been released at a budget price, you can't be too harsh on its short length. Overall a thumbs up in my opinion, and kids would likely get even more out of it.

I thought this was a very good game. True it was a tad too short, but some of it's other mechanics, like switching costumes and extra visions make up for it.

I can kind of understand how short games can be enjoyable as long as the gameplay is fun. SMRPG was probably the easiest RPG game I've ever played but I liked it. However I still prefer if games have challenge, something to do after you've beaten the game or will give it a long life span.