Manifest Destiny at it's finest.

At first glance, one might think that Little King's Story is a game intended for the preschooler crowd, visually similar to everything from Raggedy Ann to Fisher Price toys. On playing the game however, it becomes clear that LKS is not intended for little children, and has a surprisingly steep learning curve. This is a game intended for core players and is the closest thing in years to a new Pikmin title.

The overall premise of LKS is similar to 'Where the Wild Things Are' with your character, a little boy named Corobo, accidentally stumbling into a forest and becoming the ruler of the kingdom of Alpoko. Spurred on by the Don Quixote inspired Bull Knight Howser, the player's overall goal is not to save the world, but to conquer it and the seven kingdoms surrounding it. Though the overall plot isn't touched on very much, it makes a surprising change from games casting the player as a virtuous paragon. These kingdoms don't attack the player, so essentially the king is undergoing a crude form of manifest destiny. The player is aided by three 'ministers', each of whom helps in different ways. The game feels somewhat like an anime as each kingdom feels uniquely different in tone and execution, so players will always look forward to what is on the horizon. The one gripe this reviewer has about the overall plot is that the game's ending is not only ambiguous, but is reminiscent of an M. Knight Shamalyan style plot twist. 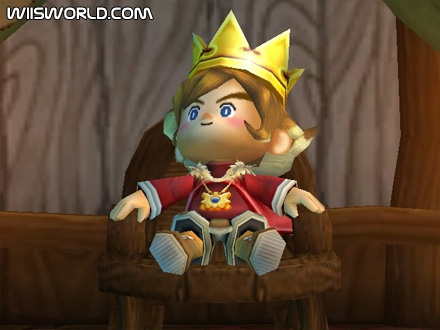 The gameplay of Little King's Story, as stated earlier, is very similar to Nintendo's Pikmin series and the Overlord titles from Codemasters. The king himself only has the ability to command and aim his subjects. There are twenty different job types to do, with almost all being necessary to finish the game. For example, it is necessary to have a miner to clear away enormous rocks, a woodsman to take apart hollowed out tree stumps and Sautee chefs to instantly kill giant chickens. However, players will mostly stick to only a certain few character types, as the attackers, money gatherers and carpenters are the only job types who are used more than a handful of times. It is a little strange that certain job functions couldn't be given to these same few classes, but admittedly it wouldn't make much sense for a farmer to wield a frying pan or a knight to use magic.

The only real resource management in LKS involves your subjects and and the local currency called Bol. It is possible for players to tax their subjects, but SimCity this is not. Most Bol is gained by going out into the world and either killing enemies or digging up holes to find treasure which can be used to build up new areas of the kingdom, upgrade the weapons and armor of your troops and gain more citizens in case your characters die and do not wash up alive on the nearby beach. Taking a cue from Pikmin 2, there is no time limit, but it is recommended that players go back to their castles as night approaches even if doing so isn't always necessary. As for the king's subjects, players start out with the ability to recruit only five characters and can eventually recruit up to thirty. Like in Pikmin, players simply point towards an object of interest and 'throw' their subjects towards an object of interest to initiate an action. That's the game at it's most basic, but there are refinements made over Pikmin on Gamecube which make LKS feel more polished. Things like being able to change the position of your troops, the ability to individually assign subjects special items and the side-quest giving Suggestion Box all help give the game an identity all its own.

In addition, LKS has some of the best boss fights of any game in years. While the first two bosses are fairly standard, things elevate quickly. The Ripe Kingdom's fight for example, involves knocking the king around a life size pinball machine. Later 'fights' include a quiz show reminiscent of Banjo-Kazooie's endgame, a constantly changing television inspired landscape and an endurance race to the top of a mountain top. Each boss is memorable and unique and with every victory the player gains both a huge amount of treasure and a new princess. Yes the player king 'practices polygamy' despite not going beyond kisses. Each of these encounters with the kings and princesses will remain long after the game is finished. 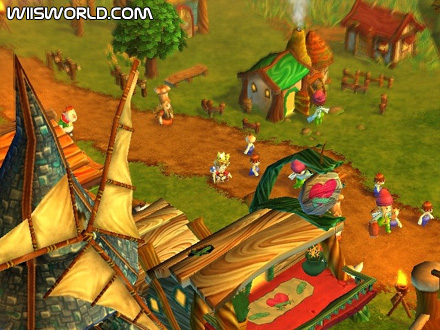 Truthfully, the graphics of LKS are nothing to write home about, but they fit the game's 'childhood innocence' theme very well. Each area is bright and distinct and the art style really shines. Each area and their kings are visually distinct even if they are slightly generic. Unlike Pikmin, there's virtually no slowdown whatsoever and everything flows together very well. LKS doesn't have Pikmin's sense of larger than life wonder unfortunately, but a world in which cows, dragons and UFO's exist all at once is worth visiting at least once.

In terms of sound, LKS is a bit of a strange experience. The game's music is made almost entirely out of public domain classical music, from 'Pomp and Circumstance' at the title screen to 'Night on Bald Mountain' at the game's final battle. Admittedly, this does fit the European medieval theme the game goes with, but the opening title theme song is good enough that it makes one wonder why there isn't more original music. Most of the sound effects are good and make the game feel very alive... with the possible exception of a squeak noise made when the king walks anywhere. While this noise can be muted by your other subjects, the music and the options menu, it is the sort of noise that makes one wish to cut off their own ears upon prolonged exposure. With the exception of the opening movie, most of the 'voices' are Rayman style gibberish though these voices are performed well and fit their characters.

Unfortunately, despite being a great Wii-only title, Little King's Story does have more than a few flaws. The first being that the game has a very steep initial learning curve. Players won't understand exactly how the game works at first and it takes more than a fair few hours to gain some solid grounding. The second is a similar issue, namely that the game's tutorials are not very good. The king's Anything Minister Liam does explain the concept of certain things like how death is handled and what the various jobs do, but unfortunately he isn't very forthcoming on details or how these concepts are applied. These tutorials could have been much better made than they were, even if the game didn't have a very large budget. Finally, it is surprising that LKS does not take advantage of the Wii's motion controls like Nintendo themselves did in their re-release of Pikmin. There are many places in LKS that are frustrating not because of the player, but because the straight aiming feature can only target so much and at a certain distance. Considering that LKS came out in 2009, it seems to be an enormous oversight. 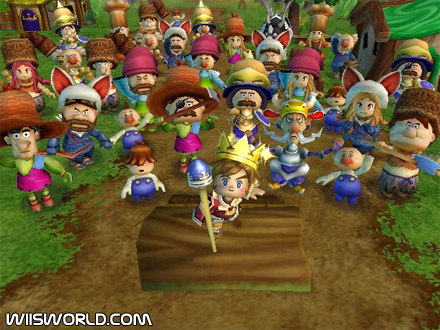 Little King's Story is a fairly deep game, and will likely last players twenty hours minimum in their quest for world domination... err unification. Side Quests to gain more treasure and land to expand the player's kingdom are all but mandatory, and it might be necessary to spend many days simply treasure hunting while waiting for a new lead to another kingdom. Thankfully, the game has some good design choices, with warp and save features being easy to use despite the game not having an autosave. Players can teleport straight back to the castle as long as they are not in a hostile area, and can save at any time, so it can be easy to go as little as just twenty minutes to as long as several hours.

While Little King's Story may have its share of flaws, the game more than makes up for them with its depth, variety and addicting gameplay. It is the type of game a player can start and intend to spend only a little bit of time with and can end up with them easily spending an entire day with it. If you've ever dreamed of conquering the world with Beethoven's 9th blaring in the background, Little King's Story is definitely a game that you should seek out.

Hey everyone, I know this is YEARS after the review, but I have to make a correction. The opening sequence music isn't original like I thought. Instead, it's another classical piece called Bolero. A great piece, but sadly not original.

To Little King's story I mean.