From the Light to the Darkness.

Lost in Shadow, or A Shadow's Tale for those who aren't Yanks, is the sort of game that should normally be celebrated. With a genuinely unique concept in a 2D style, one would think that the game would be amazing in a sea of sequels and copycats. Unfortunately, a game cannot succeed on its concept alone and Lost in Shadow can be used as genuine proof of this statement.

There is very little story in Lost in Shadow, and the title ascribes to this minimalist concept throughout. The game starts with a trapped boy having his shadow cut off by someone, and the shadow is thrown to the very bottom of a massive tower. Why they were thrown, the person behind the deed and the mysterious monster players meet several floors up are all revealed in time. There is little story explanation through text and images, but the minimalist approach in this sense works well and heightens the atmosphere that the developers were trying to convey. The story takes a spiritual approach rarely seen in any entertainment medium, and it's good... there just should have been more of it. 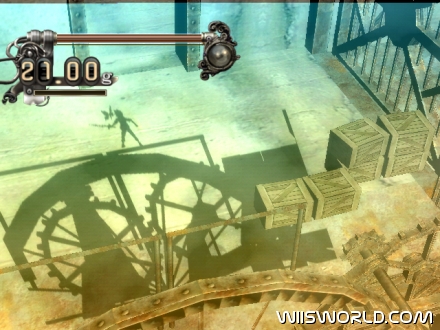 The basic concept is that you are a shadow, traversing a world of shadows. What this means is that the player travels a 2D landscape comprised of shadows cast by solid objects close by and those shadows are solid to the player. A fence gate with a pointed top to discourage intruders becomes a spiked pit with the shadow cast. Eventually, this concept is expanded with the ability to manipulate certain environmental objects, all ultimately affecting the world of shadows and initially creating an enormously innovative and fun experience. Nearly every stage consists of finding three keys to dispel the shadow barrier at the end of the stage. Without this goal the game would be far too simple and easy, so what would seem like a tedious mechanic can be accepted for the sake of gameplay and challenge.

Unfortunately, the fun doesn't last very long. After the first twenty stages or so, the basic puzzles the game has been giving the player start to repeat, over and over. Keys notwithstanding, the game becomes tedious and boring as a lack of variety in the puzzles and game mechanics really hurts things. Eventually there is a new gameplay mechanic introduced, but it happens so close to the game's end that it minimizes this mechanic's impact. The later stages feel less like fun and wonder than they do like a chore. While the bonus stages called 'Shadow Corridors' help break up the stages, they too soon suffer from tedium and repetition.

The game also has a combat system in which the shadow fights monsters, big and small. Unfortunately, the combat is also fairly shallow and disappointing. Combat mainly consists of getting close enough to use the shadow's sword on whatever enemy you need to get rid of and swinging away, occasionally jumping or running back to dodge. The combat is simplistic and slightly slippery, rarely being fun. Combat is necessary though, as the stages frequently have combat challenges that will be nearly impossible without previous combat experience. Yes, the game has an experience point system similar to that in an RPG given for every enemy killed and every finished shadow corridor. With each level gained, the player becomes stronger, so leveling is almost necessary if one wants to defeat the more difficult enemies. Though there are a few fun moments where the player is forced to use environmental objects to fight with, these are unfortunately few and far between. 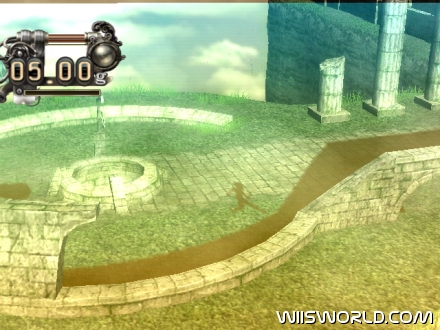 One of the things that Lost in Shadow does incredibly well is atmosphere. The game feels like the 2D equivalent of ICO or Shadow of the Colossus' deserted landscapes and castles. There's almost no music whatsoever, with the sound provided by enemy noises and effects of the surrounding world. Unfortunately, a lack of overall variety in the landscapes hurts the game, as some areas are repeated entirely instead of giving way to new ideas.

Once one reaches the tower's top and gets the necessary items needed to finish, there's little incentive to do anything else in Lost in Shadow. The player does have the option to find all of the lost shadow memories (which both add to the completion score and the player's health bar), but finding all of them does not give a special ending or anything similar, just a new weapon. At this point such a thing wouldn't be needed, so it's essentially useless. Though players can play the game on higher difficulties, there's little reason to play through further. Most players will take only around eight hours to finish.

Lost in Shadow is the sort of game that should be celebrated for having an innovative and interesting hook. Unfortunately, a good mechanic does not equate good game design and the experience suffers as a result.

Arindam: Videogame is a synthesis of two words - 'video' and 'game'. Since the advent of CDs, many developers have... read more