Nice shootin', try another one.

Mad Dog McCree: Gunslinger Pack, published by Majesco, is billed as the first full motion video (FMV) shooter on Wii. Anyone who visited arcades or had the dubious pleasure of owning a Philips CDi machine back in the early 90s might remember when the Mad Dog first made an appearance. The Wii version is more or less a direct port of that game, or those three games to be exact, the following collection is bundled onto one disc:

Three games may seem like a bargain, but they're extremely short. There's little distinction between any of them either, for all intents and purposes it's the same experience across the board. Set in the wild west, you work your way through a series of live action scenes, shooting bad guys and sparing the innocent folk. At the end of each segment you're typically treated to a stunt, e.g. a cowboy tumbling off a roof. In terms of the cast, we're not talking A-listers here. The majority of the acting is awfully done - but on the bright side, in parts it's so over the top you might get a cheap laugh. The undertaker from the first two games is pretty cool though, he's like Ted from Scrubs.

That said, the third game "The Last Bounty Hunter" is probably the best of the trio. In it, you play a bounty hunter tasked with tracking down four outlaws. In the final confrontation with the villains, you can choose to bring them in dead, or alive by shooting a weapon out of their hand. The alive option nets you more cash, and subsequently a higher score. 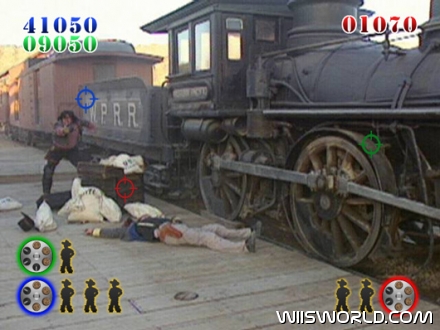 The nature of MDM means that there's a lot of cut-scenes. These aren't always seamlessly integrated with the gaming though, and the action suffers slow down and frame skips. Action taking place on-screen is often hilariously unrealistic, something is amiss when you shoot a guy and he catapults 10 feet in the air towards you. The shooting mechanic itself takes some getting used to as well. You can fire shots in rapid succession, but frustratingly only your first bullet will count - the rest will be ignored. Combine this with some horrific collision detection and you're in for a lot of stop-and-start gameplay, because you die after a single hit or killing one civilian.

rady ruck got no rove for me.

Luckily, you don't have to start over at any point, the game offers an unlimited number of continues and you can jump right back into the same section you died in. Each section is quite short too, around 5-10 bad guys long, allowing for rapid progress to be made. In fact you can beat each game in around half an hour. There are harder difficulty settings to try, but forgive me if I haven't. 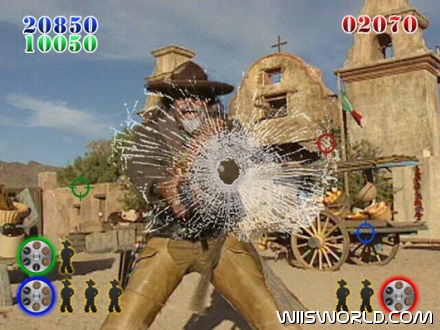 As you'd expect, the Wii remote is your only control option. You fire using either of the A or B buttons. Reloading your pistol is a simple case of aiming off-screen and pressing. As is usually the case with these shooters, you can also use the Wii Zapper peripheral if you want to. I'm not really a fan of the cumbersome zapper so I went without.

Aside from the things already mentioned, Mad Dog McCree's fundamental problem is that it's not much fun. It doesn't have a great deal of atmosphere going on. Your own gunshots sound off from the little speaker in the remote, a novel idea, but they're too weak and muffled and so don't have enough impact. The western-style music could be seen as a highlight, but it's used too sparsely to have a big effect.

You can see why they thought porting this game would be a good idea, the Wiimote controls do make aiming significantly easier than in previous console iterations, but at its core, Mad Dog McCree is an interesting idea executed quite badly. It hasn't stood the test of time very well at all (not that it was great in the first place) and considering the Wii isn't short of these light-gun style games it's a hard one to recommend. For my money, something like The House of the Dead: Overkill, a game you can laugh with rather than at, is a much better buy. Perhaps one for nostalgics only.

I remember when this game came out cause I bought it for my panasonic 3-do and I still have it. It is definitely a novelty game and just meant to be fun not to taken as a serious game. This is a horrible review on such a classic game.

I used to have it on the Philips CDi, it's long gone now though. I don't think you'll find many reviews singing this game's praises btw :)