Bring back the challenge.

The Mario franchise. Nintendo's prize horse. It's gone through countless recreations and new directions. From 2D to 3D to racing, golf, and tennis spin-offs, well you get the idea. When the average person thinks 'video games', Super Mario is at the forefront of those thoughts. New Super Mario Bros Wii is the latest in the behemoth series, and more than anything it returns to the original formula.

Colorful, exhilarating, and above all else, ineffably difficult, New Super Mario Bros Wii is a homage to the old while at the same time inviting to the new. As advertised, the major feature of this version is the multiplayer. I was able to play with two other friends, both to and against the benefit of myself. As for the challenge of the game, the experience was often hair-pullingly frustrating in its difficulty. Nothing new to Mario games, of course, but the multiplayer will add a foreign element of challenge to long time Mario players. 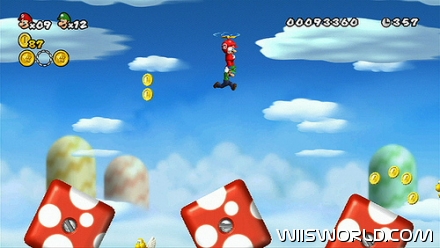 Nintendo has a unique talent for making games for its own consoles. Its products have a distinct shimmer and polish (despite their relatively simple mechanics and style) and NSMBW is certainly swimming in its own sheen. Despite what many people may say, Nintendo puts a great deal of effort into making their games, and everything about NSMBW is case evidence to that.

Who hasn't in their lifetime played a 2D Mario game? You'd be hard pressed to find someone who hasn't played at least one, and it would be just near impossible when you add the 3D iterations as well. With that in mind, NSMBW is pretty much what you'd come to expect. Nevertheless, the game does have new kinds of challenges with which the basic formula puts the player through. There are all kinds of new enemies and obstacles to keep the player on his/her feet. Of course, there is an abundance of similarities to older 2D Mario games, and just about anyone who ever held a controller will be instantly welcomed by recognizable controls and an ageless formula. 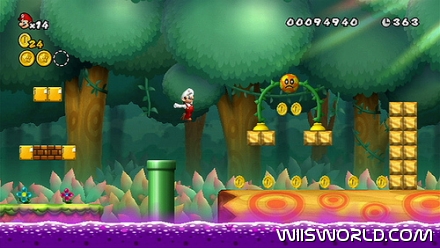 Multiplayer is a beast of its own. Nintendo's recently bred group-gaming mentality is fully realized in this title as up to four players can come together and play simultaneously. At least it would be simultaneous if the players didn't have as much effect on each other. Players will bounce off each other, shove each other around, and if the players are devious enough, pick up each other and throw each other around. The more people, my friends and I found, the more difficult. But I would be lying if I said there weren't definite benefits to playing with multiple people. Dying now means that you can get resurrected (assuming you have enough lives) and don't need to start the level at the beginning or last checkpoint. Bubbles are a new mechanic that come with multiplayer as well, which can be both a blessing and a curse as the player can save him/herself by turning into a bubble but also putting everyone else in danger as someone in a bubble puts everyone else at a higher risk of having to start the level over. You see, if everyone turns to a bubble or dies (or a combination of the two), it's the same as if the player dies in a single player Mario game, since someone in a bubble can't get out without being touched my another player. So abusing the bubble system will probably make a player disliked by his fellow players (as I experienced in my fatal amateurishness).

Sometimes it's unbearably difficult, which will certainly turn off some of the more casual gamers, but the hardcore will have a field day basking in completing the game with as few continues as possible. 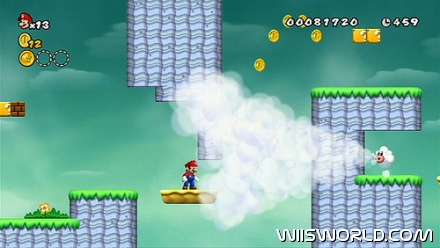 Eight worlds await the brave knights who dare take the challenge, and depending on how good they are at platformers and particularly 2D Mario platformers, the amount of time needed to complete the entire experience varies. My friends and I spent hours upon hours just to get halfway through, and even more when the difficulty ramped up near the end. Completionists will spend a good amount of time finding the game's secrets and items, such as special coins, three of which can be found on each level.

Eight worlds is pretty typical for a Mario game and thus players will probably feel like the time spent is absolutely adequate for the experience. Granted, I did feel a bit surprised when we came to the end, as I never really steamrolled though a Mario game as I did with this. But I digress. There's plenty of variety in style, mechanics, and experiences to be had, just like you'd expect from a company who has been using this formula for almost thirty years. 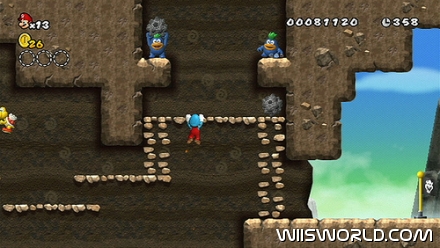 Nintendo always does well in implementing polish. Of course there's full widescreen and 480p support, and my impressions of the look were generally very positive. Larger objects looked clean and fluid, and there was a decent use of lighting effects with the 3D objects. Little to complain about here. Nintendo continues with its usual quality and style.

However, there are a few aspects I wasn't too fond of. Several animations and sequences, such as Bowser Jr. leaping into his airship after each of the boss fights (except for a scarce few in which the ship leaves without him) are exactly the same. Not a huge problem, but worth pointing out. Also, with 3D models on a 2D landscape the perspective can feel strange at times, and sometimes I almost wished they had stuck with all 2D. Again, not a huge issue, and one you probably won't even notice. 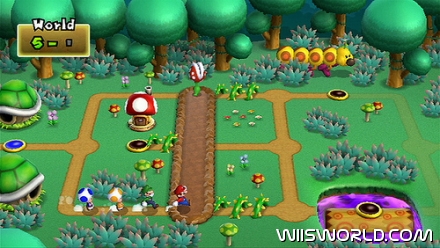 New Super Mario Bros Wii has the usual tuneful renditions. Music is up to speed with the rest of the games in the series, but I didn't feel there was any key piece that people will be able to associate with this one specifically. Looking back, just about every Mario game had at least one track that was memorable, from the more experimental tunes of Super Mario Land, to the quirky, inventive music from Super Mario 64, but I honestly can't think of anything worth a similar mention in this. Granted, our attention wasn't ever on the aesthetic value, but I always felt like there was something catchy, and I found little of that here.

That being said, the music wasn't bad, it just wasn't spectacular. Sound effects on the other hand were above par. The game almost felt alive with its effects that so adequately played at the right moments. The boings, the bongs, everything helped make the experience a lively one. They even brought back the old sounds for Yoshi, which was a definite bonus for all Super Mario World veterans. 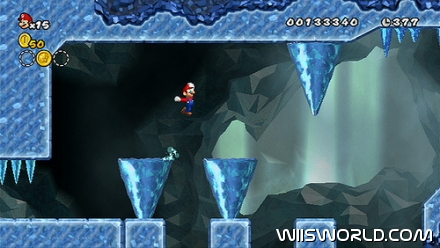 While an outstanding member of the Mario fleet, New Super Mario Bros Wii is not the flagship title, and Nintendo certainly doesn't treat it like that. It's precisely what you'd expect from a 2D side-scrolling Mario game, so your enjoyment of this game is directly proportional to how much you've liked such games in the past. Nintendo changes up the pace with the multiplayer (which does inspire an interesting twist in the traditional formula) but the formula otherwise remains the same from previous titles.

Nevertheless, NSMBW is a challenge to behold. It fits into a weird place as it's a bit too colorful and 'kiddy' in style for the more hardcore but significantly too difficult for the average casual player. My advice would then be for the hardcore gamers to get over the fact that the game gives off such an odor and let it invite you into its magnitude, as defeating the beast will leave you with a high sense of self-accomplishment. A must have for Nintendo fans craving difficulty, New Super Mario Bros Wii will most assuredly see high success just about everywhere. Are you going to be a part of that?

I truly enjoyed NSMBWii and can't see any reason why someone who already likes 2-d Mario games won't.

You know, I liked the game, but I wasn't too impressed by it. Maybe it's because I've been playing Mario games since Mario 1 (or, well, at least that's when I unwrapped my first NES all those years ago), but I found it incredibly easy to blow through. Although, the ending boss battle is fun. I thought it could have easily been a downloadable title, and I think on other systems (360, PS3) it would have been. It was fun, but really, really short.

There's actually a world 9. After collecting all the star coins in a world, you will be rewarded with a level in world 9. Good review.

I'm sure the reviewer knew this, he just didn't want to give away the world.

It is the best game ever.

You expect a story from a MARIO game? Okay.

It's a great game, but it's definitely too short. I blew through it surprisingly quickly, even though the game was pretty darn challenging at times. Still, it was a enjoyable time from start to oh-too-quick-to-arrive finish.

I never played Mario before, so I found it quite difficult! Plus, I'm over 50, which puts me at a disadvantage. I have opened world 9, but need one coin in 4 worlds. I will have to get help.

This is my personal favourite Mario game ever released! I love playing this game, but it camp be hard! Especially when playing with 2-4 players LOL

Can't... Sorry, I was typing too fast and I wasn't paying so much attention xD