One man's trash is another's treasure.

With Pikmin 3 very soon to release on Wii U, it seemed as good a time as any to look back on the original titles. Specifically, this is the re-released Wii version of Pikmin 2; despite the only real change being the new Wii controls, Pikmin 2 holds up incredibly well for a game released nearly a decade ago.

The original Pikmin had space captain Olimar crash landing on a strange planet with unusual flora and fauna. With the help of creatures that Olimar calls Pikmin, he was able to recover the scattered pieces of his ship and return home. Unfortunately, when Olimar gets back his workplace is in a massive amount of debt. The only way to pay it off quickly? Go back to the unusual planet and find valuable 'treasures' to sell. So Olimar enlists the help of the Pikmin once again, and a massive treasure hunt ensues. 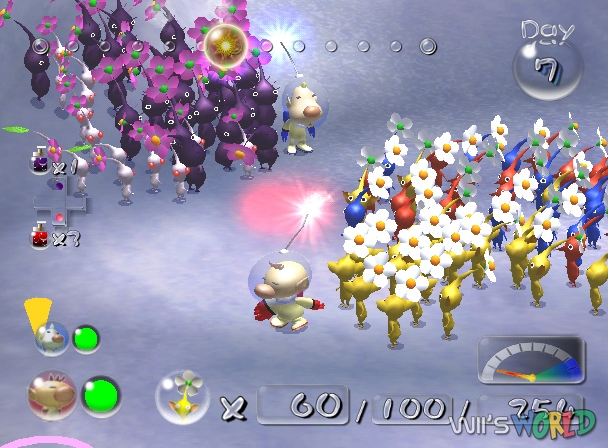 For the most part, Pikmin 2 is almost identical to the original in terms of its base mechanics. Once again, players grow and direct up to 100 little Pikmin, which quickly set to work on whatever needs doing. Most of the time the player will use their little buddies to attack enemies and carry large objects, but they can also build bridges, bring down walls and weigh down heavy objects. In addition, each color of Pikmin has its own distinct ability; the red Pikmin for example are impervious to fire, while the yellow have no trouble with electricity. Two new Pikmin types were added to Pikmin 2; Purple Pikmin are physically stronger yet slower than all others and white Pikmin can both cause and go through Poison. Interestingly, nearly all of the Pikmin types have a second, passive advantage. The reds for example are the fiercest fighters, while the yellow types can reach much higher ground than others. Unfortunately, the only distinguishing feature of the blue Pikmin is that they have no trouble with water and have no special ability otherwise. This 'action-strategy' hybrid would go on to inspire both the Overlord series and Little King's Story, but has surprisingly not been used in other games, which is a shame because it happens to be very fun.

The original Pikmin felt like a race against time for survival, in part due to the 30 day limit given to the player before Olimar's limited life support gave out. Pikmin 2 took player complaints about this limit into account and gives the player an unlimited number of days, but still only gives the player a certain amount of time per that day. In order to offset the lack of a time limit, the developers massively extended Pikmin 2 by incorporating new underground caverns. There are at least two of these caverns per area and they are similar to RPG dungeons. Each cavern features multiple floors filled with enemies, obstacles and traps peppered with the occasional boss fight. Coupled with the fact that when the player's Pikmin die, they die for good, Pikmin 2 is one of the hardest Nintendo games made. That doesn't mean the game is deliberately punishing though, and there's an incredibly satisfying feeling from finishing off a particularly hard boss or area.

Considering it was made in 2004 and was given no significant touch up, Pikmin 2's graphics are simply sub-par by today's high standards. The game's style is much more interesting however. Olimar, Louie and the Pikmin have their adventures on what is apparently an abandoned Earth, and are individually the size of a quarter. It's fascinating seeing things we would consider trash (like bottlecaps, strawberries and fake diamonds) considered holy treasures by someone like Olimar. The game also is helped by the creative flora and fauna which include the mushroom-like Bulborbs and half-snake, half-egret Snagret to name just a few. In most games, an attempt at a unique style can be a bad thing and take away from the gameplay, but Pikmin 2 is one of the few where the game's style is as important as its substance. 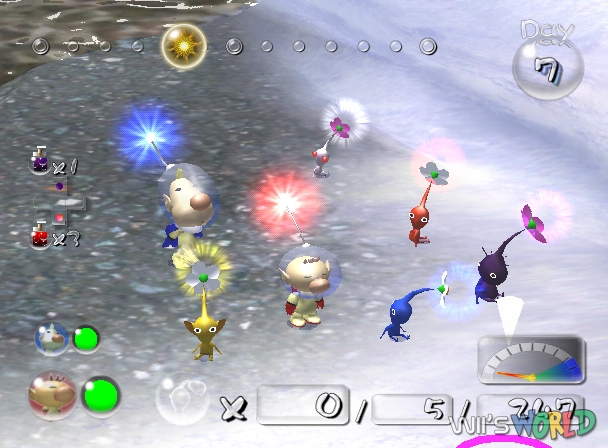 If you remember the sound effects from the original Pikmin, you'll know what to expect in Pikmin 2. From the almost annoying whistle which calls back your Pikmin, to the genuinely heart wrenching wails of Pikmin when they die. While the original Pikmin had more than a few catchy pieces of music, Pikmin 2 cannot say the same. The pieces seem muted, and while the music isn't bad, it isn't great either save for the boss fights.

Pikmin 2 is a surprisingly lengthy game, and will likely take 20 to 30 hours in order to complete the story mode. Admittedly, one doesn't need to gather all of the game's 201 treasures to 'beat' it, but simply erasing all of the company debt leaves an ending that lets the player know things are unfinished. The game also features a two player competitive mode similar to capture the flag, which involves both players trying to gather four marbles before the other, using items like cherries to help themselves and hinder opponents. It can be fun but is somewhat limited.

In addition, one particular treasure unlocks the game's challenge mode. In this mode, one to two players are given a limited number of Pikmin to retrieve a key, dealing with dangers in a set area. There are up to thirty of these areas and the ultimate player goal is to overcome these challenges with none of their Pikmin dead. As the mode's name implies, this is a challenge and gives the game quite a bit of replay value.

Despite being almost a decade old, Pikmin 2 is not only a great value for the Wii and Wii U, but is simply a great game period. More casual players might want to start with the original Pikmin, but Pikmin 2 overall the better game despite a rather large increase in difficulty. If Pikmin 3 is even half as good as this nine year old game, fans are in for a treat.