Published by Oxygen, Developed by Rebellion

Cream of the cheese?

The popularity of Darts has really taken off these past few years (while Snooker apparently continues to nosedive). Capitalizing on this is PDC World Championship Darts 2009, the latest installment on Wii from Oxygen Games.

On startup it's clear that the presentation is already a marked improvement on last year's game, menus are brighter, have more polish and are generally much more appealing to look at. 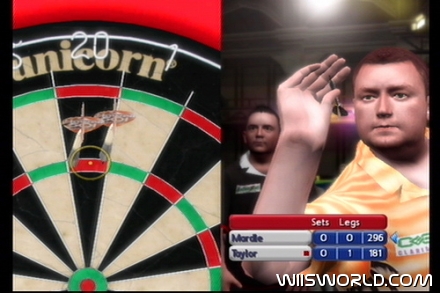 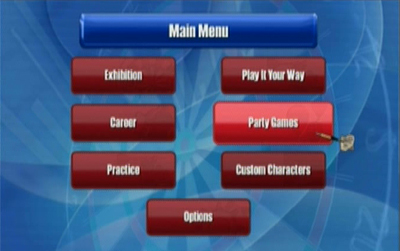 The learning curve on PDC 2009 has been made gentler for all. An instruction page is shown before each match, clearly explaining how to throw the darts. The on-screen meter displayed during shots is also improved, with a simple blob suggesting how much power you should try for. There's also an "assisted aiming" setting, which is more forgiving of inexperienced players, children, or general I-Am-Sam types with big inaccuracies in their throws. Play mechanics are crucial to the success of any Darts game, PDC 2009 scores a win on this front. The Wiimote is put to excellent use, throwing feels natural and intuitive without being too easy.

Graphically the game hasn't changed a great deal. Player models are reasonably well done and have a resemblance to the real pros, but are a little stiff in motion. Their arms are jagged and facial expressions are fixed in place a lot of the time, making them look funny. A number of darting arenas are portrayed, from Bolton to Las Vegas. The crowd is unrealistic and always looks the same wherever you go. Curiously they're always standing up, despite seats and tables being readily available. Some of them even hover in mid-air. At least they wave their arms at the right moments. 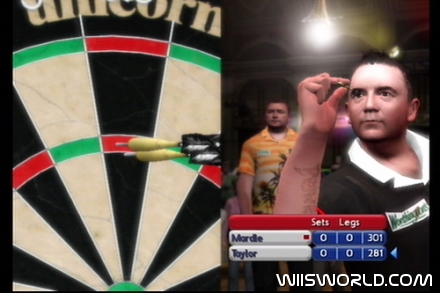 All new commentary is provided by the legendary Sid Waddell, although this time around he seems to have fewer lines to offer, you'll hear the same zingers a LOT. Eighteen professional players make a return to the game, all from the PDC circuit and complete with their average scores. This means each pro will perform just as he would in real life, more or less. You can choose to play as one of these guys if you have a favorite, or you can make your own player.

Once again the character creation tool is a shocker. Lacking even the most basic options like changing hair style and color independently means your chances of getting a good likeness of yourself are slim. 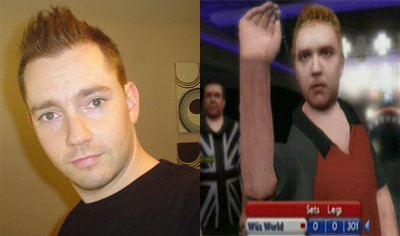 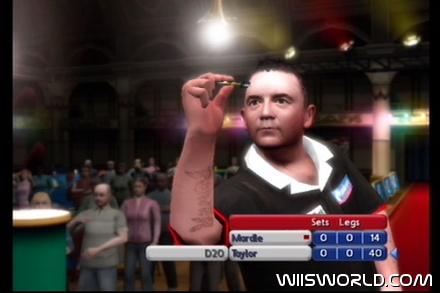 The main criticism I have is that the atmosphere conveyed in-game falls far short of doing justice to the sport of Darts. Crowds seem sparse and distant, with neither enough life nor voice to them. Players all walk on to the same theme tune, even though it is a catchy one, I can't help but feel that individual tracks for each would give the pros more personality. In all, the experience feels too generic and doesn't really grip you.

This stagnant feeling means that darting in single player mode quickly becomes a bit flat after a set or two. Playing against another human being breathes more fun into the proceedings. In addition to PDC tournaments, a wealth of party games are included in a separate section of the menu. These are 301, 501, 701, Cricket (both US and UK variations), Around the Clock, Shanghai, Half-it, Fives, Black 'n White, Killer, Knockout and Odd Man In. Unfortunately there's still no online play to speak of, which might potentially add a lot of lifespan to a game like this and something you'd think the developers would be keen to implement.

To summarize, though there are still significant shortcomings, the game has improved notably over the 2008 edition. It's the best Darts game around, and fans of the sport should enjoy it. PDC 2009 hits the shelves in Europe on May 29th.