Published by -, Developed by Treasure

Sin and Punishment 2 or 'The Star Successor' for us Yanks, is a very surprising game for several reasons. Most surprising is that Nintendo of America is publishing this particular title, one that goes against the Wii's almost exclusively casual audience and will most likely not sell very well. The game is a sequel to a game released on the Nintendo 64 more than a decade ago, and save for Virtual Console watchers, most have never played the original. Developers Treasure prove that despite being small, they still have what it takes to provide an amazing game experience and Star Successor does not disappoint.

Star Successor is in fact a direct sequel to the original Sin and Punishment and its story. The two playable characters Isa and Kachi do in fact have ties to the original game's characters, and there's a cameo or two, but players largely don't need to know anything to enjoy the sequel. The same can be said for the story in general, which involves the two characters being hunted by a group known as the Nebulox as well as hostile planet guardians known as Keepers. The story unfortunately is nothing special and falls into character and setting cliches already overdone in Japanese Anime and JRPGs, but honestly, players don't play these types of games for their stories. 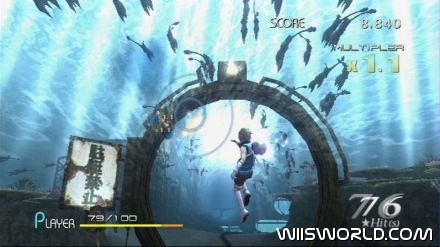 The gameplay will be instantly familiar to those who played the original Sin and Punishment. For those who haven't, the game is mostly an arcade-style rail shooter like the original Star Fox or a light gun title like Dead Space: Extraction. However, Treasure has added some small adjustments which make the game stand out. For one thing, the game takes place from a third person perspective and occasionally adjusts the character's position from behind the back to a side scrolling view like an old 2D title. Players can switch between locking on to enemies and manually aiming; the only real difference with the two playable characters is their ability with each.

Players can charge shots up like in Star Fox 64, but will largely miss out on the chance for a higher score. Each enemy killed, no matter how small will increase the player's score multiplier making even small enemies important for those craving high spots on the online leaderboards. Unlike the original Sin and Punishment, the jump ability has been nixed in favor of the ability to hover and fly around wherever you wish. You can still dodge enemy fire with a button press and more importantly can bust out a sword for Melee combat and to deflect certain projectiles. These may seem like minor additions, but Treasure uses them to full effect. They're ultimately necessary as the action flows nonstop and players will need every trick at their disposal to simply survive. Even on Easy, the game is incredibly difficult despite the short length of seven stages.

Star Successor marks one of the few times that a Wii game looks terrific on its own, and not 'for a Wii game'. Treasure must have worked closely with Nintendo on the game, as it achieves graphics and art that previously only Nintendo themselves seemed capable of. Each stage is distinct and interesting, from the besieged city at the beginning, to the set of underwater tubes to the literal nightmare set in ancient Japan. At the end and occasionally middle of each stage are a series of punishing bosses which not only are hard to fight on their own, but usually take advantage of the environment to do you harm. Nearly all are similar to bosses from the 8 and 16 bit shooters which Treasure excelled at and they can be counted among the few developers to have gotten the transition right. 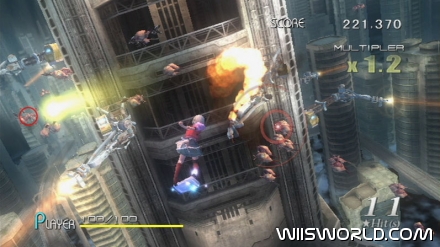 Star Successor goes the extra mile and offers more than a few smart system design choices. Despite the game's high difficulty, the game has unlimited continues and frequent checkpoints which are saved automatically, with the offset being a loss of one's current score. In addition, there is a wealth of control options including Classic Controller and Gamecube controllers to play with. Surprisingly however, the best control is simply using the Wii remote and Nunchuck as it accommodates the game's nature of aiming and moving one's character separately.

The music is also amazing in genuine Treasure fashion and the sound effects are appropriate even if they don't stand out. With the voice work for the intervening cut-scenes, Treasure once again proves their commitment to quality. Not only are the actors for the English dub not bad, the option for Japanese voice-overs with subtitles is included as well. Obviously Nintendo themselves didn't oversee this procedure, otherwise Metroid: Other M's voice work would have been very differently received.

Sin and Punishment: The Star Successor carries on the Treasure tradition splendidly. The difficulty may scare some players away, and Star Successor probably isn't for them. However, anyone that has fond memories of old school gaming and owns a Wii, this is definitely one release to check out.