I've been a fan of the Monkey Ball series since the original debuted on the Gamecube (RIP you misunderstood gem) back in 2001. So of the Wii's launch games, Banana Blitz stood out to me as one of the 'must gets'. Any regrets? *drumroll*

I initially thought the Wiimote would be ideally suited to this type of game, but it turns out I was a bit wrong. While the developers have put in a good effort on the controls, you just don't get the same precision that you do with an analog stick. To compensate for this, the levels in Banana Blitz are generally easier than those you'd find in other Monkey Ball titles. Due to the less responsive nature of the handling, speed is not usually your friend in this game because it can take too long to slow down. Movement in Banana Blitz generally requires a little more thinking ahead. 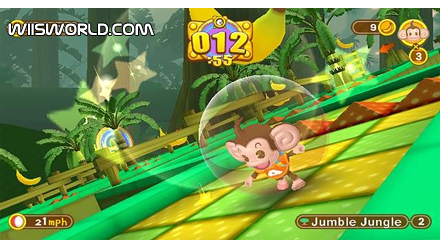 Instead of the horizontal grip used in racing games, Banana Blitz opts for a standard pointing position where tilting the Wiimote down rolls your monkey forwards. To turn corners you apply a twist either left or right. On the whole it works quite well but holding the controller pointed downward like this can get a little uncomfortable after a long session.

There's now more to it than just rolling though, Banana Blitz is the first in the series to incorporate jumping! There are two jumping mechanisms for you to choose from. You can either just press the A button, or squeeze the B trigger and do a lifting motion with the Wiimote. Using A is the safer option. You will likely find yourself jumping a lot, often not because the course requires it but because it can be used to slow your monkey down when he or she is going wayward. The jump you see is a bit 'floaty' and you can change your heading quite effectively in mid air.

Also new to the proceedings are the end of world bosses. The bosses are a bizarre bunch, giant monkeys in various costumes, an octopus and a giant robot. Jump is your weapon of choice against them, each boss has a weak spot you need to bash into. They don't need too many hits, but taking them down can still be frustrating. Most of the fights take place on a circular platform where if you get knocked off the edge it's the end of you. While you're rolling around in circles trying to dodge attacks the camera doesn't do you any favors either. You can easily end up bobbling around in the air like a tit, trying to strike that fatal blow without knowing where you actually are on the platform underneath. 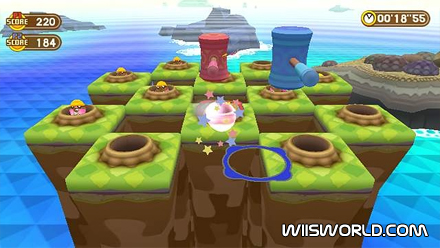 The graphics have undergone a revamp, they were great before and now they're even better. The level designs are smooth and colorful as always. There are 8 worlds in the game, each one with its own strong theme. Monkeys and balls have never looked so appealing (er..).

My main gripe with Banana Blitz is the length of the single player game. If you have any previous Monkeyballing experience you're not looking at much more than 5 hours of gameplay. And that's on the first time through. Eight worlds, each with eight levels and boss fights might sound adequate, but the earlier stages are a total breeze. The game doesn't really come alive until Ocean World, an excellent series of levels with some superbly atmospheric music. But by this point you're already over half way through.

This brings me to another annoyance, which was present in the DS game Touch & Roll as well. After finishing each world you're "treated" to a lengthy credits sequence. AV do me a favor, leave the credits until the end of the game where they belong. I'll let you in on a secret, I don't actually care who the Assistant Floor Manager was. True enough there's a weak minigame going on through all this if you can be bothered, but it's the same thing every time and gets boring quickly. 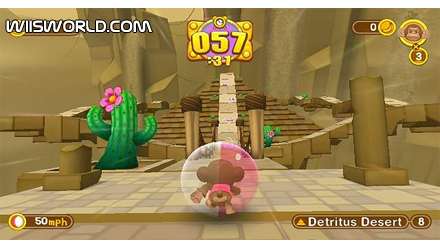 Of course, Monkey Ball is never just about the main game. As always there are minigames afoot. 50 of them in fact. That's right, fifty. Wonderful right? Far from it, because around 45 of them should never have made it in. There are so many worthless games here, you wonder what the developers AV were smoking. When it comes to minigames, quality before quantity should always be the rule. A rule followed to the letter by the original SMB. Not so here. In Banana Blitz they've gone for a 'more the merrier' approach. Most of the games are something you'd expect to see as a tech demo, the kind of thing you will play once and feel cheapened by the experience. Gameplay that's not only boring, but worse, SHALLOW. So of all the minigames, there's no more than a handful of good ones. The rest range from awful to christawful, most of these would embarrass even Mario Party. Literally a waste of space on the menu and time wasted trawling through them to get to the good few.

This review has probably sounded a bit negative, but don't be too put off. There's enjoyment to be had in Banana Blitz. Although short, the single player experience is a good one as always. The new control mechanics succeed more than they fail. If you can accept you'll no longer have pinpoint precision with your monkey, you'll have fun with Banana Blitz. I can't say I totally approve of the way the series has gone since its inception, but it's still Monkey Ball and I've got plenty of love for it. 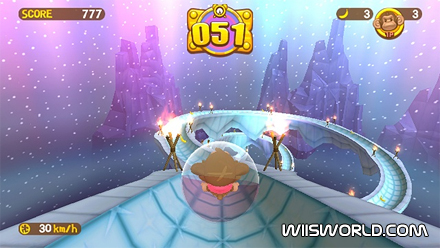 I really couldn't agree more about the credits. So horribly long. Glad I only rented it.

Yea they're a real drag, it flies in the face of good sense.

I might want to get it, I'm not really sure if it is worth 50 bucks.

Owlboy, I must say I'm glad I only rented it too. It was fun though. Hey, a weird thing about renting and Nintendo. All the places where you can rent games, ALL of them have never had a single Gamecube game or a Gamecube. Or an N64, at least in the town I live in (I live in New Zealand). But now they practically only have Wii games. They have 360 too, but all the Xbox and PS2 games are gone, and I asked them If they were going to have PS3 and they said probably not. Yes! I love you big N. PS3 sucks, 360 is OK, but Wii is the best ever.

I know exactly what you mean. In all rental stores I've been to, I never saw a Gamecube game (or at least none of the good ones).

As a fan of the smb games I have to say that this is a real disappointment, the mini games really are a let down and they were the only reason we bought this. My three year old son likes it though.

I don't know what everybody's talking about. I have the game and it's SWEET! The controls are a bit hard to manage, but still Ok. And the party games are stupid, but stupid in a good way! The games are funny because they're stupid. It's totally worth fifty bucks. Super Monkey Ball: Banana Blitz owns!

This game looks interesting and fun.

I was bored with the game until the Egypt level- now it's really feeling fun. The Egypt boss was one of the coolest gameplay experiences ever. If they'd made the whole game like the Egypt boss, it would have been heaven. As for the minigames- some of them are real gems. The hover vehicles are awesome fun, the racing mode is wonderful. And some of them aren't just dull and shallow- they're non-functional. The Sheep herding game DOESN'T WORK. You can get the scrolling window stuck to the top of the field in a 2-player game. It's the kind of quality I'd expect from an alpha-release of an OSS game. The "Paper Rock Scissor" is the stupidest, most complex PRS game I've ever seen.

Did you ever try skipping the credits? After the first time you're allowed to skip them, you know.

After renting it I know why blockbuster had 7 rental cases behind the box waiting to be checked out. It was terrible.

Amazing game, you peeps don't know what you're talking about. WII'S must get game.

I don't exactly LOVE monkey ball. But I might try this one. The first monkey ball I played I didn't like, but since it's for the Wii it must be twice as fun.

Party mode totally rocks. I have this game and I love it. Even my 3 year old can play it. Wooohooo!

Big disappointment. Just doesn't stand up to the original and SMB2 on Gamecube. It's just simply not a challenge like the others were. Kororinpa is better, but even shorter than monkey ball.

Wait, so Wii's World actually did their own review?

This is the first monkey game I've played. The game itself was not at all satisfying for me, quit after a few levels. As far as the mini games, I can see their usefulness. If you are intoxicated, and all you want to do is shoot asteroids, and it is multiplayer. The asteroid game is the one good one I've found so far. Someone want to let me know what the others are? I could only get through 5-10 of them. Thanks.

How's the single player on smb2? Because I'm not sure about this game and smb2 seems good, but I don't have a lot of friends!

I love wii's world it's so cool!

I find these minigames shallow and pedantic.

This game is not any better than the previous entries on the GameCube but at least it's fun to play around with it.

You can skip the credits by holding down the a and b buttons at the same time.