The House of the Dead: Overkill

Published by Sega, Developed by Headstrong

The House of the Dead: Overkill review

Just a few months into the Wii's third year and already things are looking far more promising for the 'core' gamer than in 2008. A case in point is The House of the Dead: Overkill, released very early into the year.

Overkill seems to be a spin-off, prequel and reboot of the series all at the same time. House of the Dead's recurring protagonist Agent G stars, but is joined by Samuel L. Jackson clone Issac Washington. Together, the two of them work to contain a 'mutant' outbreak and try to ensure that it doesn't spread much further. Joining them are hottie Varla Guns, campy villain Papa Caesar and disturbed warden Clement Darling. While the plot is definitely nothing to write home about, the sheer amount of B-movie style presentation such as fake movie posters will at least guarantee some laughs. 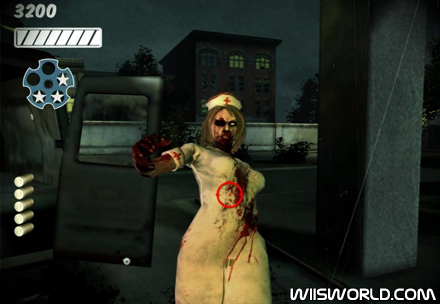 Gameplay is largely unchanged from previous HotD titles. Players are guided along a linear path while blasting and shooting whatever enemies get in their way. The initial weapon is a simple magnum pistol, but as the action unfolds players get the option of using a shotgun, SMG, assault rifle and eventually a minigun. Almost every weapon can also be upgraded by finishing certain level goals, topping high score lists and gaining certain collectibles in the stage. Doing so earns the player money to upgrade and buy these guns, but also unlocks extras such as videos, art and models.

Overkill's graphics are a mixed bag. The character models are fairly low quality and technical glitches such as clipping occur periodically through the game. Worst of all, the frame rate suffers during scenes of intense action. However, the art style and sheer camp that persists both in-game and in the menus can be seen as charming.

The sound is quite well done and unique at the same time. Rather than being disturbing and intense like in Resident Evil or one of the earlier House of the Dead titles, you'll usually hear some kind of creepy/goofy music that again brings to mind the old B-movie slasher/grindhouse flicks. The music styles used include both disco and country among others. Oddly enough, it fits. The voice actors also do a good job, with the possible exception of Agent G. The actor in question doesn't seem to know in which direction to proceed with the character and at times G can sound stilted, occasionally weird.

Overkill is fun, but unfortunately it doesn't last long. Finishing the game the first time only takes around two hours in total. The unlocked director's cut and dual wield modes don't add much more. Players can continue to unlock more videos, art and models (both 2D and 3D) but this stuff is mainly just for completists. Still, this is always one of those games you'll want to play for short bursts once in a while, just like at the arcade. The game is short, but sweet and would likely get Tarantino's own seal of approval.

I have this game and I thought it was fun! Takes me back to my hotd saturn and dc days.

You can stick your complicated and boring games like call of duty and command and conquer, this does what games should all be.. FUN.

I'm going to agree that this game is a blast to play. Some of the dialog and sequences are actually really funny too, particularly the ending.