Published by Pixonauts, Developed by SnapDragon

Hardkore fun (...not that kind)

After almost ten years of sporadic development, The Kore Gang has hit our beloved Wii. Originally intended for the first Xbox console, the title was halted for various reasons until recently being rescued by a few german firms. Publishers Pixonauts sent me a copy for this review, and I'm thankful they did.

The Kore Gang is an action-platformer type game in three (count 'em) dimensions. It tells the story of the evil Krank brothers and their plan to outvade the earth. That's right, "outvade", because they live in the planet's core. The Kranks appear to be modeled on Ren from Ren & Stimpy (one of them even sounds a lot like him), except they all have blue skin. Out to stop them are our three heroes; Pixie, Madboy and Rex the dog. They're all housed in one big armored suit (the kore) and we get to switch between them at any point in the game using the Nunchuk's C button. 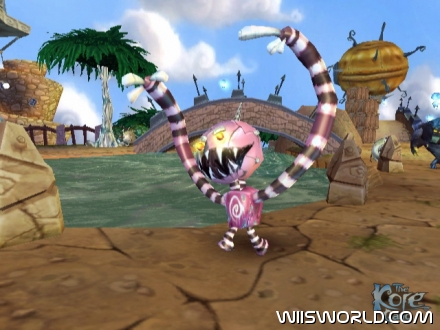 Each of the gang has their own special set of abilities; Like Pixie can double-jump, do ballet pirouettes to float and latch onto things Indiana Jones-stylee. Madboy is more of a fighter and has all the attacking moves, while Rex can open safes, eavesdrop, follow scents and generally run faster. All of these skills are put to good use in the intelligent level designs and the overall variety in gameplay kept me well entertained the whole time.

If you played and loved Psychonauts back in the day, you should instantly feel right at home with The Kore Gang. It's clear a lot of time has been spent on the presentation, cut-scenes and menus all look great and everything is done in a similar jaunty kind of way. The game has a good number of zany characters, including a giant clockwork monkey called Joe le Taxi, who serves to carry you between levels and takes payment in bananas. A major plus point is the high quality of the voice acting, it goes a long way in bringing these characters to life and helping the story along.

Another boon for the game (boons are good) is the humor that permeates it. It's not often a game manages to be funny (not intentionally anyway), but this one does, including some great OTT song and dance routines by each of the Krank brothers before you take them on in battle. 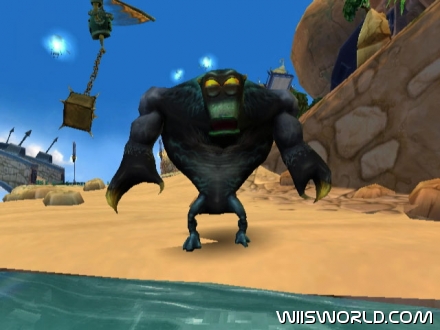 In terms of graphics, whether or not there's anything here that couldn't have been done last gen I don't know for sure. But more important than the technical gubbins is the style of the art, which is brilliant.

That's not to say the game is flawless, there are one or two snags. Super Mario Galaxy raised the bar for 3d platformers when it comes to camera control. I wouldn't say The Kore Gang quite lives up to that, it does a fine job for the most part but the camera can occasionally get stuck on parts of the environment, making jumps more awkward than they need be. Also the game is decidedly selective on where you can use a certain skill - Pixie's ballerina pirouette can only be used to float across the gaps it wants you to, if you try it in a non-permitted area you'll plummet to a nice death. In the scheme of things though, these are small complaints that do very little to downgrade the fun factor.

There are 32 levels in all, most of them involving little sub-quests or just getting to the end, along with some boss battles thrown in for good measure. Each level also has 10-60 "zeeks", which are glowing pickups you can collect by pointing the Wiimote at them (a bit like the lumas in Super Mario Galaxy). For completionists, collecting all the zeeks in a level gets you a gold medal. Gamers of a reasonable skill level are looking at around 8 hours of gameplay in total, maybe a little more to get all of the gold medals and secret purple zeeks. The sections near the end of the game are more difficult and could prove frustrating to younger players. 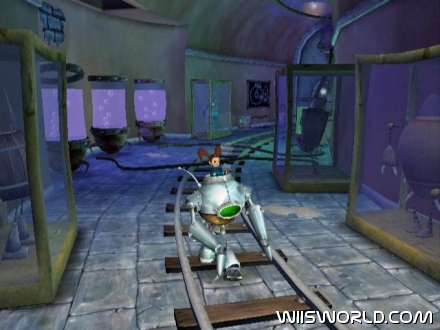 As far as I know The Kore Gang isn't available to buy outside of Germany yet, but the PAL disc I've received has English voices and menus - a release throughout Europe should be forthcoming, with a US release possible later in the year (when a "distribution partner is found").

Fans of the classic Psychonauts will likely feel some form of de ja vu, but The Kore Gang is no cheap knock-off. It's a game packed with imagination and humor, backed up with solid and varied play mechanics. Be sure to check it out if you're in the market for a platformer, it's most definitely among Wii's best.

A good and thorough review. Thanks. I was surprised at the 8 hours of gameplay: that seems very short. Nonetheless, hopefully it will get released worldwide.

What Arindam said. Very well done. I'm glad this game is going to be $20 new when it comes out in the US after you said it's about 8 hours long. Makes it a more reasonable buy, especially in a few years when it's only going to be like $10. Comes out November 8th 2011 homes.