Fitness is for everyone, apparently.

Yes this review is a bit late, but better late than never. I decided that I needed some sort of exercise this summer and thought Wii Fit could do the job. After about two weeks of straight exercising (sort of), I can say that it performed at about par to my expectations.

Ever since the Wii was announced, Nintendo has been stressing the importance of exercise and Wii Fit is the pinnacle of fitness inducing products they've released so far. Does it make a great game, however? In some respects, it gets close. But don't expect to be amazed by this product's gameplay, graphics, or sound. Nintendo didn't put any emphasis into those categories because Wii Fit's point is getting you to work out more and not to impress you with fun gameplay and stunning graphics. 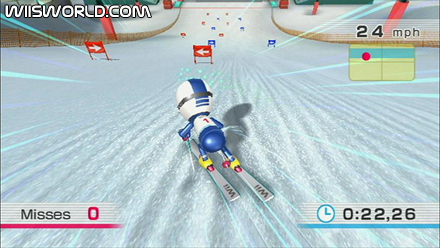 Wii Fit is a hard game to review the gameplay of, because the point isn't exactly entertainment value as much as it is exercise. Some of the activities are fun, while others seem a bit pointless. Basically you start out a session with a body test (that is if you want to, of course), where the game measures your weight and balance to come up with a BMI (a system of rating your body mass).

Then you can continue to take a few more tests which Wii Fit uses to play the "guess your age" game, telling you how old your body acts. The tests can range from one-foot balances to agility exercises. The game randomly selects two tests, so you can sometimes unfortunately be given two difficult tests, seeing as they vary in difficulty, and you may be given a result that changed greatly from yesterday's. 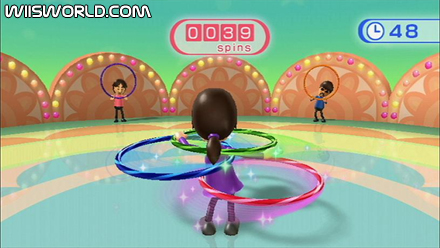 Once the body test is completed, you can begin the training. Training exercises are sorted into four categories: Yoga, Strength, Aerobics, and Balance Games, each serving different purposes. Some of the Aerobics and Balance Games are fun, but the rest are just trying to put stamina and strength to the test. An example of a fun activity is skiing, which feels realistic but the game lasts for only a short period of time. An example of a, well, not fun activity is the basic run, in which you put a Wiimote in your pocket and run in place while your Mii runs through an island. While neither of these exercises fully bring out the fun, they do what they were intended to do. I always start out a work out with a basic run because it makes a good warm up and I get a good sweat.

The exercising becomes more fundamental with the yoga and strength training as your personal trainer (your choice of male of female) shows you the exercise then you perform it. Simple. The system works by measuring your balance or in some cases your timing. While this makes sense for Yoga, I don't really see how balancing perfectly on one foot while doing an exercise makes any difference from doing the same exercise without holding perfect balance on that foot, the exercise is still being performed and I'm still burning the calories.

In the end, the games and activities really do make you work hard and they certainly help with balance and posture. They just aren't as fun as they could be. 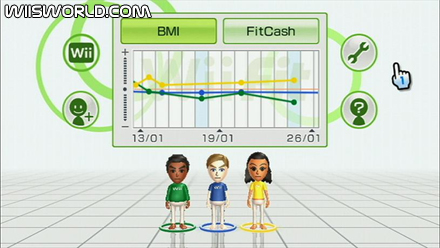 What can I say? The game lasts for as long as you want it to. When you create a new in-game account, you're told to make a goal and time in which the goal is achieved. Once you meet your goal, I guess you're done. So the lifespan really depends on the size of the goal you set and the time you intend to take to meet that goal. You can make a new one when you're done, but to me that feels like you're destroying the purpose of a goal in the first place. And if you're goal is too long, you could potentially get bored of the activities given to you. The balance games can get old after a while and some of the Yoga poses and strength exercises get easy after mass repetition. But that means you're getting stronger, so it works. 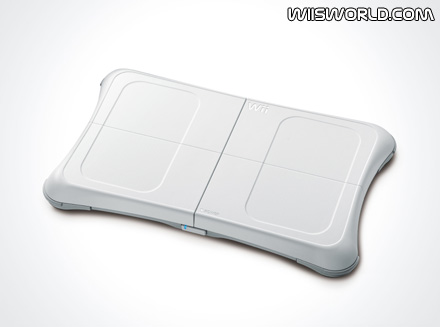 Wii Fit's graphics are in the same line as Wii Sports and Wii Play. Miis are fully utilized and everything is sunny, cheery, and unrealistically clean. What I find most impressive about the graphics is the trainer. While not glowing in graphical beauty, the trainer makes realistic movements. I'm almost certain they used motion capture because the trainers move very naturally. Granted they don't move their lips when they talk (and even the characters in Twilight Princess did that, without even having voice overs), but everything about the trainer seems calm and approachable.

Another point to bring up is the presentation. Of course Wii Fit fares the common white/blue icons to select, and the menus are as you'd expect. Most of the activities have graphs of the Wii balance board that show where you're current center of gravity is. While a bit plain, this method doesn't complicate the experience. The game's presentation almost feels like a cross between Wii Sports and Brain Age if you can believe it. All in all, the graphics give more than they take and you won't find yourself complaining about them or necessarily praising them. 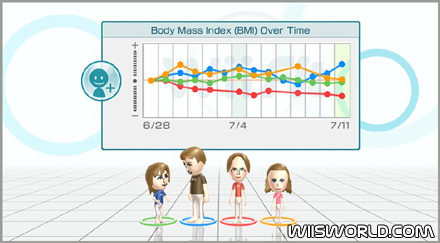 Everything about Wii Fit's music and sound effects seem to emphasize relaxation. The music can be calming or it can be rhythmic, depending on the activities being done. Yoga would of course be soothing while something aerobic like the Basic/Advanced Step (an exercise in which you move your feet on and off the board in sync with other Miis) would have a catchy beat. Note that all the music is clearly made up of MIDIs, but the sound effects make up for it. The voice work for the trainers succeeds in encouraging the player to try their best and the atmospheric sounds (as in the basic run, for example) offer some small improvements. Don't expect to find any of the music in a soundtrack or anything, just that they make the game a little more enjoyable.

Whether to trim fat or to tone muscles, Wii Fit is a success in the fitness genre. My biggest complaint is that Nintendo could have put extra effort into making the game just a little more exciting. As of now, I don't really enjoy using this product, but it does actually beat going to a gym. If you want to improve your fitness and get in shape, Wii Fit is certainly a consideration.

The bottom line is that for $90 you get a fitness machine that will help make you look and feel better, if you use it consistently, and you get a peripheral that may be supported by several 1st and 3rd party games in the future. However, Wii Fit isn't for you if you're looking for a video game in general. Wii Fit doesn't follow any rules of good video games because it simply wasn't intended for that. It works, but you won't have as much fun as just sitting on the couch and playing Zelda or Mario.

My family got the Wii Fit for my mom for mothers day. I personally have no interest in it. Although I can see how other non-gaming people would like it but I am looking for fun in video games (I have enough fitness in my life).

I actually won Wii Fit in a prize draw a couple of weeks back. I haven't connected it up yet, but will do sometime soon as I could do with losing a few pounds.

I lost interest in Wii fit after a week. I still play it occasionally, but not much. I'm waiting to wear my balance board out on a better game. Hopefully Zelda Wii.