Let's all go back to a time when our TVs were not graced with the presence of our esteemed console. This was when we had only heard a little of a new gaming experience called the 'Revolution'. Can you remember your thoughts on motion control? If you were like me, you probably imagined motion control in video games to have perfectly mirrored movements. Link would move his sword exactly how you held the Wiimote. The Miis would hit their tennis balls only if you made the exact accurate motion to do so.

However, the original Wii motion control turned out to be less glamorous than we thought. In stark contrast to the perfect one-to-one sensing of our dreams, the Wii instead measured gestures and made assumptions, looking at motions as cues to animations, in the place of button pressing. Several years later, Nintendo announced new technology that would improve on the original idea, taking us back to our former dreams. The remedy was Wii Motion Plus, and the game Nintendo would use to showcase it was Wii Sports Resort. 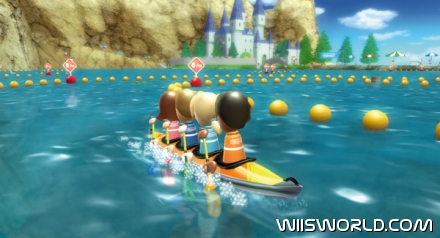 Well, Wii Sports Resort is finally here, along with Wii Motion Plus, a peripheral that you will immediately notice adds significant length to the Wiimote itself. The game comes packaged with a special Wiimote jacket that can accommodate the extended end piece.

As with the first Wii Sports, the game itself acts as a tutorial for a new technology improvement that will likely become a requirement for a plethora of 1st and 3rd party games. Nevertheless, there is enjoyment to be had behind the tutorial. Wii Sports Resort is a fun, casual experience that can attract new players and prepares us for the onset of cooler and more diverse uses of the peripheral. 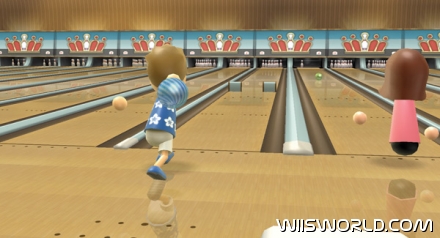 It's hard to summarize the gameplay of Wii Sports Resort. The sports activities are so varied in control that the only way to fully review the game's level of entertainment is to look at each sport individually. Unfortunately, the review would be so unbearably long in order to accomplish such a task that a formidable summary is the best one can do.

The game has a stunning number of sports available to play, twelve in all, more than twice that of the original Wii Sports. Most of these sports have more than one activity associated with them. For example, Swordplay (which is sure to be favored by many players) has three different games that each include different rules and goals. Others, like archery, have up to three levels of difficulty. The sports themselves vary in necessity of Wii Motion Plus. In swordplay the powers of Wii Motion Plus are absolutely required; the Wiimote on its own would not be able to detect such precise movements. Others, such as canoeing and cycling, seem almost out of place, as the capabilities of the peripheral are by no means put to the test.

As for entertainment value, only a relative few will have immediate appeal. Swordplay, as mentioned twice earlier, Archery, Table Tennis, and Bowling are the few games I considered to be more enjoyable than the others. They showboat the abilities of Wii Motion Plus in a way that makes them fun to try and master. Other sports, like Frisbee, Basketball and Golf, can also certainly be very enjoyable, but aren't as exciting or as innovative as those listed above. Some games like wakeboarding, canoeing and cycling lose their appeal quickly and won't be sports you're likely to show a newcomer as an example of the Wii's amazing new capabilities. 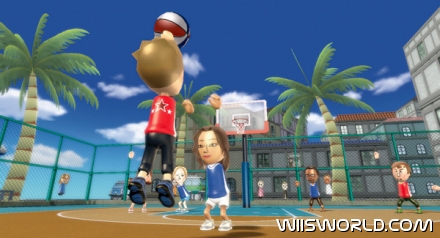 Unfortunately, I was too stingy to purchase a second Wii Motion Plus and am too unlucky to have friends who have also purchased Wii Sports Resort so any games requiring multiplayer, such as the esteemed Dogfight, I was unable to play. So as to the entertainment value of the multiplayer, I have no idea. But I can only imagine that playing the game cooperatively and competitively heightens the experience a hefty degree.

The gameplay of Wii Sports Resort in general is fun and exhibits the magnitude of new control capabilities involved with Wii Motion Plus in an exciting way. Nevertheless, some of the less exhilarating sports prevent the gameplay as a whole from earning flying colors. 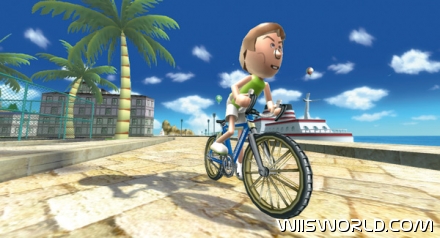 As mentioned before, a proud few of these sports are wildly replayable while the rest have a shorter longevity. Those sports that present different kinds of experiences for each run through are the ones that will have the longest lifespan. Some sports simply don't offer anything new for every playtime and therefore, won't be calling you back repeatedly.

In retrospect, Wii Sports Resort has a higher lifespan than Wii Sports. There is more to do, including collectible items, or stickers, to find. Some minigames are unlockable and, while none are too difficult to unlock, will give you something to work for. The lifespan isn't fantastic, but you will certainly find enjoyment out of the game for some time. 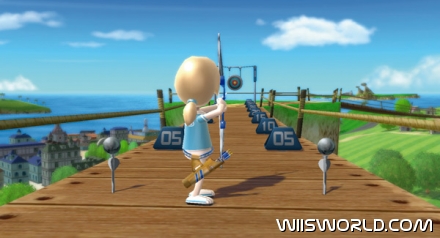 The first thing you will notice in Wii Sports Resort is the presentation. Instead of feeling like you're at a day trip to the local sports club (as in Wii Sports), you really get the sense of being on a full sports vacation. Wuhu Island is varied and colorful, and the small nuances of the sports make them feel genuine. I think the sport with the best presentation is perhaps cycling. While one of the least entertaining sports to take part in, cycling does show a very interesting view of the island. Not only that, but the way in which it presents the race at the start and end is very cool.

While Wii Sports Resort is by no means 'Current Gen' in terms of graphics (if we take the highest standard as THE standard), the game is one of the prettiest games you will put in your Wii. The colors are vibrant, the water effects are believable, and the blurring effects make the sports feel more natural. While it may not seem like the kind of game that would need attractive graphics, Wii Sports Resort doesn't disappoint. 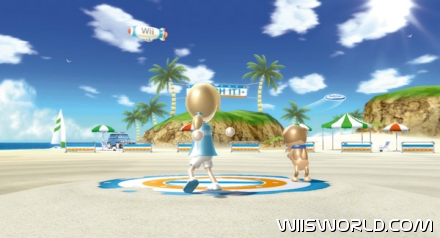 Although repetitive at some points, the sound in Wii Sports Resort is lurid. Most sports have an appropriate music track associated with them. Swordplay, the victim of much praise in this review, gets the highest marks once again for its music. More specifically, the music in showdown is fantastic. It makes you feel as if you're right in the middle of an epic samurai movie, fighting your way through bandits to save some helpless village.

All in all, the music is a step above the more generic soundtrack of Wii Sports. It makes the experience an artistic one at most, and puts that much more life into what is already a healthy beast.

Every so often, Nintendo finds it necessary to release a new peripheral to (hopefully) improve play quality. Wii Motion Plus is essentially that. However, the level the Wii Motion Plus raises the experience to is significant. The potential has been increased. Wii Sports Resort proves such a statement. It uses Wii Motion Plus in a fluid manner, keeping the controls interesting and fun despite however uncomfortable the player may be with the stark difference.

I think this deserves a A-. Most of it's mini games are pretty fun and worth checking out. I know it's stupid to compare this with other reviews but most gave the game somewhere around a 93/100 and I think that was a pretty accurate rating. That's just my opinion though.

To me, B+ is in the "great" category. An A to me signifies an epic experience. It seems to me like a lot of people don't realize how good a B+ rating actually is.

I think B is a fine score. What many reviewers fail to do is review certain games based on their INTENTION. Wii Sports Resort is an intro to Wii motion plus and it does that job amazingly. It's like with Megaman 9 some reviewers gave it a low graphics rating despite being intentionally like that. Makes no sense to me but Nova I read the entire thing and you're spot on.

One thing I like about this game is that if you're tired of one sport, you can go on another sport which you haven't tried before. I reckon this deserves an A, but still, a good review.

The control and physics are unmatched that's an A+ but it's not a deep long demanding core experience so A no. In regards to wm+ vs a standard wiimote, ironically I'd say the standard motion hasn't been topped out yet, not only does wm+ take things forward it also points a finger at 3rd parties saying NO MORE EXCUSES. Wii haven't seen real Wii games with polished motion like a gta, splinter cell, interactive fps a tagged on headbutt and aim gesture in godfather is hardly maxing out a wiimote/nunchuck. In a way it's come too early, OR IS THAT 3RD PARTIES ARE LATE.

This game was not meant to be groundbreaking or a best seller, it is just a demo like the original Wii Sports to introduce the extra precision of the Wii motion plus. Also this is the first game introduced with the new attachment, the only reason 3rd party developers haven't made any FPS' or RPGs with the new precision control is because they haven't had any time. I believe that we are going to see plenty of games make good use of the motion plus in the next 2 months.

It's tricky to score a game like this. I just posted my review. For a party game I think it's an A, but I'd probably rather play BioShock. But then black eyed peas is better for a friday night than mozart if you know what I'm saying. Like Sharpy said, it's a great demo of what motion plus offers. I think the next round of games are going to be really interesting.

Wow. I was at fisherman's wharf in San Francisco yesterday and there was this giant Wii Sports Resort event going on. Basically a large section of the sidewalk had been turned into a play area. Interestingly enough, it was packed with people.

In United Kingdom, they turned one of the game stores in to a mini Wii sports beach party.

They did the same in Times Square. Only it rained.

Wow I've just seen it time square. That's about 10 time better than what we had. By the way, do you guys think motion plus might be a scam, because when you take it out, you can't play any games. For all we know, the motion plus games could be exactly the same without motion plus.

I want the game, cause it has a dog and everything. I love the new ideas you people are coming up with and I might get it soon, maybe for Christmas. Yaaaaaay.

What is motion plus? Oh jeez *confuzzled*.

I thought Wii Sports Resort was a HUGE improvement over Wii Sports! It has more fun sports to play, it added stuff like basketball, wake boarding etc. however, I thought they should've brought back tennis, baseball, and boxing because I had fun with those but whatever, it's just my opinion! This game is fun to play for all ages! My grandma is 52 and she LOVES it