Sewn out of memory.

Kirby's Epic Yarn is the kind of game one would think perpetuates the belief that the Wii is a 'kiddie' system. However, those willing to spend time with the first Kirby adventure in 11 years will find a game that surprisingly manages to appeal to casual gamers, kids, and hardcore Nintendo fans alike.

The story is nothing but fluff, pun intended. A new enemy known as Yin-Yarn emerges, hoping to take over both Kirby's home Dream Land and the yarn infused world of Patch Land. Yin-Yarn accomplishes this with a magic sock, (no this isn't a typo) which turns Kirby and anything else sucked into it into Yarn. Luckily, Kirby has help in the form of Patch Land's Prince Fluff, and the two take off to both restore the broken Patch Land and stop Yin-Yarn once and for all. For the most part, it's nothing special with the exception of the excellent narrator and storybook style, making the whole game seem like a bedtime story being told to a kid. 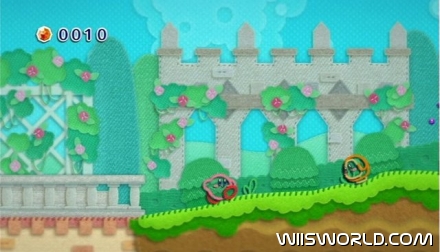 Because Kirby has been turned into yarn, his ability to suck up enemies doesn't work any more, as he has no real stomach to 'digest' them. Luckily, not only can Kirby still transform into alternate forms, he can also grab and throw objects and enemies. Most of the game is straight Kirby platform adventure, though every now and then you'll transform into something different to change up the gameplay. Kirby can turn into anything due to being yarn, and the gameplay constantly differs from racing segments to old-school shmup affairs. Nearly every level has some kind of different gameplay mechanic; you might spend time in one level riding up the updrafts in chimneys while riding a bar of musical notes in the next. Very little motion control is required in the game with players mostly using the popular 'NES remote' style used in Super Paper Mario and others. The only exception is Kirby's train transformation which can get more than slightly frustrating. Thankfully, the train is only used twice in the entire game, so the frustration is limited.

Epic Yarn appeals to both the casual and hardcore crowd in a brilliant fashion. For casual fans, the ability to play co-op with the second player as Prince Fluff and the fact that the player cannot actually die in the game are welcome features so that anyone can have a good time. However, for those players who wish for a greater challenge, collecting the game's beads and secrets items proves to be addicting and challenging. While items gained in treasure chests usually only serve as ways to unlock mini-games and customize the player's own personal apartment (kind of like Animal Crossing), collecting enough beads in every level unlocks new hidden levels. Including boss fights, the game has seven worlds, each with seven different levels making a fairly lengthy Kirby title that should last most players seven to ten hours. Players can go back to any level to unlock new stuff, but after they are done with the game, there isn't much reason to go back.

Epic Yarn is probably the greatest example for the argument that realistic graphics aren't needed for a game to have amazing visuals. In keeping with the 'Yarn' motif, the entire game's art looks like a production from an arts and crafts store. Kirby and Prince Fluff are made entirely of yarn, as are their enemies. Buttons, zippers and spools of thread are used as switches and pulleys, with backgrounds having a construction paper aesthetic to them. As if this wasn't great enough, the animations in which Kirby transforms into his various different forms are stunning, fluid and seamless. There are several times throughout the game where the player may think that Nintendo used stop-motion animation such as those from Aardman it's so good. 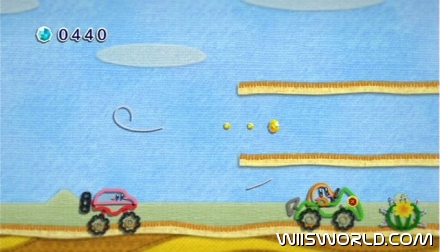 Aside from the excellent narrator in the game, there isn't really any voice-work aside from Kirby's occasional grunts. The music is quite surprising for a Nintendo game, mainly consisting of jazz inspired tracks with heavy emphasis on piano. The soundtrack is mostly excellent, and shows that Nintendo is headed in the right direction when it comes to using instrumental music. There is the occasional track that sounds out of place, and certain tracks are repeated over more than one level, but overall player ears are in for a treat.

While not the 3D Kirby game that has been teased endlessly over more than a decade, Kirby's Epic Yarn nonetheless deserves a spot alongside the best modern Nintendo franchise titles such as Super Mario Galaxy, Metroid Prime and The Legend of Zelda: Twilight Princess. It's been a long time coming, but Kirby's finally caught up to his peers.

Nice one Gray, your reviews get better each time. Sadly Kirby's taking a while to reach us in Europe.

11 years? There wasn't released any Kirby game in 1999. Disregarding remakes and non-platformers, what about Kirby & The Amazing Mirror (2004) and Kirby Mouse Attack (2006)? If you're only thinking about home console games, then Kirby 64 would be 10 years ago, not 11.

I have to wait until 2011 but I'm so in on this, it's just so cool looking, thanks for reviewing it. OH can "MATURE COUGH" gamers who hide behind walls waiting for the blood to go away in FPS games stop calling others kiddy, hypocrites.

I love FPS games, but throughout my life so far, *Mature Cough* that cute pink ball/blob of Bada**ness has always been my favorite character. He is cute, strong, pink, he is kirby. The sad thing is now I can't enjoy engulfing my enemies in kirby's mouth *tear* *tear*.