Those who played Marble Madness back in the glory days of the NES will likely have a soft spot for marble games. I happen to be one of those people. The premise of the game is simple, you take control of a marble and you have to maneuver it to the goal at the end of the level. These levels take the form of an obstacle course with various hazards, like thin walkways and enemies. Kororinpa takes this concept and brings it into the modern era, adding a few bells and whistles to the gameplay while doing so.

Here it's not quite a simple case of rushing to the end of the level. Throughout each one there's a trail of orange crystals, all of which must be collected before you're allowed to finish. This adds to the challenge, but sadly also cuts down on the amount of 'cool shortcuts' you can take. If you finish a level fast enough you're awarded a cup, ranging from bronze up to gold. 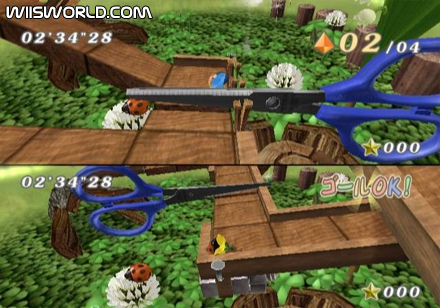 Some comparison with Super Monkey Ball is unavoidable (ok, maybe not unavoidable, but I'm doing it anyway). While Ai-ai and his fellow apes handle pretty well, Kororinpa's controls are noticeably tighter still. In fact this is the best use of the Wiimote I've come across, developers Hudson have clearly taken great care to ensure the game is responsive and remarkably tactile. Unlike Banana Blitz, there are no frustrations - if you go off the edge it's your own fault and invariably you know you can do better on the next turn.

You get to rotate the world in 3D by moving the Wiimote on the X and Z axes (i.e tilting it up/down and also twisting it either side). The level design makes good use of this, for example in some places you will need to use gravity to bring down sliding platforms while your marble rests safely against a wall. A small touch, but definitely adds to the neat factor. Like other leisurely pursuits, Kororinpa isn't always kind to the wrist. You adopt a standard pointing posture, but the game does at times require you to hold the Wiimote at awkward angles. In fairness though, with a cool head it never causes you to lose control of your marble.

The visual style on the whole is bright and cheerful. There are 50 levels in the main game, split across themes like The Park, Candyland, Day Town, Toyland and Space. You couldn't say Kororinpa pushes the envelope when it comes to graphics, but what's there is pleasing to the eye. 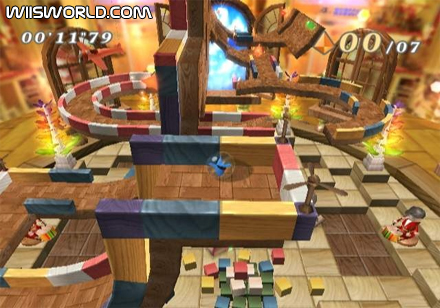 A further 15 secret levels are gradually unlocked as you make your way through. Unfortunately the secret levels aren't of the same high standard as the rest, based in a bland cardboard setting they lack the vibrancy and have 'development scraps' written all over them. As you progress you also unlock a number of alternative marbles to use, along with other music tracks. The newer marbles offer a personality of their own, with sounds unique to each. More importantly they all handle differently, with a number of varying characteristics like speed, bounce, weight and slide.

The sound effects are good in an understated way. Each time you knock your marble against a surface your Wiimote will emit the appropriate noise, adding to the sense of feeling. Other general sounds come from the TV. The majority of the music is chirpy, suiting the game well but also largely forgettable.

Kororinpa has taken some flack in other reviews for being shortlived. While it's true you can breeze through it in a matter of an hour or two, that's somewhat missing the point. For a capable gamer the longevity comes from getting the gold cup times, which can really be a stiff challenge. There's also a secret green crystal to find on every level.

The forgiving nature of Kororinpa means that even younger gamers or those less experienced should be able to finish it after some practice. At no point can you 'die' - if your marble falls off the edge it just gets returned to the beginning, or to the last milestone on the longer levels. Since the Wii's philosophy is gaming for everyone, Kororinpa ties into that very well.

Noice. I hadn't even heard of this game.

I heard about it, but I never really knew about it, or what the point of the game was.

They changed the damn name for us release, but still a great game.

Great stuff, leisurely pursuits, I love it. Anyway, I think we need hardcore games too, but I'd love this game.

My wife, cousin and I love this game. Great for 2 player split screen head to head action.

So three games got an A-, big woop. I didn't review those other two though, personally I don't like Excite Truck all that much.

Wiisworld, what games do you have? Or are you like a big team of people that all have loads of games, oh yea and nice one owning jammer lol.

I'm just one guy, most of the reviews are submitted by visitors (except the 2 I wrote). As for games, right now I've got Wii Sports, Zelda TP, Kororinpa, Monkey Ball: Banana Blitz and Excite Truck. Getting Mercury Meltdown, Godfather and Scarface soon.

I totally agree. I got this game the other day and to be honest I was surprised how good it was.

Good review. I love the game and it's perfect for the Wii. I enjoy this slightly more than Mercury surprisingly. Only problem is the lifespan.

I have not got the game but I will buy it soon.

Isn't "Kororinpa!" what Tingle says all the time? Only he adds the Japanese version, switching the R's to L's. Kooloo lim. PAH.

Why would the Japanese version have L's instead of R's? They don't ever pronounce L in Japanese. In fact, whenever something english with L's in it is said in japanese, they switch the l's to r's.

Oh my god this is the best game, it's so fun. My friend has a Wii and he rented this game, I tried it and we both loved it. It's kind of hard but not that hard if you do it slowly and now he wants it for xmas.