The Wii, despite being the most revolutionary video game system available, has struggled in the "deep games" market. Everyone knows that the majority of Wii games are cheap mini-game compilations. However, the system has some glittering jewels that more than complete the collection.

Enter Medal of Honor Heroes 2. This is arguably the most complete package that we saw on the Wii in 2007 (just a second, I mean OTHER than Metroid and Mario). Complete online functionality is obviously the game-seller. An arcade mode targeted to more casual gamers, and the full Wii Zapper support serves to reel buyers in. 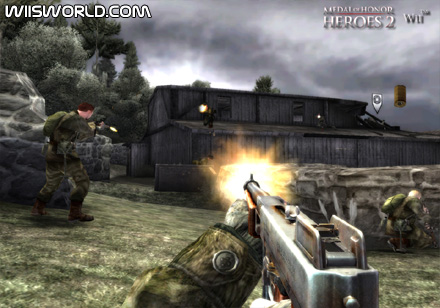 This is the most intuitive Wii shooter so far, with the most customizable controls I have seen on the system. This allows every gamer to set their personal preferences, be it super-sensitive for near PC-control playing speed, or low, for easier precision. I personally found the Wii Zapper to aid gameplay, making the game seem that much more immersing. The Zapper makes you feel as though you were holding your Thompson and actually tearing through soldiers. It's quite appealing. My only complaints with the controls can be fixed, or apply directly to the Zapper.

My first issue is the zoom feature on sniper rifles. Twisting the Wii Remote to zoom in and out is just strange. You'll twist your wrist to zoom on a Nazi, and your sight will move with your wrist. It's annoying, but if you go to the menu, you can change this. The other complaints are related to the Zapper: To change weapons you have to reach your index finger up to the top of the Zapper (onto the control pad). This is a minor quibble, as you should be behind cover when you are switching weapons or preparing to throw a grenade. Another problem is the inability to screen-lock as you do with a normal control scheme (this allows you to aim at an enemy on the edge of the screen without turning). You can suffer these problems and experience the new layer of gameplay that the Zapper affords, or play normally. Either way the gameplay is smooth. 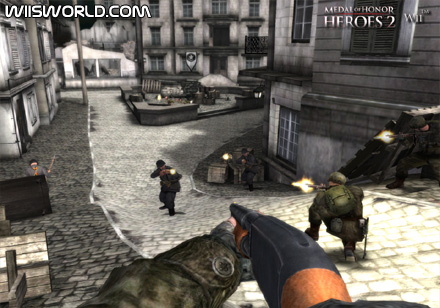 The graphics are some of the nicest we've seen on Wii. The character models are decent, although they seem constantly recycled. Some of the particle effects are bland, but the weapons and reload animations are extremely nice. The environments are constantly changing, and although they are all similar, they're nothing to complain about. Overall the graphics are smooth, crisp and clean. They are generally above Gamecube quality graphics, barring Resident Evil 4. 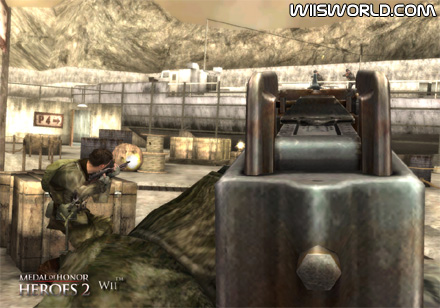 The ambiance of the battlefield adds to the gameplay greatly. The constant sound of gunfire and explosions makes the conflicts seem much larger than the slightly linear levels. The voice overs are fine, but they seem to blend into the orchestral score. I love orchestral scores... it's a weakness.

The arcade mode serves as a fine diversion to the sometimes frustrating campaign mode. The Zapper definitely adds to the experience here, without any problems. This mode is not very deep, but it is very fun. Blowing through hordes of Nazis with a shotgun and infinite ammo gives perhaps the most satisfying feeling available in the game. 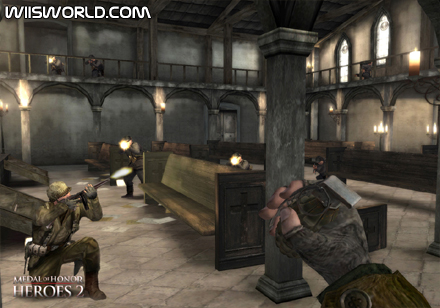 The online is still the Make-or-Break deal. Likely, the majority of people buying the game will do so for the promise of 32-player online deathmatches. These are fantastically done. The connection is smooth, and the action is intense. You have everything from sniper nests, to close-quarter hallways, to open fields. All of these can be found in one level. No doubt, the online features will keep you busy for a long time.

You can go solo for personal glory, or team up for your nation, but your weapons aren't too varied. The guns are also quite similar between teams. Instead of just switching weapons randomly a la Halo, you'll learn to fight with an automatic rifle, bolt action rifle, shotgun, bazooka, or sniper rifle. Five weapons. Still, the battles never get old and the games are intense, you'll always find somebody on, so get connected and battle away. As a plus, the connection runs on EA Nation, so there's no need to deal with Nintendo's, let's face it, clumsy Friend Code system.

All in all, EA has fit more content into one disc than I have seen in a while. All of it is good, some of it is great! Medal of Honor Heroes 2 will potentially keep you entertained for a long time. You'd be doing yourself good in buying this game.

Sounds like a good game, but will it be better with the Zapper.

I have this game and I agree with you Randolph. The Zapper actually feels really nice in the game and the online deathmatches are spectacular. The graphics aren't the best but this game has such good controls (with only the few limitations you mentioned) and fun gameplay that it makes up for it. I was actually surprised at how much I liked this game.

Personally, I find the game to be better with the Zapper, Nuclear Milk. It adds a layer of immersion that you can't get with any other system. However, it does add some minor problems to the gameplay.

It's a good game. I know the Wii can do better graphics, but the gameplay is spot on. A must play for any FPS fan.

Brilliant, this review sets this purchase in stone for me, anybody know the europe release date?

Going to get this. I am in the UK and it isn't out until next week (8th Feb). Can't believe the US has had it available for so long- I have been dying to play this game. Got fed up with slow-down bug in COD and less than perfect controls in MOH Vanguard.

If anyone out there lives in Australia then don't buy this game. They got rid of online.

Are you serious that they got rid of the online feature in Aussie or..?

I've heard that MoHH2 online has been dropped in Aussie. That's deeply disappointing, and I guess all of the gamers that have been chomping at the bit for online have to wait until Red Steel 2. I can't believe EA would make such a stupid decision.

This game is awesome except for the fact that it's pretty hard to tell who's your enemy because the uniforms look similar. You have to point at the player for like 3 seconds for it to say the players name and see if he's on your team.

I have this game. It's fun while it lasts, but I don't agree with the lifespan rating. I got bored of this game in two weeks. Other than that it's a pretty good game.

I'd have to disagree with the multiplayer, it's a good start but it's NOT smooth, the lag is unbearable at times.

Wow, I considered this game to look worse than 007 golden eye as far as character models go- environment was like early PS2, but yea the game play is quite nice. But your review seems opinionated once you started talking about graphics.

a wii gamer: The Medal of Honor series has been struggling over the years with EA taking the same WW2 action and throwing... read more

Eljize Blize: Going to get straight to the point, Medal of Honor Heroes 2 is one of the best first person shooters out... read more