Sometimes a reboot CAN work!

In the days of the Super Nintendo and Sega Mega Drive, companies tried to create an action platform game and mascot to attract the same popularity as Mario or Sonic the Hedgehog, similar to the glut of Grand Theft Auto clones in the 2000's and the enormous amount of FPS games today. One of the few mascots good enough to survive with a series was Rayman, a whimsical European creation whose most distinct feature was his lack of arms and legs, but also had games that rivaled the platform quality of even Mario. What was supposed to be Rayman 4 ended up becoming the Minigame heavy Rayman: Raving Rabbids, and Rayman hasn't had a new platforming adventure in almost a decade. With Rayman: Origins, Ubisoft's mascot character is given a reboot and unlike so many movie and game reboots, this one is possibly even better than the originals.

Amusingly, Rayman's adventure in Origins is started from nothing more than downstairs neighbors complaining about the noise made by Rayman, his pal Globox and a few of their friends. Except that in this case, the downstairs happens to be the land of the dead, and the neighbors are undead skeletons wielding an army of dark creatures. It's great that Ubisoft pokes fun at the fact that no one really cares about plot in this type of game, and this same type of humor pervades this whole experience. 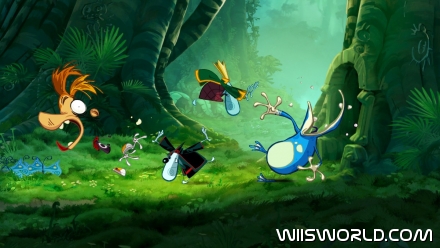 The gameplay is best described as Donkey Kong Country Returns mixed with a bit of New Super Mario Bros. Wii and a hint of European craftsmanship. All the platform staples are in Origins, from jumping to wall-running to item collecting and very little is actually new. However, much like the best Nintendo games, it's the way that Origins plays and feels that makes it stand out. The levels are very well designed and the difficulty constantly goes up. The game never becomes too difficult for casual players, yet rewards the skills of platform veterans with special stages and challenges. However, Rayman's adventure is less about simply getting to a stage's end than it is about exploration, as it is necessary to collect hidden glowing Lums and the often caged Electoons in order to progress in the game. This might grow a bit repetitive for some players, but the collecting never feels as arduous as RPG level grinding or the collection-heavy N64 era platform games.

Origins is not only great for people who love 2D platforming gameplay, but can also be great as a family game due to having 4-player co-op, a feature strangely missing from Donkey Kong Country Returns. Rayman and his buddy Globox are both characters, and player 3 and 4 are given twin Teensies, much like the bland Toads in NSMBWii. While players can eventually gain new costumes so that more than one person can be Globox or Rayman, not everyone can be the same character. Interestingly, while the characters all have the same basic moves, they feel different. Globox is heavier than the others, Rayman is the lightest and the Teensies can float and use magic. Likewise, each character has their own array of stunning animations. Still, it's kind of a shame that they couldn't have gotten a different character for player four, as the Teensies are a little bland.

Rayman: Origins is quite possibly the best looking 2D game ever made. The backgrounds are incredibly imaginative and detailed; while the basic themes of each world are similar to other platform games (i.e. water, ice, fire, jungles), each usually has a different spin on them. The water level is mostly pirate inspired, the fire levels are gigantic kitchens and the ice levels are inside monastic temples and someone's enormous fridge. Amazingly, things often go on in the backgrounds of these levels too, with pirate zeppelins, freed prisoners, smoke before a glut of fire and other details giving life to the surroundings. The new UbiArts system that Origins has premiered is simply incredible, and gives huge weight to the argument that 2D games can still be relevant. 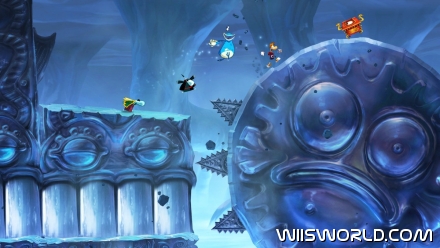 Almost as amazing are the characters themselves. Each of three characters (because the two Teensies are essentially the same character), has their own unique animations for every single one of their moves. Facial expressions change, one can see weight distributed and every character's personality comes to life through their movements. Rayman hesitates when winding up a punch, Globox hangs precariously from a ledge with his front teeth and the Teensie magic resembles both a breeze of air and Kung Fu at the same time. The supporting characters are good too, but they simply don't have as much presence as the main characters, which is the way it should be.

Surprisingly, the sound in Origins is also incredible. The music is possibly the most varied in any game ever, with salsa, jazz, upbeat violin, slide guitar and even Digeridoo music, which to this reviewer's knowledge has never been in a game before. Nearly every track is memorable, and each world has its own theme that is remixed when players go into secret areas. Likewise, the two main themes are constantly intermixed into the levels, giving a similar musical feeling to Disney films and the best Warner Brothers cartoons. The sound effects are good, but not nearly as memorable. Especially funny and great is the way that the game handles the limited voice acting; rather than the gibberish found in Rayman 2 and Banjo-Kazooie or normal English voice acting, the characters who talk all speak in Pig Latin. No seriously, listen to the fairies when they talk, it IS all in Pig Latin and it is awesomely funny.

Origins is also a fairly lengthy game. Each world has about five to six levels and there are ten regular worlds with a bonus secret world for those who are diligent about finding Electoons and passing the treasure chest chasing stages. Nearly every level has a time trial which can both get a single Electoon and a time trophy for each level. One can also get medals for going above the normal amount of Lums found. Unfortunately, the trophies and medals don't really result in any extra rewards, so this reviewer thinks that they are mainly intended for the achievement/trophy hunting crowd on the Xbox and Playstation. Still, for those who want more of Origins after the main game, one can do worse.

Rayman: Origins feels like something that shouldn't be possible these days - an amazing, long, retail 2D platformer. While the unfortunate release date will likely hamper sales of the game, Origins is one of the best games to come out this Holiday season and one should not pass it up if they have even a remote interest in platform games. Origins is a great game to play in between sessions of Zelda: Skyward Sword and even after. It isn't just a great complement to the Wii's final holiday season, Rayman: Origins is simply a great game, period.