One step forward, two steps back.

Sonic the Hedgehog has had a troubled history over the past decade. While Sonic Adventure 1 and 2 were fairly successful, both critics and fans of the blue blur have disliked the direction Sonic Team has taken with the character. Cheap gimmicks, additional animal 'friends' added in every installment and overall poor game design have surprisingly not deterred sales, but have left old-school Sonic fans with a bitter pill in their mouths. Along comes Sonic Colors, riding alongside the hype of Sonic the Hedgehog 4. Initial reports and hype have suggested that this could be the 3D Sonic game to finally put the series back on track. Does the game succeed? Well... yes and no.

In comparison to the other 3D Sonic titles, the story of Colors is fairly simple and tries for a more comedic approach when compared to the more serious stories of the earlier titles. In order to 'atone' for his numerous crimes and world domination schemes, Eggman has built a stellar Interstellar Amusement Park for people to enjoy. Naturally, Sonic and Tails go to investigate, and also naturally, it's another plot to try and take over the world/universe by sucking the energy dry from aliens known as Wisps. For the most part, the story doesn't interfere with the gameplay and the cut-scenes are free to be skipped at any time. However, those who watch the cut-scenes will undoubtedly dislike the cringeworthy dialogue and overall bad jokes made to try and get them to be more 'comedic'. 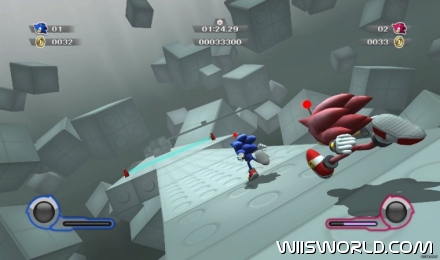 The graphics are surprisingly spectacular, not just for a Wii game, but for a game in general. Rather than have the different 'amusements' all based on traditional platformer world staples like ice, fire, etc., Colors instead sticks mostly to a space motif not unlike the Mario Galaxy titles. Though players will start with the Tropical Resort stage, stages like the cavity-inducing Sweet Mountain and dazzling Starlight Parade won't fail to put a smile on their faces. The only real exception to this rule is the Wisp planet, as it comes off as being a fairly generic type level.

Unfortunately, the same cannot be said for the gameplay. Admittedly, Sonic Colors does make several notable improvements over the previous 3D Sonic titles. There are no cheap gimmicks like in Sonic and the Black Knight and Sonic Unleashed, nor do you play as anyone except Sonic in the game. Amazingly, Sonic Team also seems to have finally perfected the usage of a game camera as there was no point in which the camera interfered with gameplay during the single player adventure.

Despite these improvements however, Colors still suffers from problems familiar with the 3D titles since Adventure. There are still many instances in which players will find themselves dying for no decent reason; sometimes it will be due to a lack of rings in the area and too many enemies or a lack of warning before needing to perform an action such as a homing attack. Other times, it will be because the game doesn't properly explain ideas in the tutorials, despite the 'helpful' navigator option turned on. There are also irritating control quirks; in one particular level when riding a roller coaster, Sonic can jump up IF the player isn't holding in any direction. Even trying to go up to the coaster's next car however, will usually result in a frustrating death. Unlike previous 3D Sonic titles however, these things, while hurting the game, are not as frequent as in the older games and some of the levels are very fast and fun. They still have yet to reach the heights of even Sonic 4 however, and continue to need work. Likewise, the bosses in the game are not only incredibly easy to defeat, they also repeat. Yes, instead of having seven distinct game boss fights, Colors only has about four, as it repeats three of the boss fights twice at the stage ends. Admittedly, the second time around the bosses are more difficult and have more attacks, but wouldn't it have been better to simply have different bosses? 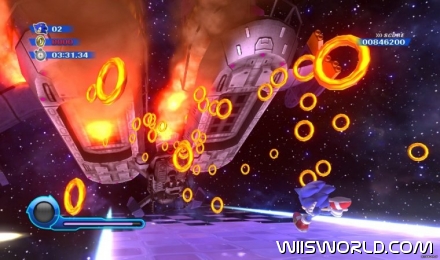 Also of interest are the Wisp powers spread throughout the game. Over the course of the game, Sonic gains seven of these abilities, but doesn't have all of them activated until the very end of the game. For the most part, these abilities either propel you in a certain direction or give additional attack abilities. While initially these powers seem nearly useless in the purpose of simply getting to the end of a stage with a decent amount of rings, once all of the Wisps have been activated, entire new level sections open up for those going after S ranks on a stage or hidden red rings. They add a new element to the game, but only hardcore players will likely appreciate their use.

The audio in the game is a mixed bag. The sound effects are nothing bad, but aside from one particular throwback to Mega Drive Sonic aren't that special either. The music is surprisingly good, and has a broad range. Once again, the music is composed by Jun Senoue, and promises great things for future Sonic games if Colors is any indication. Unfortunately, the same cannot be said of the mostly terrible voice acting. While Sonic has been given a new voice, it ranges from 'cool' to 'douchebag' depending on the situation. Tails is okay, but not particularly special in any way. Dr. Eggman's actor however, is terrible and is done by the same actor who played him in the nauseating Sonic X dub. Not helping matters are Eggman's two robotic flunkies, one of which is fine but the other alternates between cowboy, pirate, mafioso and chatterbox accents.

Unless the player is a completionist, Sonic Colors will not last very long, taking this reviewer only about four hours to finish. If the player is up for more however, there are numerous ways to prolong the game. Like the Mario series' gold and red coins, every stage in Colors has a number of red rings to collect. The reward for these rings are new stages in the game planet mode. The 'Game planet' is the game's attempt at multiplayer, in which two players can both be robotic versions of Sonic, racing to the end of stages in a competition. These are okay, but in some cases are more frustrating than the stages of the main game and are a lot more bland in terms of scenery. Finishing all of these stages and gaining every red ring will simply get you the ability to play as Super Sonic, no more, no less.

Sonic Colors may still not be the return to stardom for Sonic that many of his fans have been hoping for, but it shows promise in the series nonetheless. If Sega can fix the cheap deaths and design issues which plague the 3D Sonic titles, they may eventually have a winner. For now however, if players absolutely need a Sonic fix, they should go with the DS version of this game or even just Sonic the Hedgehog 4: Episode 1.

Great review Gray. Looks like this one is dividing opinions a fair bit.

Jun Senoue had nothing to do with the soundtrack of Sonic Colors (luckily, IMO). Oh wait, I think he's credited as vocals coordinator or some other unimportant role. But he hasn't composed a single track.