Earth is under attack from an invasion of enormous aliens, and the only thing that can protect the planet is a group of unlikely, yet mighty, heroes with special abilities. Unfortunately, the aliens are too powerful for the heroes to fight individually. They must join forces and work together to defeat their common enemy. These uniquely different heroes can morph into powerful weapons to crush the invaders or turn into objects like a giant fist or bridge to interact with and traverse the environments.

The Wonderful 101 has no review on Wii's World. Write a review 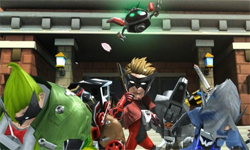