Not legendary, not really Zelda

Over the years, Nintendo has periodically allowed other companies to develop games featuring Nintendo worlds and characters. Some of these collaborations have resulted in surprisingly good additions to Nintendo's repertoire, like the Zelda Oracle titles or F-Zero GX. There have been at least a few duds however, key examples being Metroid: Other M or the infamous Zelda CDi trilogy. Hyrule Warriors, largely based on Koei Tecmo's Dynasty Warriors series, falls somewhere in the middle. It definitely should not be considered in the same league as Nintendo's Zelda titles, but it also is not a 'bad' game.

Hyrule Warriors' story starts with a typical Zelda plot of good vs. evil but quickly becomes convoluted and odd. Most of the typical Zelda cliches are present, from Triforce gathering to Ganon once again being resurrected. However, the story uses the excuse of Ganon's essence being 'spread across time and space' to bring characters and settings from the 'realistic' Zelda titles. One level will involve Midna and Zant from Twilight Princess, while another has Impa fighting an entire Goron army and Darunia from Ocarina of Time. Eventually, players take on the role of the King of Evil himself, Ganondorf. If players are excited by these scenarios and don't care for a cohesive or interesting plot, they will likely enjoy the blatant fan service. 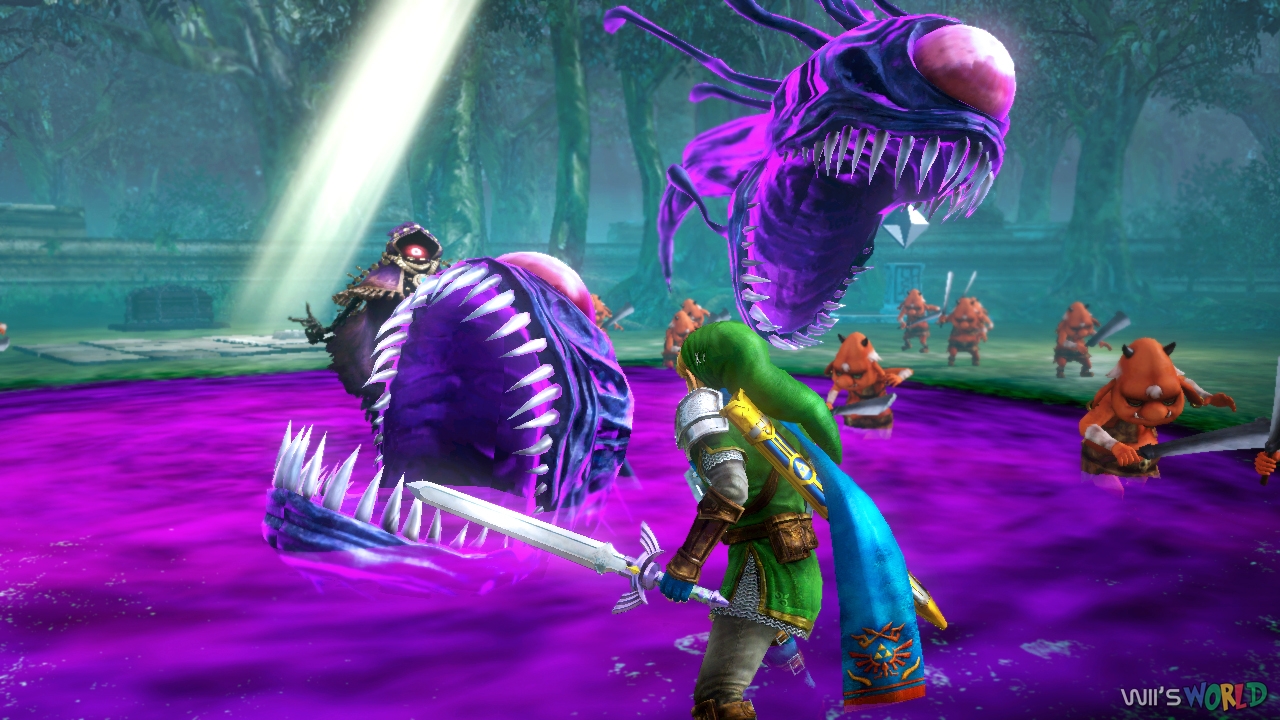 If players have tried a Dynasty Warriors title in the past, HW will no doubt be familiar. One or Two players are put in a small open world in hopes of defeating a rival army. Using beat-em-up style action, players defeat enemy swarms and the occasional captain or boss. In general, the game maps are littered with areas that are under the control of either the player or their enemy. Defeating enough enemies in an area gives control to the player and spawns support troops. This doesn't mean that the area cannot be invaded by the enemy again however, which makes for a tense tug of war between the two sides. Occasionally players will fight more difficult enemies, which in the case of Zelda equates to familiar foes like the Lizalfos, Darknuts, Iron Knuckles and Shield Moblins. There are also the occasional boss fights, which range from generic villains like the knight Volga to recreations of classic Zelda monsters like King Dodongo. Unfortunately, due to high health meters and the use of powerful Fairy Fountain attacks mean most of these become repetitive and dull very quickly.

In HW's various modes, gameplay largely maintains the repetition of constantly attacking enemies, with occasional dodging during harder fights. However, the player is given periodic new objectives, such as escorting another character or capturing specific areas. The only map in which this feels slightly different is on Death Mountain, where two of the game's keeps can be used to attack the opposing side. Sadly, these are the only real variations on otherwise thinly veiled excuses to capture areas or fight hordes of enemy soldiers.

In addition to its story mode, Hyrule Warriors does have a slightly more interesting 'adventure' mode. Players are treated to a recreation of the map from the original The Legend of Zelda, complete with the menu characters and images being made of pixels. The objective in this mode is to fill out the entire map by completing specific challenges on each tile of the map. These can range from defeating a certain number of enemies to surviving for a set time. While this mode is slightly more interesting than the story mode, it still suffers from the overall repetitive gameplay. 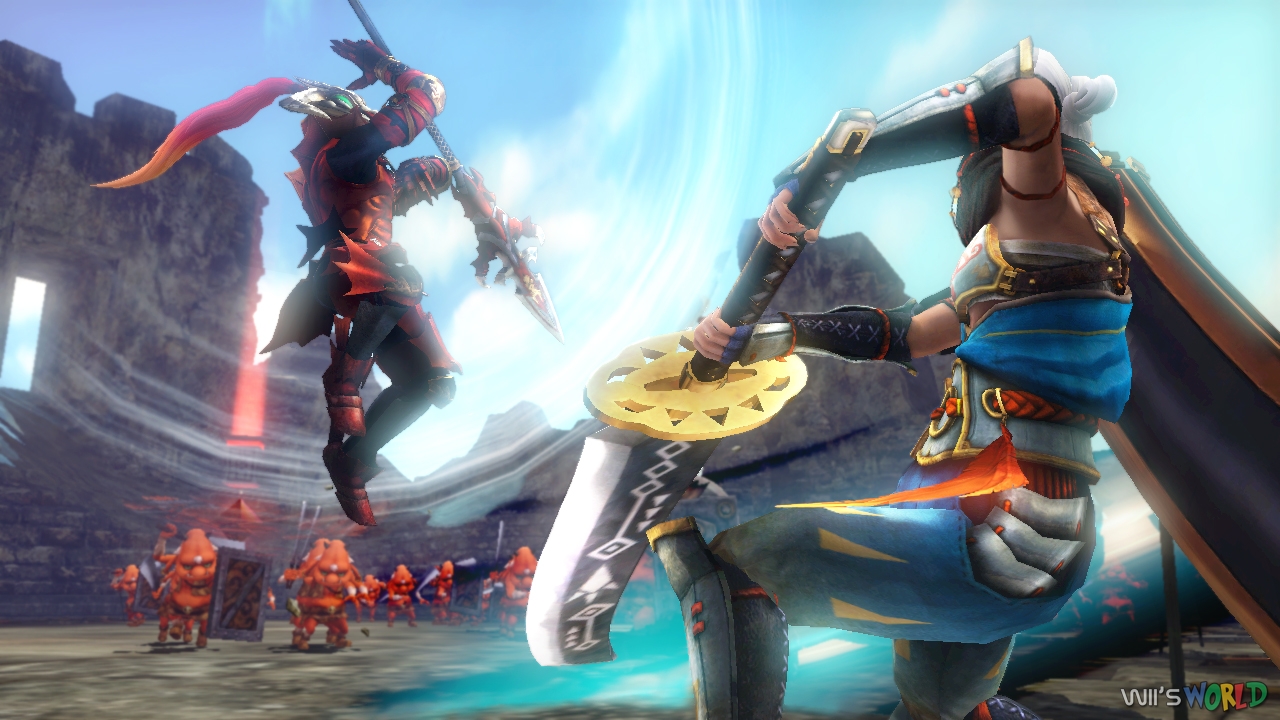 The game's graphics are... decent at least. Technically, the developers should be commended on having no bugs and only very minor frame rate issues. However, while a new 'realistic' looking Zelda game is nice, the overall graphics are barely better than Skyward Sword was on the Wii. The character models look good, but the backgrounds and environments look sub-par.

Sound is a bit of a mixed bag. For the most part, characters 'talk' in the same style that was established in Twilight Princess. The only real exception is a narrator, who recaps story events between stages. While the narrator is pretty good as a voice, it seems an odd addition. Quite a few familiar Zelda sound effects and music cues are used, but they are used so often that many players will likely grow sick of them. Music largely consists of remixed Zelda themes. When these are orchestral, they almost all sound incredible. However, Koei Tecmo continues their odd habit of including metal interludes during high action sequences, and the result feels inappropriate for both Zelda and the Dynasty Warriors series.

The story mode in Hyrule Warriors will likely take most players 10 hours to finish, with at least five more for the Adventure mode. Players can choose to play on hard if they want, but many will likely grow tired of the game before doing so. To be fair, the 'Warriors' titles do seem like they are more conductive to quick, arcade style play like the beat-em-ups of old, so it can be a good game for weekends or having friends over.

In an interview, Shigeru Miyamoto admitted that Koei Tecmo wished to make Hyrule Warriors more like 'main' Zelda titles, but he convinced them otherwise. This seems like a mistake in light of how the game turned out. Other than fan service, there is little to distinguish Hyrule Warriors from KT's main series. While hardcore Zelda fans may enjoy it, HW does not seem like a game that is worth full price. When a price drop occurs, the game may be worth keeping in a Wii U collection. However, as the game is now, most are better off waiting until 2015 for the next real Zelda game.

It's a little disappointing that the game isn't better, but I'd still like to play it eventually. It's been years since I played a Dynasty Warriors title, so I may be able to get some enjoyment out of it. I'm not the biggest Zelda fan, but it's something to play on the Wii U until Smash drops later next month.