Open the door and draw your sword, everybody hunt the dinosaur

The Wii U has had its fair share of games from older platforms re-made for the unique experience this console offers. We have seen the impressive Batman: Arkham City on Wii U, and even Mass Effect popped up for some strange reason. The console has a cult following that has been growing more steadily since the release of Mario Kart 8.

With Monster Hunter, Capcom has brought their very own cult following to the Wii U as well as the 3DS. I am of course reviewing the Wii U version, which I got free with the Mario Kart 8 deal. Slaying monsters, making potions and talking to people, sounds like an idea life for a warrior, so I wanted that experience. 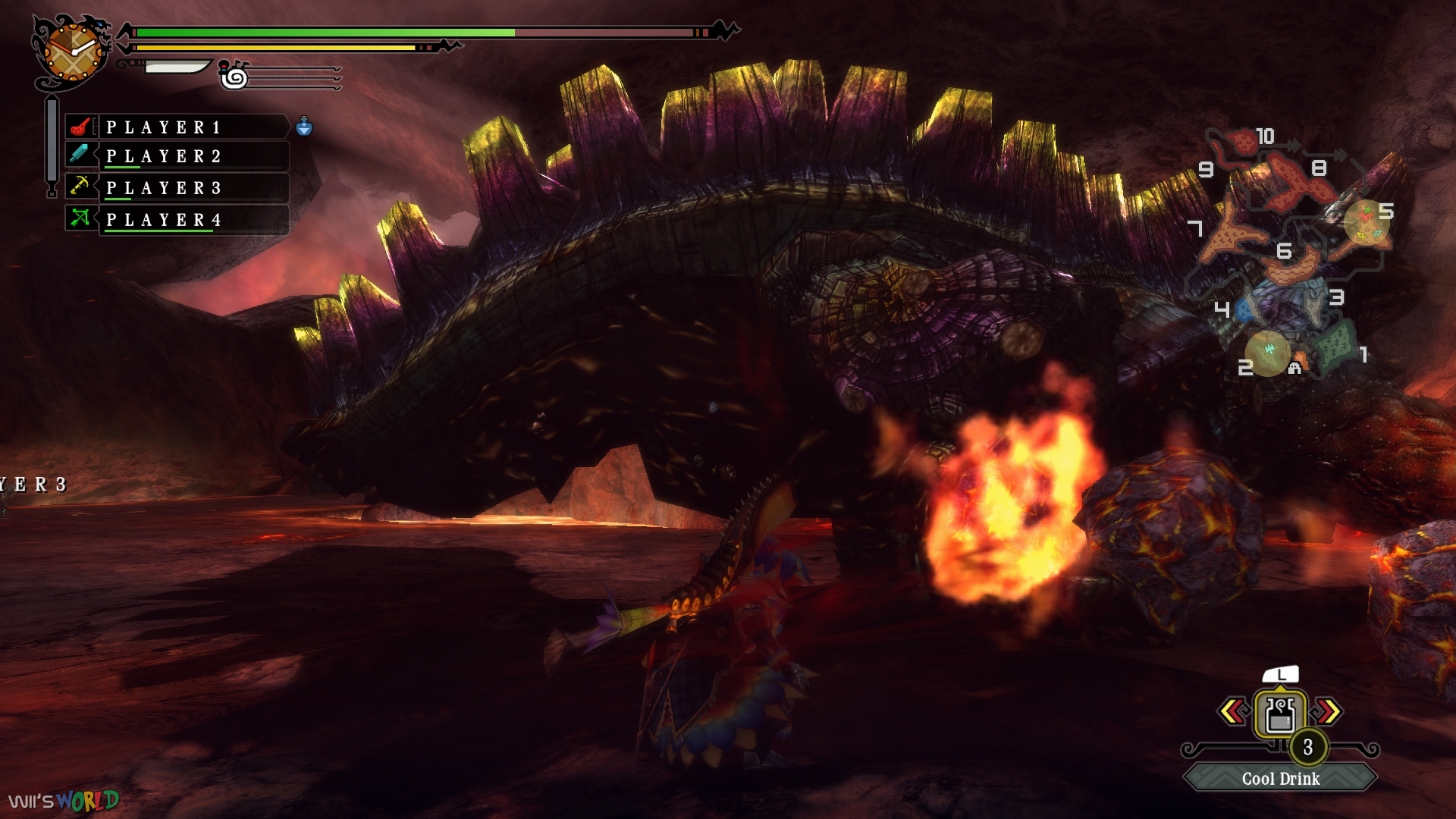 So, Monster Hunter 3 Ultimate is of course a remake/port of the third Monster Hunter game in the series that was released on Wii. The game received very high review scores and they were all well deserved. So what makes this version Ultimate? Will it be like Gohan from Dragon Ball Z - one of the most powerful things on the planet, but doesn't do anything with its power? Well, if you read on then you will find the answer you're looking for.

Monster Hunter 3 Ultimate is an 'action' game that puts you in the shoes of, well, a hunter. There is an earthquake in Moga Village, and everyone starts losing their shit. This earthquake is of course monster related, so you have to go to find out more. The story then branches in different directions. The main thing featuring gameplay and action is the wonderful quest section.

Nearly everyone in Moga Village will serve you in their own way, besides a few pointless characters. The quest gameplay is rather simple to explain. There is a lovely lass who is part of the Hunter's Guild, and in order to get recognized by those guys you have to do some hunting. Whether the hunting is actually killing, capturing or repelling, the more you do the more you get noticed by the guild. 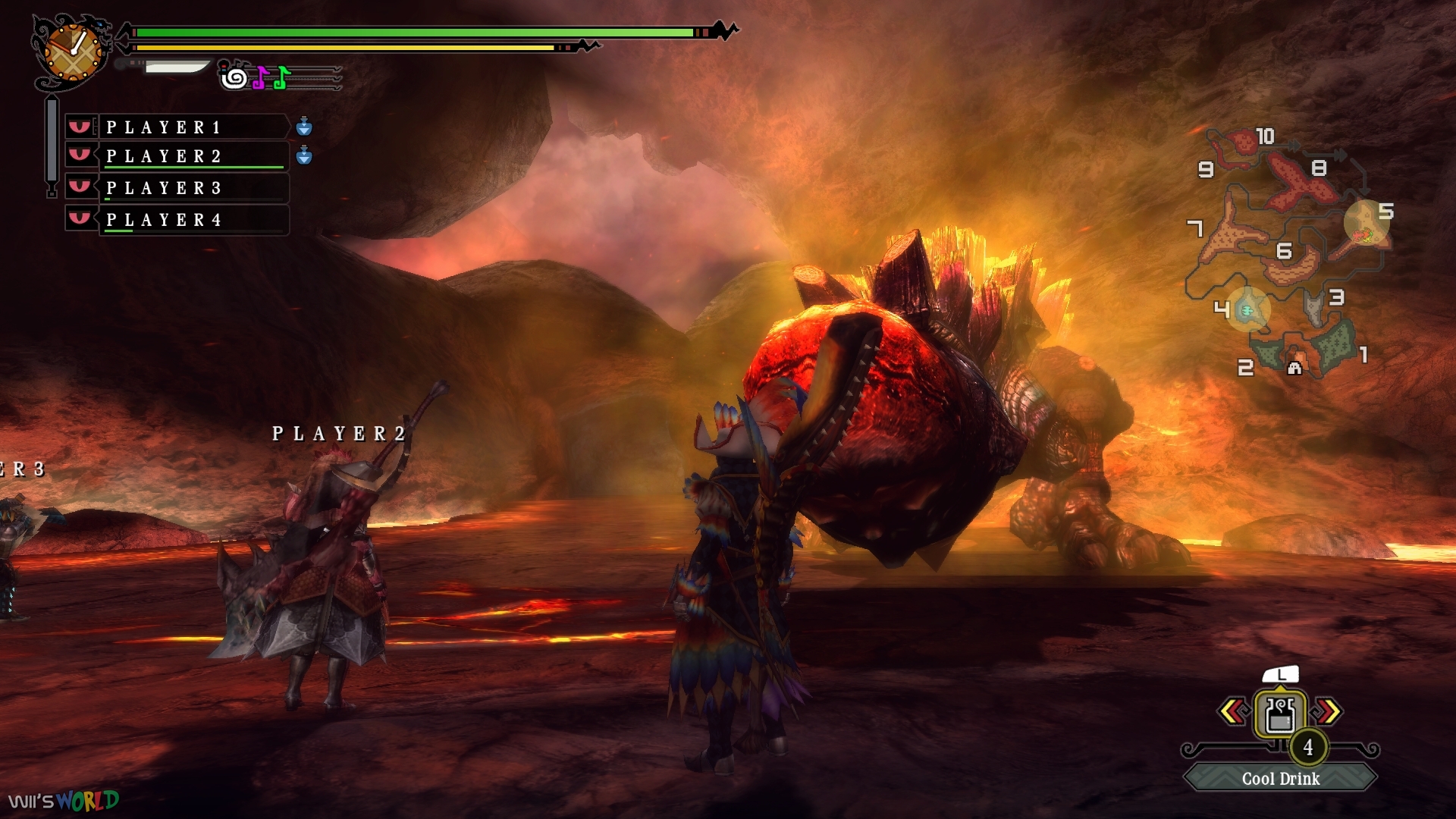 The quests are ranked, the higher the rank the harder the quest. You have urgent quests which are storyline based, if you do the urgent quests then you go up a rank. Capcom were lovely to offer 'Harvest Tours' of different hunting areas first before you start your quests. This gives you the chance to get your map and have a look around the place collecting items and killing smaller monsters before the real action begins.

You have other things to do as well, you can send cargo off on ships, harvest your own berries in your farm full of cats and also collect resource points by getting items and killing monsters - if you kill carnivores then you will get a lot of resource points. These resource points fund your harvesting and deliveries, so it's recommended to hunt outside of quests as much as you can.

The gameplay is quite frustrating initially. When I first played MH3U, my mind was plagued with "I wish there was a lock-on system" just to make hunting easier. However, the more I played the game the more I was able to adapt. 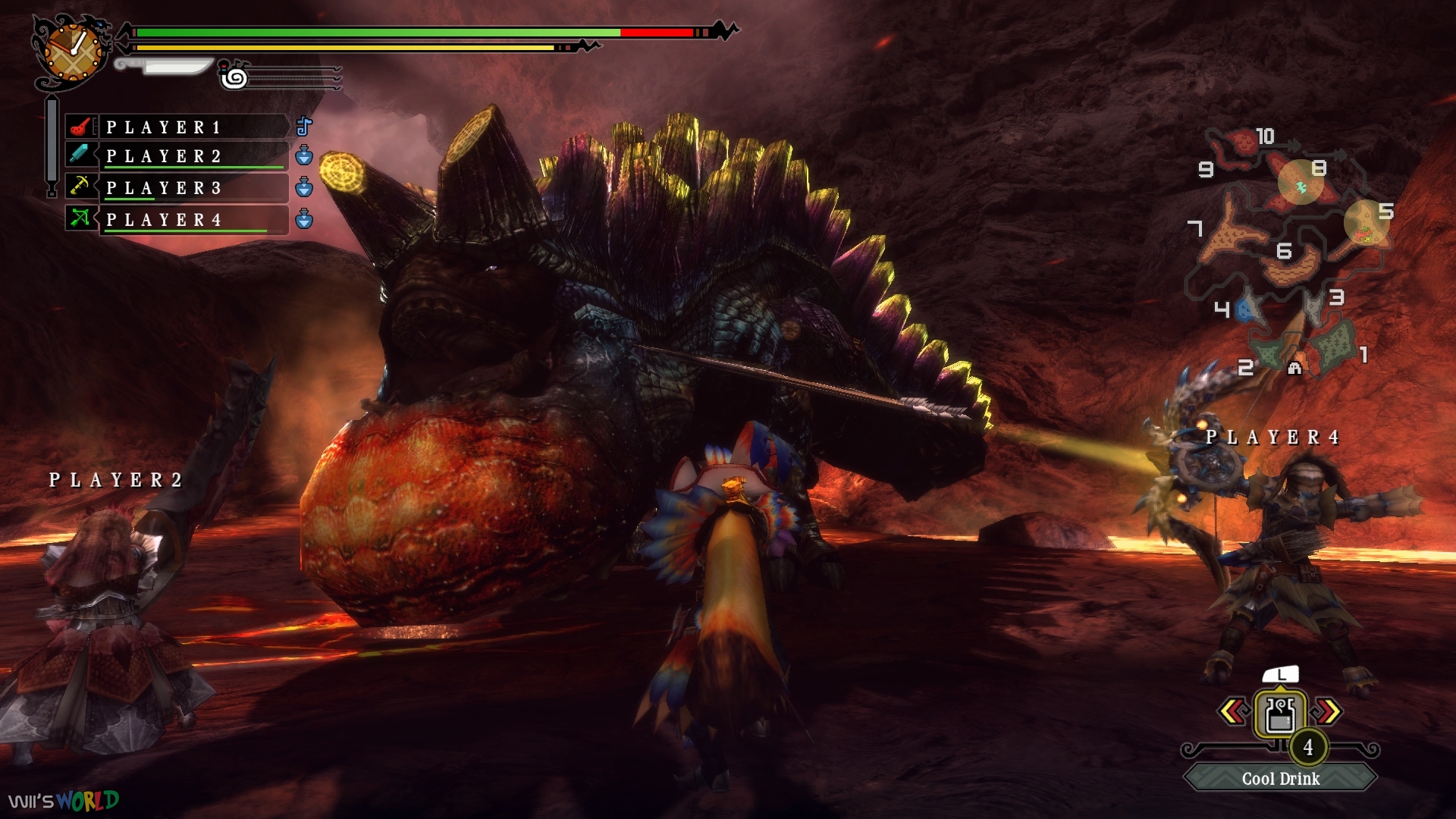 With melee weapons it's all about timing your swings correctly. You have different types of swings from overhead to sideways. Great Swords take ages to swing, whilst Katanas make you swing like crazy. With your firearm weapons there is an aiming system, that also needs a little time to practice before you master it. You have the gunlance, which is both a melee and a firearm, but it has no aiming circle, you just shoot when you're close to the enemy. You need to master these weapons and choose your favorite, but don't just stick with one weapon.

There are a variety of weapons in different categories that have different statistics. The heavier the weapon, the more powerful it is. The weapons are decorative - the Vulcanis blade is a favorite of mine as it looks quite pretty. As is the armor, the choice is normally either being defensive or looking fiiiiiiiiine. Or both.

The monsters in the game are wonderfully imaginative and challenging to fight against. They don't have a life bar, which is quite aggravating at first, so you will be slaying a monster until you see it is weak. If the monster is limping and shedding wyvern tears, you're doing a good job. 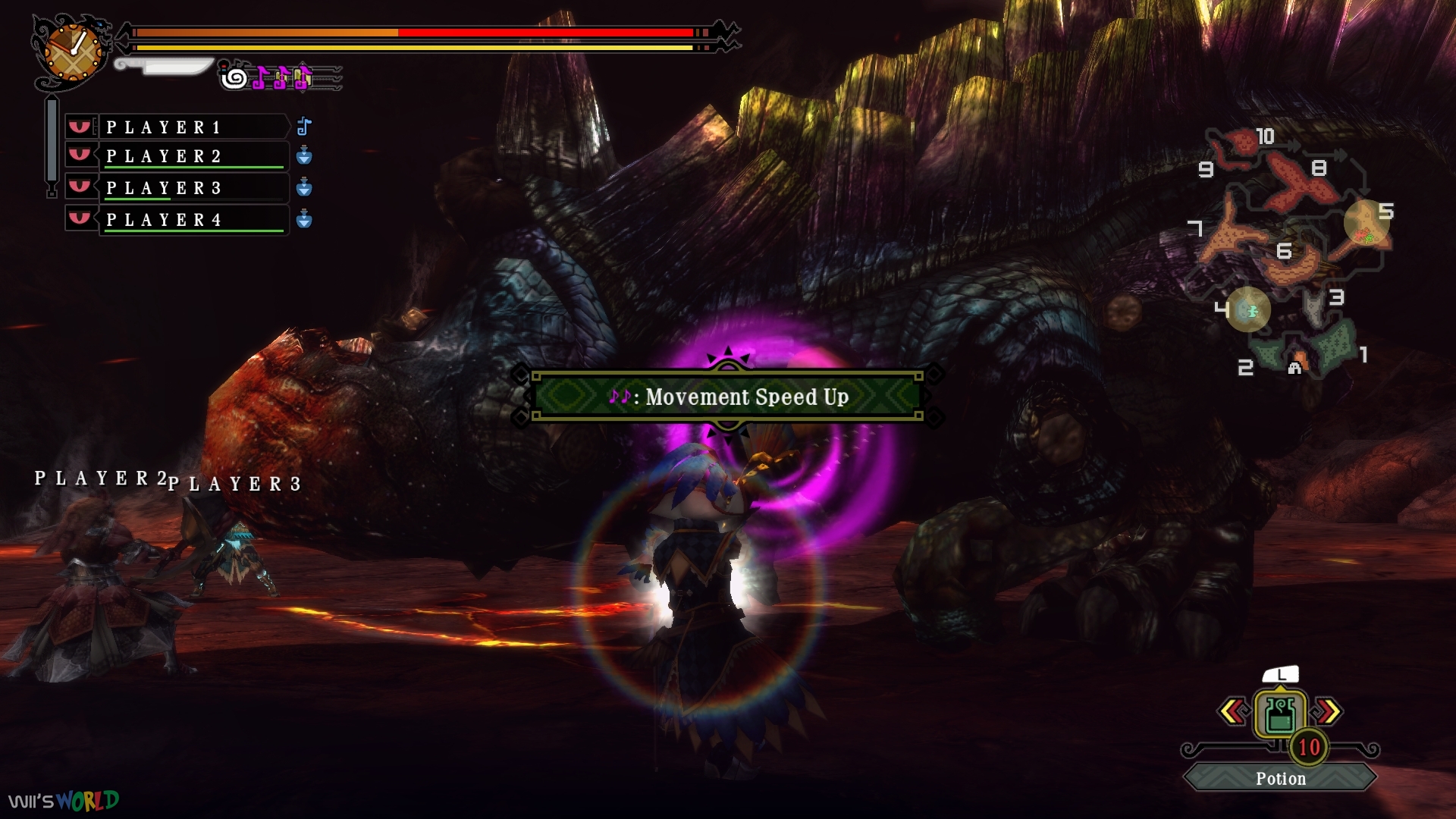 It's not just killing dinosaurs - you've got dragons, deer and even a happy armored panda that will rip your face off if you touch its honey. The monsters are based on different animals, past and present, and some of the animals we know in real life are even combined to make an ultimate monster. For example, the Qurupeco is like a towering pelican that loves setting you on fire. The variety is impressive and the monsters are deadly, especially the Rathian, a poisonous dragon, so prepare your antidotes.

You can combine items to make new and better ones while you're on your travels. A basic example of this is herb and blue mushrooms, with both of them you have potions, and if you find honey you can combine with potions and honey into mega potions. The gameplay for me is very engrossing, and I love it, however when you first play it can be overwhelming.

Graphically this game looks great in HD. It's more vibrant and alive with high definition, but some aspects are still Wii quality. The movements of the monsters aren't exactly perfect when they try to attack you, but they have mastered most of the movements quite well. There are still some clunky moments as it is a port from the Wii, but I don't think many people will care, as I didn't really that much. Of course, a full update graphically would have been preferable. Things like the blood effects and weaponry detail I will give credit for. 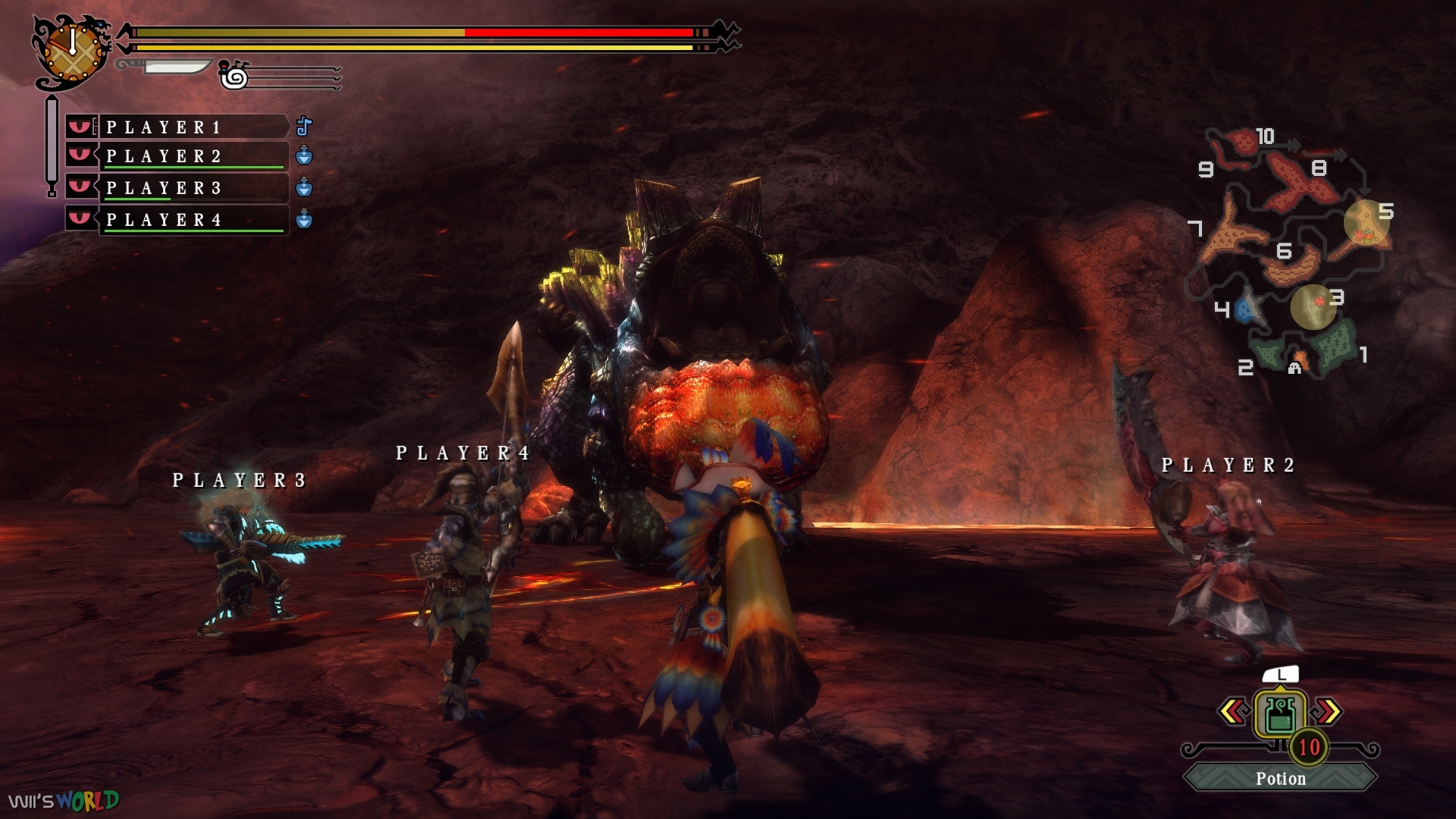 The music in this game is fantastic, it hits every scenario and setting with great effect. When a monster comes along and the music adds to the intimidation, you feel as though it's a real do-or-die situation. The steak making music is also brilliant, especially when you're in the middle of the battlefield and you accidentally press Y. Every scene has epic music that keeps it rolling into an even more epic adventure. It ranges from "awww this is lovely!" to "ERMAHGERD MERNSTER swingswing", adding that touch and emotion to what you're doing, no matter where you go.

I will mention online, as it is frustrating. The tavern area can be visited by yourself or with friends. There are barely any instructions to get you online with your friends, and it's even more of a ball-ache when you try to get your 3DS to connect to a Wii U system. There is no point in all this annoyance just to slay some monsters and collect items online, and it sadly damages the enjoyment of fighting online. However, playing with friends online when you eventually sort it out is a great experience as you're both on the battlefield slaying into a Barroth.

The quests are fantastic in its defense. With all sorts of monsters to fight against either out in the wild or in an enclosed arena. You will get coins for each triumph you achieve. 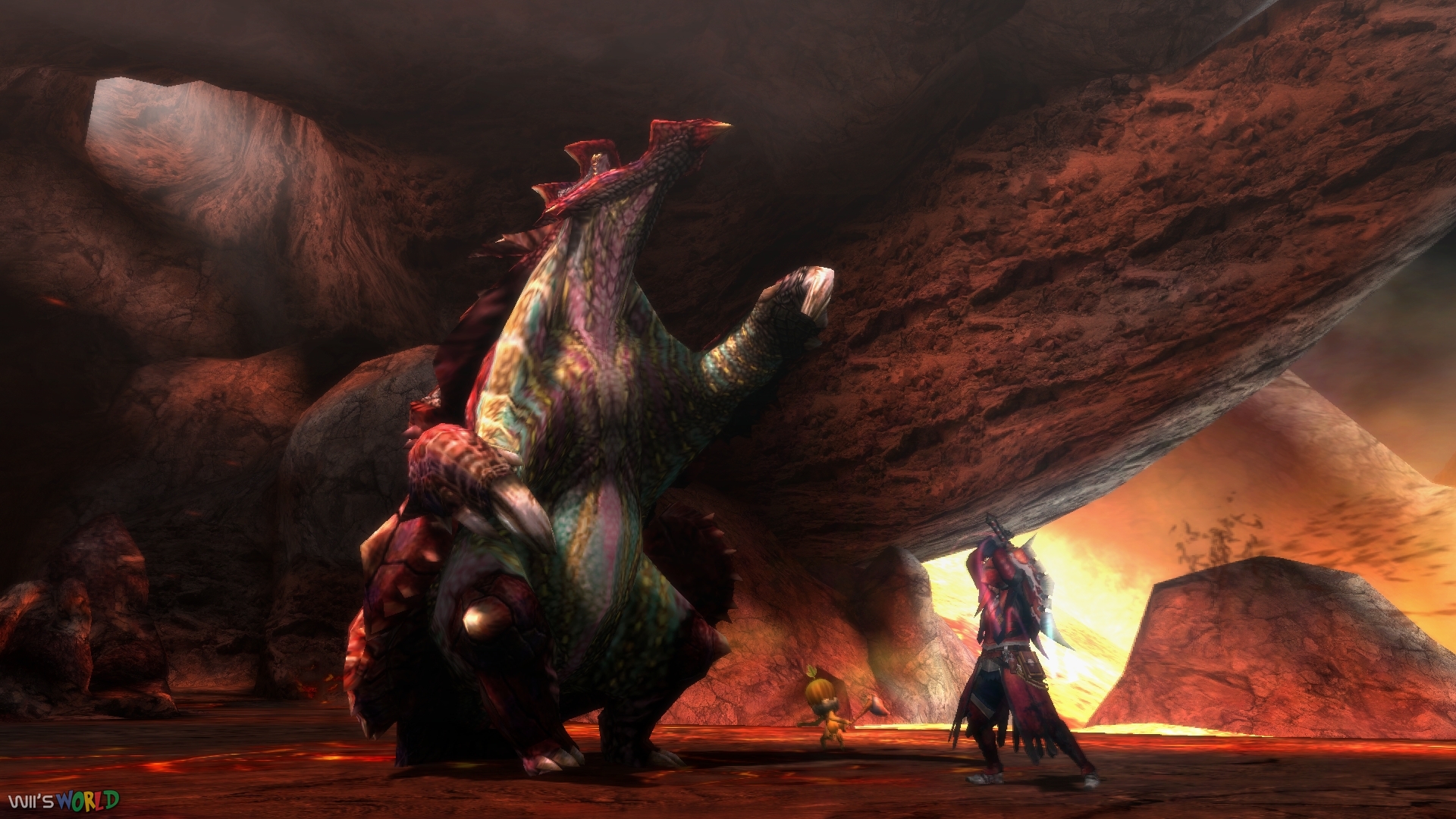 Monster Hunter 3 Ultimate will keep you hooked and you will want to play it consistently. The start of the game is difficult to get used to, but I do stress that it's worth persevering. It's a massive game with all sorts to do, the fights are engrossing and will make you feel intimidated.

Even though online is a shambles to organize with your friends, you can still get a great enjoyment playing by yourself. This game will take plenty of hours away from you and you wont even realize it. It's one of the best titles I have played on Wii U so far, and I recommend it to anyone who is raring to challenge anything in their sights.