Mini-game bliss that could have done with online play.

There are several options available that involve a mini-games compilation made by different game developers. Some of them are really good (Wii Sports) and some of them are terrible (*cough* Carnival Games cough.

At first Nintendo Land didn't appeal to me when I first heard about it as it sounds like a cash-in game. I obviously have a lot of respect for Nintendo, but I was hoping this game wasn't going to be like most Mario Party games and drag on. Nintendo Land is a collection where the games are themed with Nintendo titles, just in case you didn't get the hint in the title. If you're connected online, you can communicate with other mii's and inform them on how good or bad you are doing on a current game. 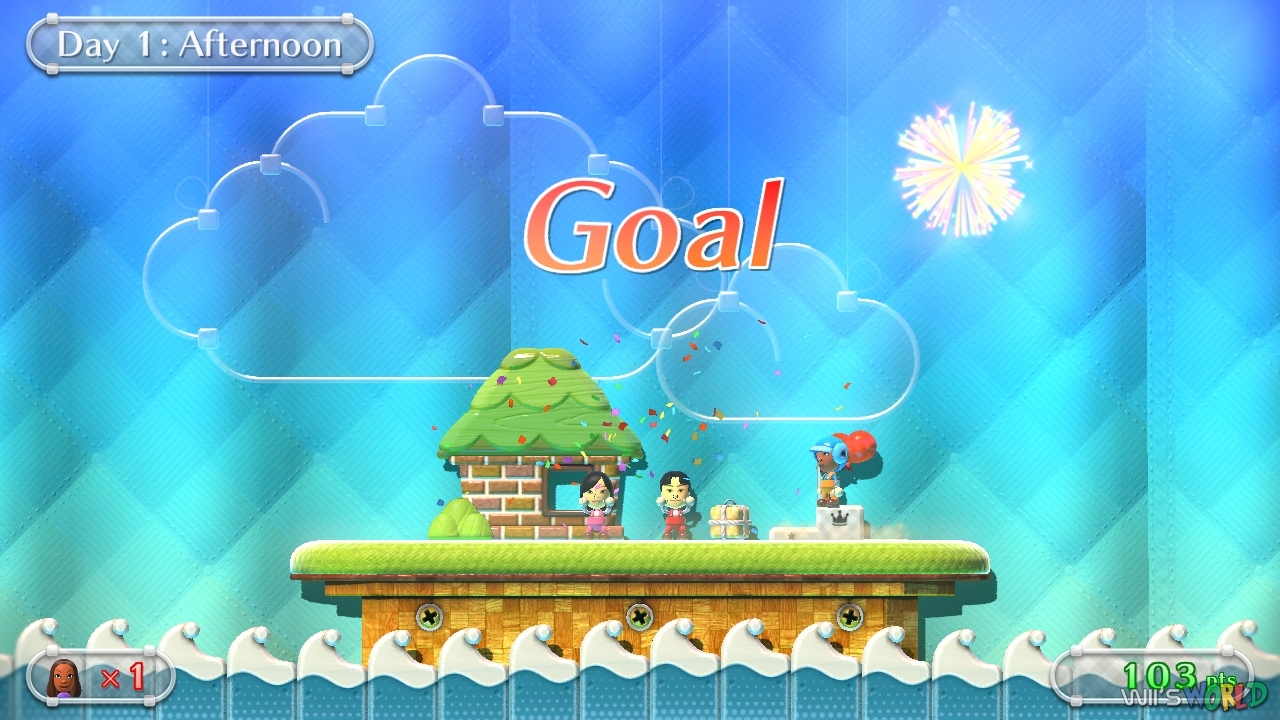 There are twelve games in total, thirteen if you class the Tower Plinko game which is really enjoyable when you collect coins. Nintendo Land is a nicely constructed game that offers help when you are stuck on anything, the tutorial is always there for a quick practice. Most of these games involve the GamePad, especially if you're playing in single player mode.

There are six entries in the solo category, each with their own different tales that make them stand out. Some games in the solo section have you using the GamePad motion sensors to tilt left and right. These games are Captain Falcon's Twister Race and the other is Donkey Kong's Crash Course. Twister Race uses the tilting mechanism in order to avoid objects and get onto speed boosts and ramps, while in Crash Course you have to use the trigger buttons and analog sticks to help tilt your way through to the finishing flag. Tilting is also in Octopus Dance, but the main controls for that in the earlier stages of the game are the analog sticks.

Those three games are excellent in their own right, however Crash Course stands out due to the constant challenges that require some thought, it's the only game out of the three that has more to offer than meets the eye. 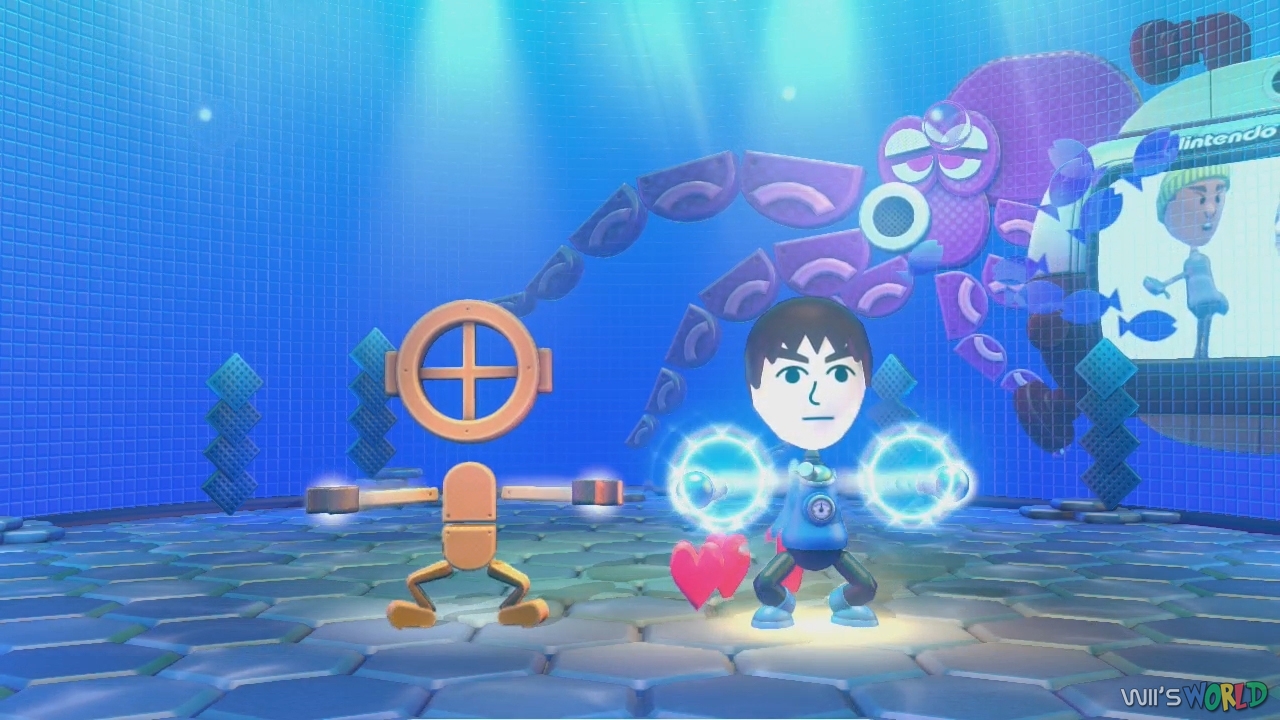 Crash Course's main bad point is once you have completed a level you can't continue to the next level if you haven't been there before, so you will have to start again in order to play the next level. Twister Race may only be just left and right movements, but the areas get a lot more difficult as soon as it reaches the halfway point, while Octopus Dance increases with different and more challenging dance moves the more you progress.

The other three solo games are all stylus related, those being Yoshi's Fruit Cart, Takamaru's Ninja Castle and Balloon Trip Breeze.

Fruit Cart lets you draw a path that leads Yoshi to eat fruit on the screen and leave through the doors to the next level. Ninja castle requires shooting star blades at paper-like enemies. Trip Breeze practically has you scraping the GamePad with the stylus as you battle against tough winds. Fruit Cart gets difficult rather quickly as there are holes to avoid, it's a clever game where you have to draw past the objects on your TV screen, but they are not shown on the GamePad. Trip Breeze makes you attack the GamePad like a cat attacking a knitted ball as you go nuts with the stylus, which can become frustrating, but it is wonderfully challenging. Ninja Castle is a brilliant rapid fire game with a similar approach as you cause complete carnage to adorable little ninjas that you sadly have to kill (confetti comes out of them when they die, woo!). 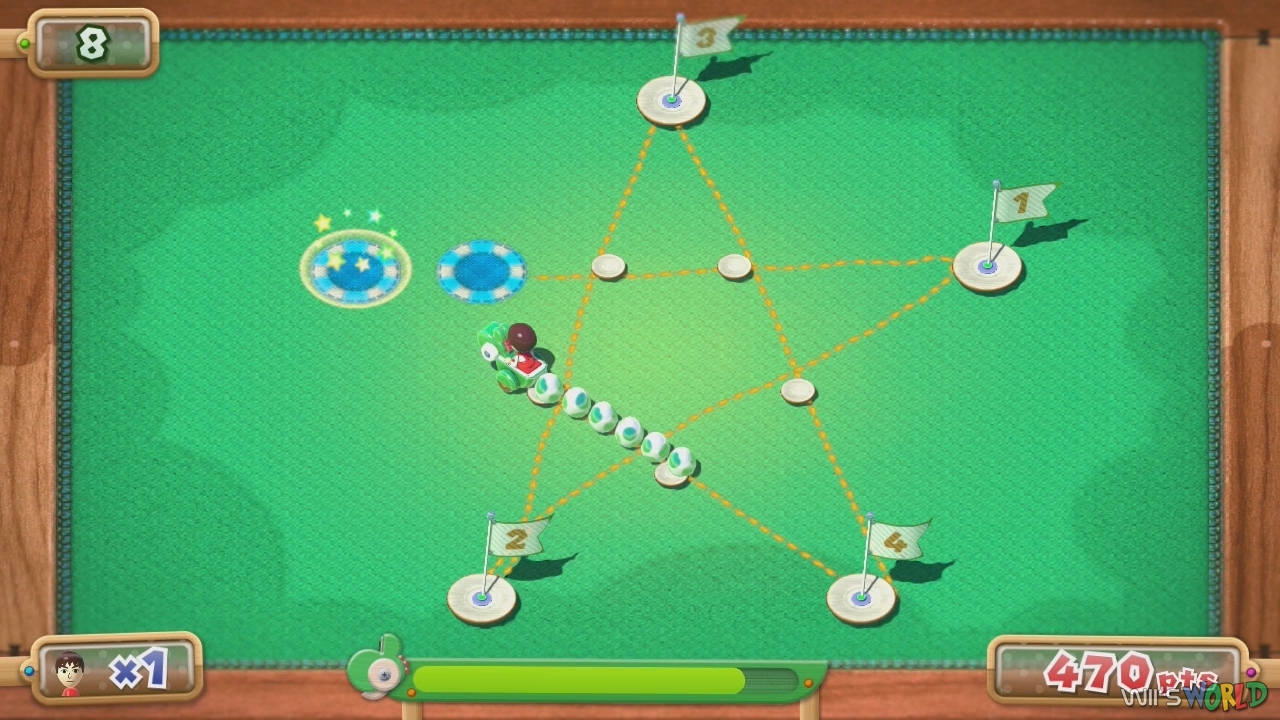 The next two sections have three games each, so I will start with Team. These games can be played either on your own or with other players, so it's nicely varied. The three games are The Legend of Zelda: Battle Quest, Pikmin Adventure and Metroid Blast.

Battle Quest and Metroid Blast are both similar with the controls as you move the GamePad around in order aim and fire. The right analog stick is mainly required in Battle Quest to charge up your arrow and fire them at enemies, Metroid Blast uses the GamePad as you fly around in a ship going all guns blazing, using both analog sticks. Pikmin Adventure is a run and stomp game in both multiplayer and levels. This is one of the best co-op games, all players go through the level in a badass fashion kicking enemies with your head while collecting nectar. The three games increase in difficulty the further through the 'campaign' you go. The ship in Metroid Blast can be irritating to control at first, but once you get the hang of it you can easily fly around shooting missiles everywhere.

'Competitive' is the last category. This section includes Mario Chase, Luigi's Mansion and Animal Crossing: Sweet Day. In Mario Chase you go around a maze dressed as either Mario or Toad, as Mario gets chased around the maze for a small time while trying to avoid being caught. Luigi's Mansion is similar with the maze thing, only you have burn whoever is playing as the ghost who tries to catch you, and Sweet Days is similar to Pikmin with the controls, but only you have to carry sweets around and drop them into flags before the time runs out, escaping from the guards. You control the guards on Sweet Days with the analog sticks, which is weird to start off with, but you can become nice and sneaky with them when you catch the other players. 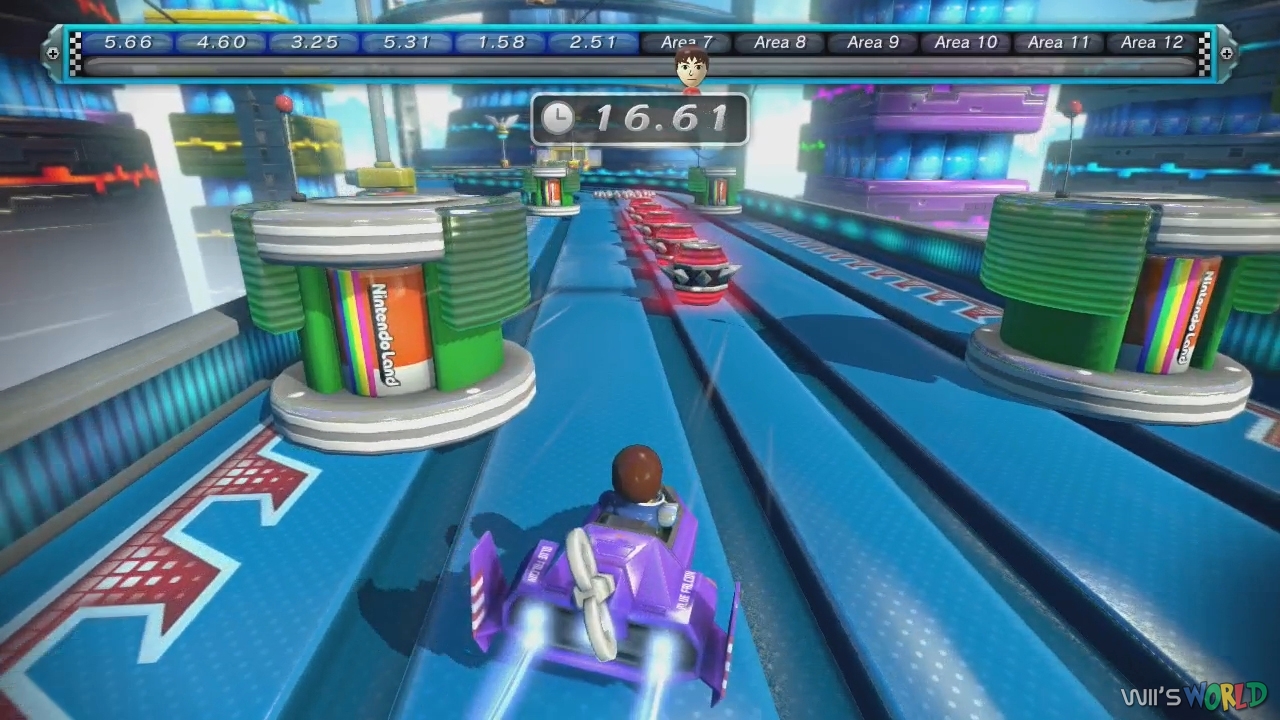 The person with the GamePad on Mario Chase and Luigi's Mansion always has the main advantage as they can see everything while legging it across landscapes or stealth it whilst being invisible. The one main negative thing I can say about Luigi's Mansion is how generous the time is. Five minutes you have to either get merked by a ghost or to panic run around the map. The game when I have played it with my roommates has never been five minutes, it barely lasts two minutes.

The attraction tour is possibly one of the best aspects of this game, where you can get everyone involved, you even get to ride a train into the sky! It shuffles the games randomly so it is a fair competition and it can be very addictive when you're with people who are hungry for victory. With five people you can play for ages, just challenging each other to different events that some people are good at or not. When you're in a spot of doubt, you will have either the double point, triple point or the dreaded point swap cards to help you. 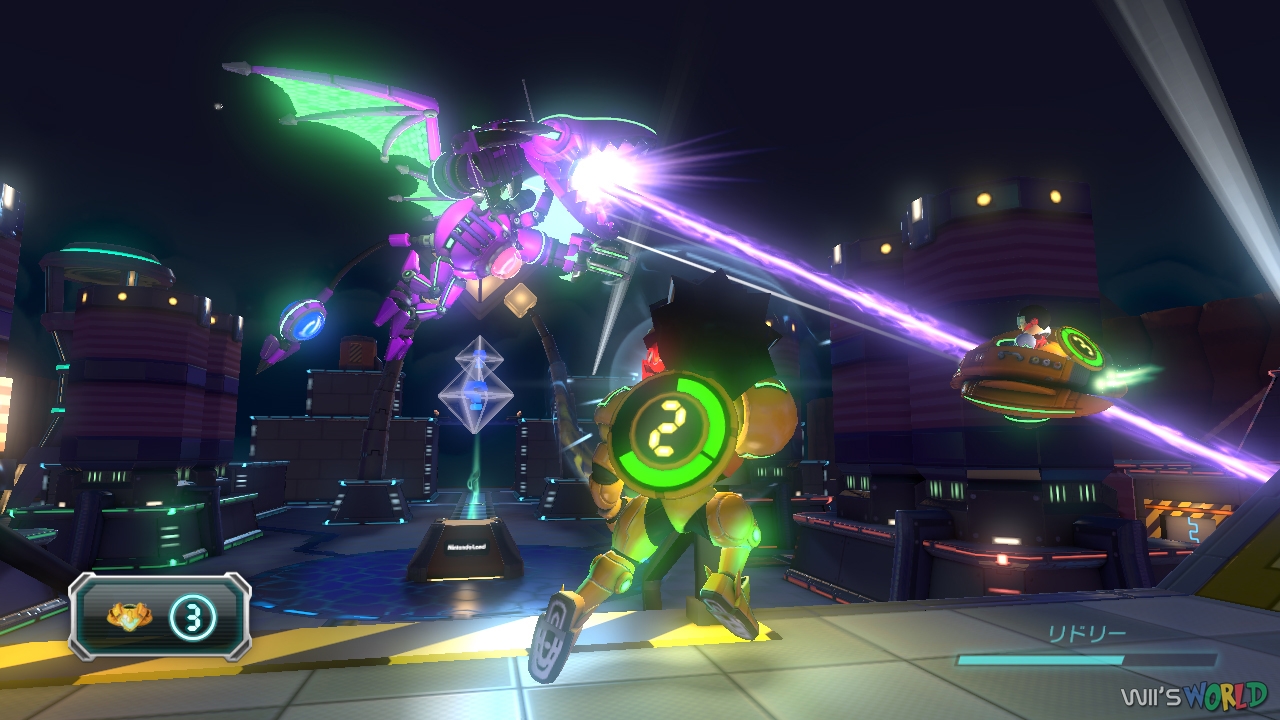 All twelve games are very good in their own right, all of them are addictive, some more than others. The competitive ones have to be played with at least two players, though at least it could have been altered so one person can play them. The repetition hits when you do solo missions, once you've done all the single player stuff and hit a star rating there is much more to discover, but it's sometimes the same old feeling you get with the previous levels.

Winning the prizes is easy when you get loads of coins, I eventually mastered Crash Course with my girlfriend and before we knew we had 500 coins and we used them on the Plinko Tower game.

The main problem I have with Nintendo Land is that there is no online play, I think that would have been a key winning point if it was in place, Miiverse is a nice feature as it makes the attraction park colorful and enjoyable, but you don't really want to sit there and JUST chat to other people do you? 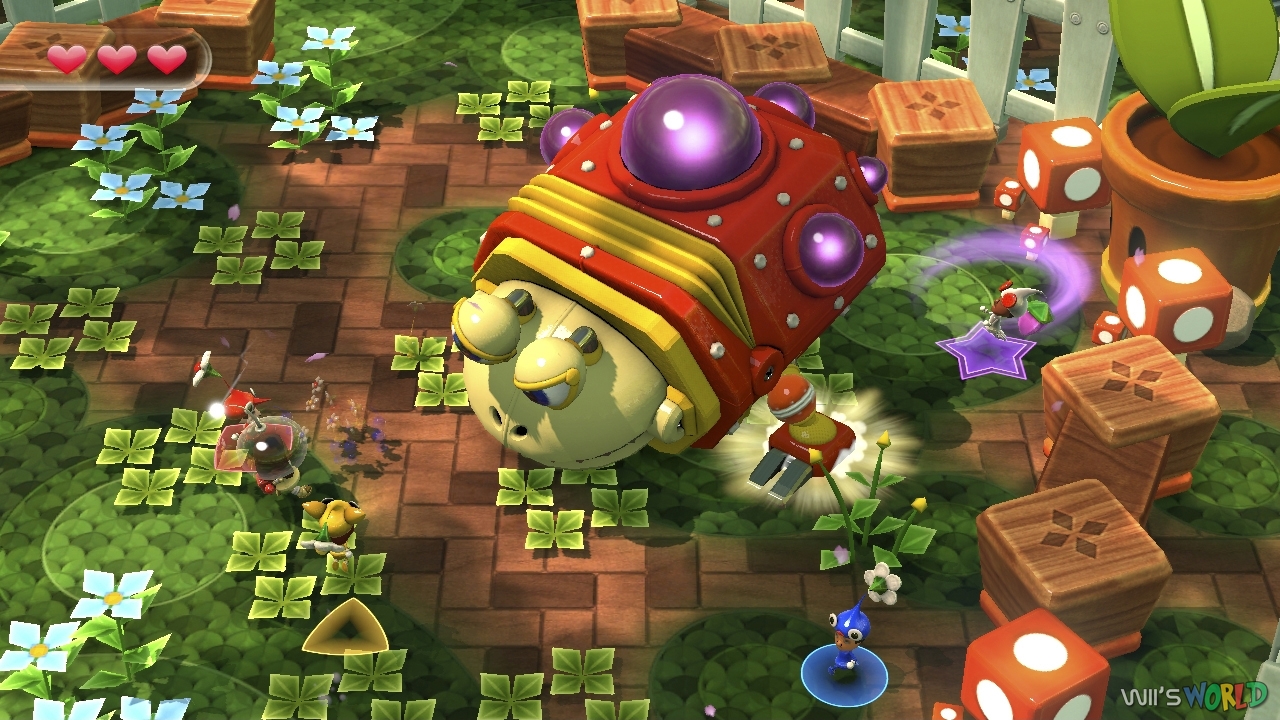 I sound like I'm moaning, but it is a great game, all the mini-games work together to make a nice team that could even put The Avengers to their tests, well, maybe. The games do wander off in twos when it comes to similar playing style, but the experience does bring the best out of the GamePad.

While this is a fantastic title for the Wii U with its mini-games and also the extremely competitive attraction tour, there still could have been a lot more done with regards to global interaction and some variety in the levels, rather than just the same thing every round.

Good review. I agree with you on most of this, and yes the game would be a monster-hit with online play. This is but one of several games on the Wii U I have played that would have knocked it out of park with adding in online play. Imagine an online tournament mode with this game. It would be awesome.