The Blob is a third person action maze challenge with a colorful, fun and shapely animated character everyone will love!

Featuring ball-rolling and color spray gameplay mechanics of captivating fluidity and an evolutionary design, gamers will laugh and play for hours.

Are you ready to wreak havoc in the streets of an alien city? Enter a world where color is outlawed and the citizens are like zombies. Your mission as the Blob is to return color into the world so the citizens can snap out of their trance-like state and become funky!

As the Blob uses the city as a playground to decorate he is forced to take on the evil INKT Corporation agents. Constantly under attack, the Blob in his own quirky way fights back. Rolling, bouncing and crushing are his weapons!

The object is to color and/or stencil as many buildings in the city as possible while avoiding the enemy. Race against time moving at Blob speed, or choose your own pace. The city is a canvas and The Blob is your paint brush!

Take the action to the next level. Compete against 2-4 other players in
the quest for multiplayer Blob supremacy.

This fresh new concept will appeal to everyone. Casual gamers will enjoy the simple and infectious aspects of the game such as the fluid animation and wacky Blob maneuvers. The hard core gamers can take on the challenge of earning as many rewards as possible and unlocking several hidden elements. It's an experience for all to enjoy that's like no other!

De Blob has no review on Wii's World. Write a review 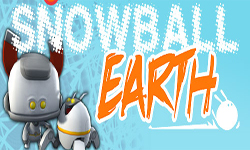 Snowball Earth - Ronimo's cancelled Wii game
Here's something you might not know. Swords & Soldiers developer Ronimo Games were working on a full disc game for Nintendo Wii, until they...

De Blob 2 coming to Wii and DS
Some surprising news today, THQ has announced that a sequel to "de Blob" is in the works for both Nintendo Wii and DS. The game is...

De Blob commercial
De Blob is now out at retail, and so far it's getting a positive buzz. The Official Nintendo Magazine gave it a score of 92%. To coincide...

de Blob team announces new game
The student developers behind the original concept for De Blob on PC have formed a studio called Ronimo Games based in Utrecht,...

Blob Castle box art
Some new box arts have seen the light of day, both of them US-based. First we've got quirky paint-em-up De Blob, it looks...

De Blob gameplay video
Here's a video interview with Nick Hagger, Producer of Dutch game De Blob. Seems to be shaping up well, maybe it's one to look out...

Looks innovative, I couldn't really gather much more from those screenshots.

De Blob, the next Katamari Damacy (so says everyone).

This game actually looks very promising. I will most likely be getting it.

What kind of game is this?

You're a blob that colors a lifeless, colorless, boring city.

This game looks pretty impressive. Students made this game! I love the originality.

This looks fun. I fail Art every year.

Looks good, better be lengthy though with no weird creepy people or music.

I want this game a LOT.

This had better be good. I don't trust THQ, it's like Sierra (Crash) and Acclaim after 64 (Mortal Kombat).