Published by Sega, Developed by Platinum

MadWorld is one of the most recent releases by Platinum Games, a studio made up of former veterans of both Capcom and the now defunct Clover Studios. These are the people that brought us such stylish and awesome titles as Viewtiful Joe, Okami and Bayonetta. Their last, and currently only effort for the Wii is MadWorld, another stylish and incredibly gritty epic of violence and destruction. While MadWorld may have sold poorly, it doesn't deserve its lack of recognition.

MadWorld begins with the fictional Varrigan City being locked down. Some sources claim that this is due to a terrorist attack, while others maintain that the city has been blocked off due to viral contagion and a team of marines is supposedly dispatched to save whoever is left inside. However, those on the inside know what's really going on. A man simply named Jack infiltrates the city, discovering that Varrigan City is actually the latest site of a centuries long contest of violence. The contest is now televised live as a pseudo-reality television game show called 'DeathWatch', complete with thousands of cameras and color commentators. It's unclear initially who Jack is working for or with, but the player's goal is simply to help him rise through the ranks of the DeathWatch players. The story in MadWorld attempts to make statements about the excesses of the rich, the ignorance of the lower class, the potential (or lack thereof) for world peace and corporate greed, but in many ways they feel shoehorned and inappropriate considering the content of the game itself. 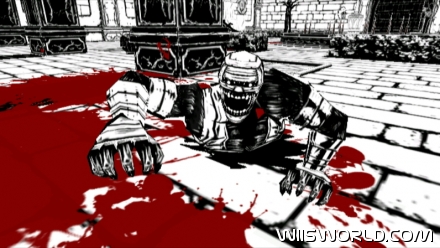 The best way to describe MadWorld is that it's a tribute and evolution of the old beat 'em ups one would find in arcades, but incredibly over the top in its tone, violence and atmosphere. As a DeathWatch contestant, Jack is trying to win. In order to win, he needs a lot of points. To get points, players can beat up enemies with their fists or use the chainsaw attached to Jack's metal arm, but the game encourages you to be 'stylish' with your kills. Players can subdue, impale, crush, smash, slash and inflict many other forms of bodily harm upon foes; combining them onto one enemy gives far more points than just killing it outright, so it's best to experiment with the tools at hand. While for the most part this gives the game a lot more variety than a hack and slash title like Dynasty Warriors, it does begin to grow slightly stale and repetitive before the game's last few areas. In addition, certain levels don't work with this combo system as well as they could, especially the second stage in the goth themed area.

So what exactly do these points give you aside from the chance for a higher rank? Ultimately, the goal is to get enough points to fight the stage boss. There are three bosses per area, with two stages to gain points. The points also give you power-ups which increase your lives and health, as well as powerful new weapons like knives and spiked bats to use in place of your fists. The points also give you access to the 'Bloodbath Challenges'. As the show's reigning champion, the Black Baron (who looks like the worst stereotype of a black pimp you would likely ever see) explains, these game show style challenges usually involve you throwing guys into whatever deathtrap is provided for huge point totals. The challenges include the usage of exploding barrels, jet turbine engines, speeding trains, explosive Soda Pop and giant dart boards. These are timed so you'll only get large point totals if you're skilled, but these also get slightly repetitive by the end of the game. Their executions are different (in more ways than one), but ultimately they all involve sending helpless goons to their doom.

Thankfully, the bosses are much better paced. As mentioned earlier, each area of the game involves two stages and three boss fights. Each of these areas are given 'themes'; the first area is downtown city and others include a stereotypical Chinatown, a Gothic castle and cathedral, and a space age techno center. The first boss alone is a humongous muscled behemoth called 'Little Eddie' and the bosses continue to become increasingly more epic from there. A pack of wolf pelt wearing shamans, a bad ass sumo wrestler and a guy who uses jet turbines instead of hands (called Baron von Twirlenkiller) are all highlights in the game's awesome boss fights. As if the big baddies weren't enough, there are also mini-bosses scattered throughout the stages, each neat and tough in their own right. 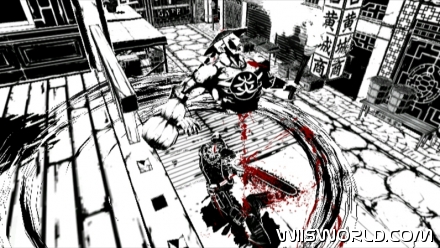 The visual style used must also be mentioned. Perhaps to compliment the game's tone, make up for the Wii's lower processing power or simply because Platinum wanted to, MadWorld is illustrated in a black and white visual style reminiscent of Frank Miller's Sin City. The only other color than black and white seen in the game is naturally red, and comic panels with onomatopoeic sound words are abundant, further cementing the game's graphic novel inspiration.

For the most part, the sound is good in MadWorld. The music mostly consists of rap and hip-hop created specifically for the game; personally, this reviewer doesn't care for these genres, but they work well for the most part in MadWorld. The sound effects are good too, especially Jack's chainsaw buzzing through limbs and weapons. The highlight of the game's sound however, is the voice work. Not only are the character voices done well by veterans such as Robin Atkin Downes (Metal Gear Solid 2) and Steven Blum (Cowboy Bebop, Mass Effect 2), but DeathWatch's color/comedic commentators are performed splendidly by comedians Greg Proops (Whose Line is it Anyway?, The Nightmare Before Christmas) and John DiMaggio (Gears of War, Futurama).

MadWorld is a good experience while it lasts, but is a fairly short game, and will likely last most players about six to seven hours the first time through. Though players can go back to complete 'DeathWatch challenges', fight bosses again, and even get new weapons on second playthroughs, there really isn't much incentive to go through the game more than once. Still, with its current price at only around ten dollars, MadWorld is terrific value and a worthy addition to any Wii owner's library... as long as they aren't too squeamish.