In the God tier of Nintendo karting games

One of the most well known racing games finally gets its 8th title in the series. With the Wii U sadly becoming the left out fat kid in a PE class at school, does Mario Kart 8 have enough to get the attention it deserves?

The loading screen is normal, I will start off with the single player mode. You have everything from the previous classes up for play, all the 50cc, 100cc and 150cc classes to start you off. This game borrows heavily from Mario Kart 7 in most aspects, which is a good thing as I see 7 as one of the best with great tracks. Grand Prix, Time Trials, Vs Mode and Battle are the available options and have been throughout many of the games in the series. 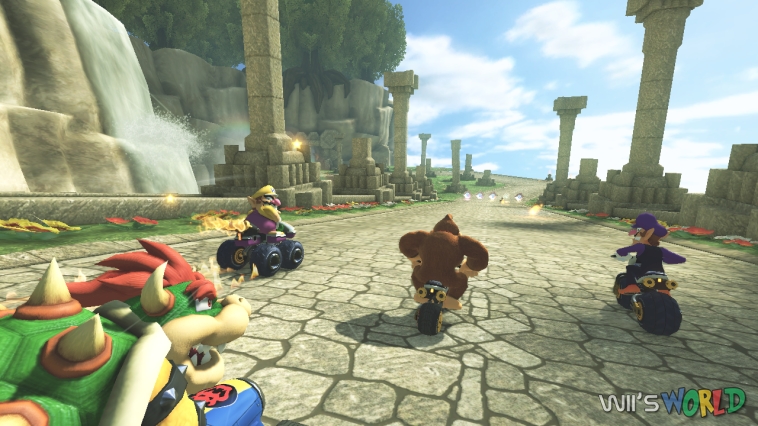 Grand Prix is obviously the first thing anyone will go for, and I have to say it is fantastic. The 16 new courses look absolutely stunning, showing how much effort has been put into this game. The visuals are amazing, especially on tracks like Bowser's Castle where a huge Bowser punches the roads to make them wobble. The details off the road are nice to admire as well, if you have time to look around during a race or a lazy stroll in Time Trial then have a look at your surroundings and enjoy their level of detail.

Sound is a key part of Nintendo games, like the Baby Yoshi's singing in the New Super Mario Bros. U in time to the music. The track Electrodrome is like a huge rave, but on a race course, with flashing lights, dancing Piranha Plants and trailing colors from your drifts, and in relation to the sentence before this there is a jump that has steps, and each step you land on is a synth stabbing sound.

Vs Mode lets you race whichever stages you want in any order, pretty much letting you make your own Grand Prix. Battle Mode isn't the same good old battle we know and love, mainly because the tracks are recycled from the cups in the Grand Prix section, which is a waste due to that fact there was a chance to make more of the round tracks like there were on the previous Mario Kart games - once there are two people left to fight each other on battle it takes ages to reach one another, especially if they are on opposite sides of the map driving in the same direction. I mean, sure you can turn around to charge at them, but what if the opposition turns around too? Half of the time it's an endless goose chase, the gameplay in battle is the same old enjoyable balloon war, just that it is a lot less frantic than I would of wished for with a round track or stadium to keep the racers contained and shooting shells and avoiding other racers with the star power-up. 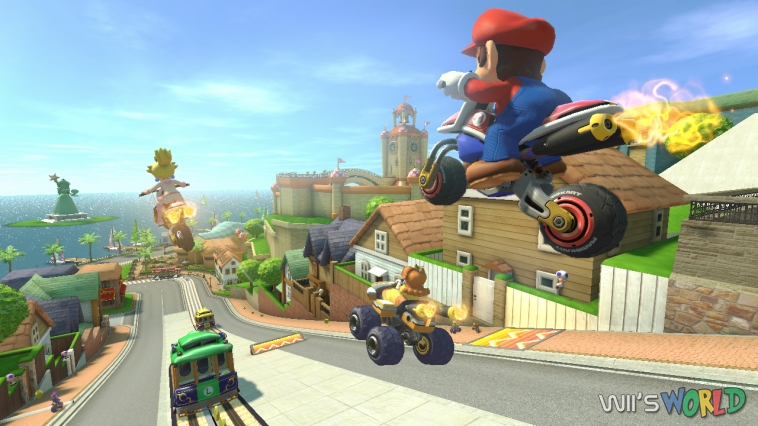 The controls for Mario Kart 8 are as enjoyable as it can get. I never got why the automatic and manual controls were a thing in Double Dash and Mario Kart Wii, when these controls are simple and incredibly effective to use. The A button is to go, the R/ZR button to drift, the L/ZL to fire an item and the analog stick to move, simple as that. You can perform better drifts at ease, unlike in Mario Kart Wii.

The retro tracks have beautiful visuals as well as the new tracks, and it's great to see these courses again in wonderful HD quality. This is what the Wii game should have been, along with the graphics, it's just amazing to look at.

With the zero gravity and Mario Kart 7's gliding and water propelling, the karts can do more than they ever did. The kart constructing from Mario Kart 7 also makes an appearance and has even more choices to make your ideal vehicle than ever before. The new items in the game are brilliant as they make Mario Kart more like a proper race as well as a huge fight fest. The new items are the Boomerang Flower that you can throw forward 3 times, the Super Horn which can get rid of anything around, mainly the blue shell, the Piranha Plant which gives you speed boosts and whacks any player out of the way and then the Super 8, a monstrous collection of weapons to get you through. 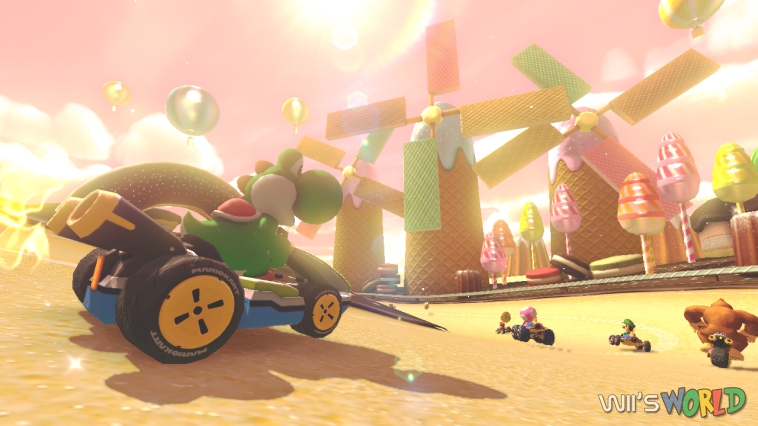 Everything seems more polite and generous in Mario Kart 8 than it has done in the previous games, especially how the items are so randomly generated that I got a bullet bill in 4th position. When it comes to the music it is all just as good as the rest of the game, rather than the organ sounds and the jazz sections there is a great use of classical music and experimental rock music. It's all a wonderful gel, Bowser's Castle has such a good guitar solo and Cloudtop Cruise has a great string section to it.

The main thing to keep this game going is of course the Multiplayer, preferably online. The in the house fun I have had with Multiplayer has been great and it is way better than playing against the CPU, it has all of the options from Single Player besides Time Trial. However Online is the one for those who not only enjoy playing with people in their homes, but for those who like a video game all to themselves.

The online competition is far more joyful and intense than it is on the single player mode, and this game once again borrows heavily from Mario Kart 7 with the track voting system, which is a success. The lifespan on this game is endless thanks to online, even if you do poorly there is that inner ambition that you want to win against everyone there, the race is more natural and also more passionate as you aim to get loads of points. 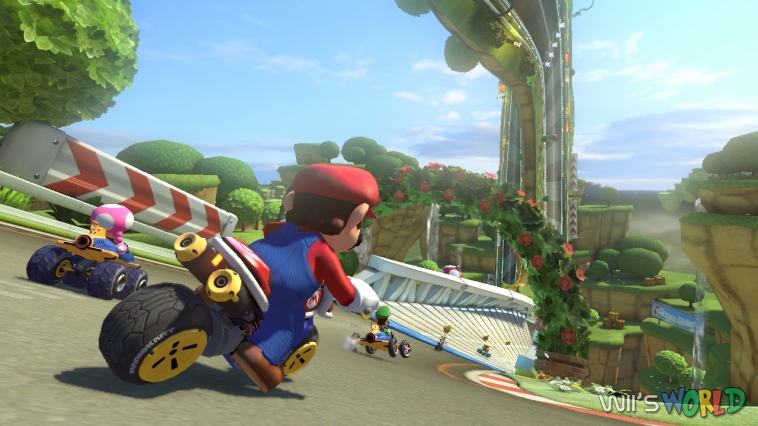 Mario Kart 8 is truly a landmark for not only the gaming series, but out of all the games Nintendo have made in recent years. Its imagination, color and detail is flawless, there is so much to see in so little time when you are in a race. The racing is slick, the music is divine and the online is more addictive than watching Breaking Bad with toffee popcorn, well, maybe.

Besides the laziness in the track design for Battle mode, it is one of the best games Nintendo have made in years, with big thanks to Namco Bandai, maybe we can see Pacman in a mainstream game rather than the arcade games, aye? So what are you waiting for, forget about saving up for a fridge or a lifetime's supply of Kool Aid, get Mario Kart 8 and, even better, a Wii U!

Nice review. If I could ask, how did you get those pictures into the review? I'm working one one myself, and I don't want to accidentally mess anything up.

Heya Garrett, the images are put in there automatically using screenshots from the game's own page.